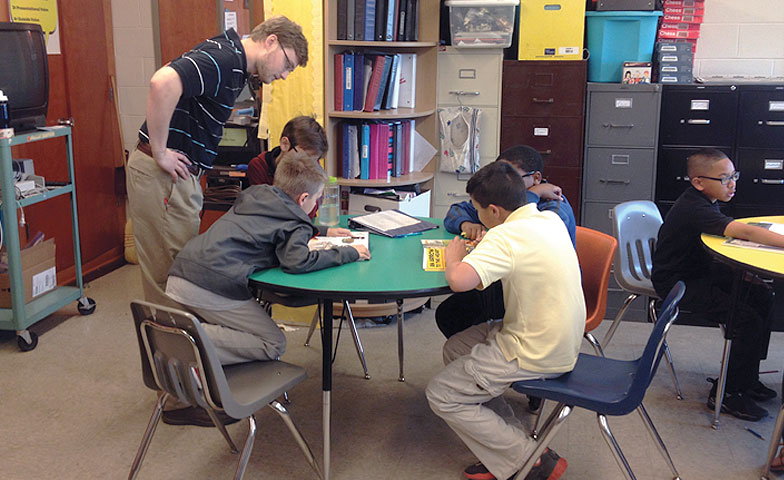 At the heart of every great story is a hero who triumphs over adversity.

Hero stories, including Greek myths and legends, empower students with the knowledge that others have faced and overcome similar challenges. They provide opportunities for students to identify with a hero and his or her story. Greek myths and legends are especially powerful to incorporate in middle grades classrooms where students are struggling to discover or create a sense of self, a place and meaning in their world.

Consider Theseus, the mythic king of Athens, for example. A mere mortal, he faced a variety of challenges young adolescents might identify with, including a father who did not care about him, high expectations for his success on the battlefield, relationship problems, and the consequences of some very poor decisions. This particular story demonstrates how perseverance leads to success in the end.

Heroes in the Classroom

With that in mind, we developed a three-lesson unit that weaves heroes from mythology with modern-day heroes and then connects them to students’ personal lives.

Lesson One: Hero stories introduce students to mythological heroes such as Hercules, Theseus, and Penelope. Students read a Greek myth and then identify the attributes of a hero. Heroes in the myths should appeal to both boys and girls, the accounts of the heroes should be age-appropriate, and students should have access to multiple accounts of each myth.

After reading the accounts, the students realize Greek heroes, and maybe all heroes, have both good and bad qualities.

Next, students identify and illustrate a quest cycle of one of the heroes, then write their own definition of a hero.

Students study historical figures and decide if they qualify as heroes.

Lesson Two: Students study historical figures to determine, based on their own definition, whether those historical figures qualify as heroes. They once again see both positive and negative attributes. To foster discussions about what it means to be a hero, when we implemented the lesson, we incorporated historical figures whose hero status is debatable, such as Robert E. Lee or Christopher Columbus. Students had the opportunity to discuss whether the good brought to society outweighed the bad.

To expand students’ understanding of heroes, we also included Maya Angelou in our unit. Although heroes are typically associated with acts of physical strength, Maya Angelou possesses mental and emotional strengths that make her heroic. She overcame both personal and societal challenges to positively affect the world. This different perspective of a hero was important to include in order to provide heroes who were relevant to every student in the classroom.

As students analyze each historical figure’s quest cycle, they realize that there are always helpers participating in a hero’s quest and that the completion of one quest often leads to another.

This knowledge empowers students to see life’s challenges in different ways. Realizing that challenges are a normal part of life and that overcoming challenges reaps benefits for both the individual and society teaches students the importance of perseverance.

Lesson Three: The final lesson connects the concept of heroes to students’ personal lives. Students discuss heroism as it relates to their own lives and what it means to be brave in the middle school.

They explain how they could be a hero in their school or community. In written narratives, they focus on a challenge they might overcome, the benefits for others, and their personal attributes of a hero or heroine.

The focus turns to the students’ future. They identify a future goal and create a quest cycle to help them understand the struggles, helpers, and benefits that may arise in their future. One of our students whose goal was to become a professional athlete, identified social media as one of the struggles he would face on his quest. He explained that many athletes post things that get them into trouble, and he wanted to avoid that. He saw coaches as helpers and, with some guidance, expanded the list to include teachers. This caused a shift in students’ minds as teachers moved from being authority figures to being helpers who prepare them for life’s challenges.

Hero stories challenge and empower adolescents’ transition from childhood to adulthood. Through hero stories, students learn about sacrificing to a greater cause, venturing into the unknown, and dealing with hardships. Using heroes as a part of character development is a logical step, as long as heroes are examined and their merits are discussed. Rather than students having a list of heroes’ names, they add in-depth analysis of personal characteristics for each one. This analysis can help students foster the positive skills necessary for character development and the perseverance to carry on through any challenge life throws at them.

This We Believe states that educators should value young adolescents; make curriculum challenging, exploratory, integrative, and relevant; and ensure every student’s academic and personal development is guided. We believe teaching with heroes from Greek mythology accomplishes all of these things.