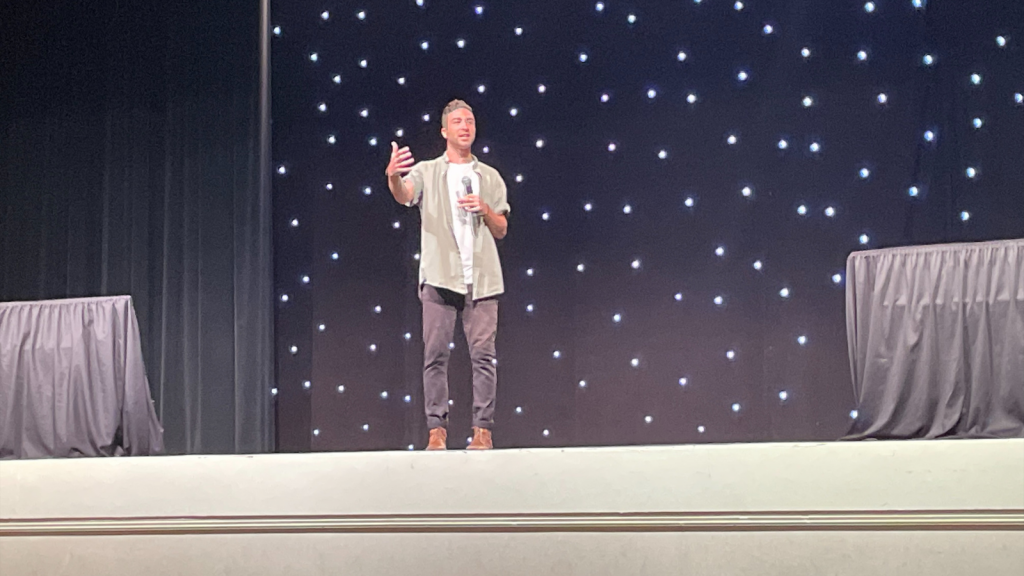 Houston Kraft, author and co-founder of CharacterStrong, took the main stage at #AMLE22 yesterday for his keynote address on Deep Kindness. From the outset, he made clear that he had a mission for those in attendance. “If we want more kindness on our campus, then we need to teach the competencies that underly that behavior,” he told those gathered. What followed was a participatory and rejuvenating experience for educators. We’ve shared some highlights below so that all AMLE members can engage in the work of kindness in their own school communities.

The tough and the tender

Houston explains that when he says kindness is harder than it looks, what he’s really talking about is looking at behavior as a byproduct, rather than a root cause.  “Behavior is a byproduct of internal skills,” he explains, “If we hope for more kindness, empathy, connection, and compassion on our campuses – behaviors we know are foundational to learning – then we need to teach the skills that underly that behavior.”

This work can be made even more challenging when division exists within the school community – which we’ve sadly seen an increase of in districts around the country over the past few years. There’s a place for kindness here, too, says Houston – but in equal amounts tough and tender. If we’re going to be leaders of kids and school communities, “We have an obligation more than ever to listen to people and to make them feel heard,” he contends, “Not everyone is going to respond to X with Y, and we need to understand that our perspective is not the only perspective.”

At the same time, educators have an equally important obligation, based on years of experience and training, to stand up for what they know is best for kids. He considers examples of when educators have done what he calls acquiescing to the invisible army. “Just because one or two community members feel passionate, we don’t have to fall to the whim of every opinion,” Houston says, “It’s our job to listen and validate but also to push in and demonstrate courage to advocate for our students’ best interests.”

What makes the middle grades special

Houston went on to emphasize that there’s no more important time for that advocacy than during the middle grades where we see the shift from foundation-building to guidance-giving. “Middle school is the first opportunity where people provide a direction for kids that they might actually walk in,” he explains, “We have to have expertise in our subject matter, but middle school is where, developmentally, we are most fearful of belonging and most in need of empathy. And where we have the highest probability of someone giving us tools or perspectives that will dictate the road we will end up on.” He recalls this from his own journey as a young adolescent, which has been reinforced by the thousands of interactions he’s had with middle schoolers in his work, “There are so many opportunities to demonstrate kindness and put students on a path of compassion. If we can first make them feel like they belong, we can give them the tools to do that for others.”

What is the plate?

OK, you may be thinking, this is all good – but who has the time between state testing, parent emails, district mandates, etc.? That misses the point, argues Houston, who has seen his share of educators experiencing program fatigue. A mantra at CharacterStrong is that this work is not about adding one more thing to the plate, it is the plate. “What are we stacking things on top of right now?” he asks, “We’re trying to put things on top of plates that aren’t ready to hold it. If we try to blame kids for a poor foundation, we’re going to fight an unending uphill battle.” He argues that learning loss will only continue to deepen, “until we recognize, teach to, and support the mental health of young people.” Otherwise, we’re just working on an unstable foundation.

This means rewriting both the rules and the narrative, at times. “I think we have a strong desire to apply old rules that we worked really hard on to new realities even if they’re incongruent,” said Houston, emphasizing that it’s not just about meeting students where they’re at, but also, “meeting the world where it’s at.” It’s time to collectively acknowledge the trauma we’ve walked through and understand that the rules and norms are being rebuilt.

As the keynote drew to a close, Houston reiterated his hope that we recenter kindness in our schools, “If we know connection and belonging is a human need, we have to build systems and skills that support the acquisition of and development of connection before students ever feel safe to learn.” The #AMLE22 conference was just one example of how we can start that work, as educators who share a common passion came together in community, developing relationships live and in person. After all, he says, “That’s one of the best gifts schools can offer: connection.”