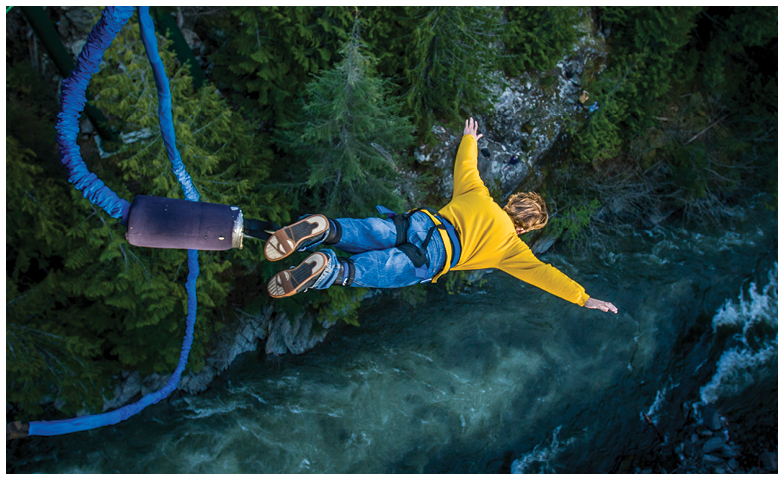 To get from Reno to Lake Tahoe School in Incline Village, Nevada, a school official had to drive me up 6,500 feet of steep, narrow roads lined with snow banks. The air thinned as we ascended above the clouds, so she handed me two Advil as soon as we arrived. I needed to be able to present throughout the day and couldn’t afford to get a migraine.

“Altitude sickness—that’s a new one,” I told Bob Graves, the head of school, as we chatted that morning in his office. “I’m used to worrying about the talking part. Until recently, public speaking terrified me.” If Bob was alarmed, he hid it well. “Really? What changed for you?” he asked.

The short answer was that I was tired of getting in my own way, and I felt inauthentic prodding students to stretch while I played it safe. I had interviewed dozens of experts on risk-taking over the years and decided it was time to apply their advice to myself.

We’re all works in progress, and the start of a new decade is a good time to relinquish a few fears and chase long-shelved goals. As educators, we can spend so much time helping students realize their potential that we neglect our own growth. That’s a mistake. If we want students to lean into discomfort, we have to take risks, too.

No matter where you are or what you hope to accomplish, here are four strategies that can help you summon the courage to fail.

At my last school, I had to present to a small group of parents in the school library. You would have thought I had to give a TED talk to thousands. I couldn’t sleep for days before the event and was thoroughly depleted by the time it was over. I never wanted to feel that way again. I knew that small exposures extinguish phobias, so I resolved to accept every speaking invitation that came my way.

Fast forward a few years. I was about to deliver my first keynote address but got cold feet when I realized 600 educators would be in the audience. I retreated to the booth above the auditorium to pull myself together. After I took a few deep breaths, I texted Jessica Lahey, author of The Gift of Failure. She not only is one of the few people I know who presents all the time, she’s the type of person who will stop whatever she’s doing to help a friend. I prayed that she could get me back in working order.

“I can’t do this,” I told her. “I feel sick. There are too many people here, and they’re all going to be staring at me.” She kindly but firmly told me that no one cared about me. At all. “They want to know if you can help them help kids,” she said. “That’s it.” She then suggested I play “You Will Be Found,” from the musical DEAR EVAN HANSEN. I listened to the lyrics, which describe a teen boy in emotional pain who desperately wants to be seen. Once I took myself out of the equation, I was good to go.

Start with the end goal.

Everyone defines risk differently. You might think it’s no big deal to apply for a promotion, but shy away from social risks. An educator might not apply for a team leader position because they don’t want to step on the toes of a friend who wants the position. Or a teacher might hesitate to express a contrary view at a faculty meeting because they worry they’ll alienate or offend someone.

Many years ago, I initiated the screening process for a vulnerable student who needed academic interventions. A couple members of the special education team told me in advance that they opposed giving the child an IEP, so the tension was thick even before the first meeting. I anticipated a battle and did my homework but was stunned when the team cast protocol aside and hastily voted against services.

I never questioned whether I should report the infraction, but that meant calling out a couple of my own colleagues. I was scared that I’d permanently damage already-strained relationships. To deal with my fear, I shifted my focus to the end goal. I reminded myself that the student’s right to a fair process mattered far more than my discomfort. I shared my concerns with the principal, who determined that the child’s rights had been violated and instructed us to start over.

Risk-taking is like building muscle—it’s a slow, incremental process. To boost your confidence, take starter risks. If you don’t feel ready to present at a national conference, consider a local conference. If that’s too big a risk, try asking a question at the end of someone else’s presentation. If you aspire to write a book, start by submitting an article or contributing to a blog. If you’re not ready to share your ideas publicly, keep a journal, take a writing seminar, or post comments in a closed Facebook group.

The categories of risk don’t have to match. For example, if you want to change jobs but resist change, practice flexibility by trying a different gym or running route. Or join a recreational basketball team with players you don’t know.

Perhaps someone told you that you’re the wrong person to lead a new initiative, or run a staff meeting, or present at a conference. Or maybe you applied for a job and were told you don’t have what it takes to be successful. Instead of letting others define your limits, leverage the underdog effect. A recent study found that people who believe that others do not expect them to do well are more likely to receive higher performance evaluations from their supervisors. They work extra hard to prove others wrong. If there’s no setback, there can be no comeback.

It took me a long time to submit my first article to The Washington Post. I not only questioned whether my ideas were worth sharing, I worried that others would judge me for thinking I had ideas worth sharing. And then my first piece ran, and my worst fears came to life. A colleague called me a self-promoter and told me I had no business writing anything. I already was plagued by self-doubt, and the criticism nearly derailed me. But it also was a gift in disguise. No way was I going to stop writing and validate that person’s off-base assumptions about me. Frustration kept me moving forward.

Use negativity to your advantage. In fact, take special note of whatever trait most irritates your critics. If you amplify it, you might discover it’s your secret superpower. Stubbornness can morph into determination. Intensity can generate laser focus. Distractibility can lead to sudden bursts of insight.

It’s not easy to take risks. All sorts of things can get in the way. But when we lean into discomfort and act with intentionality, we get to narrate our own story. And isn’t that what we want to be modeling for our students?