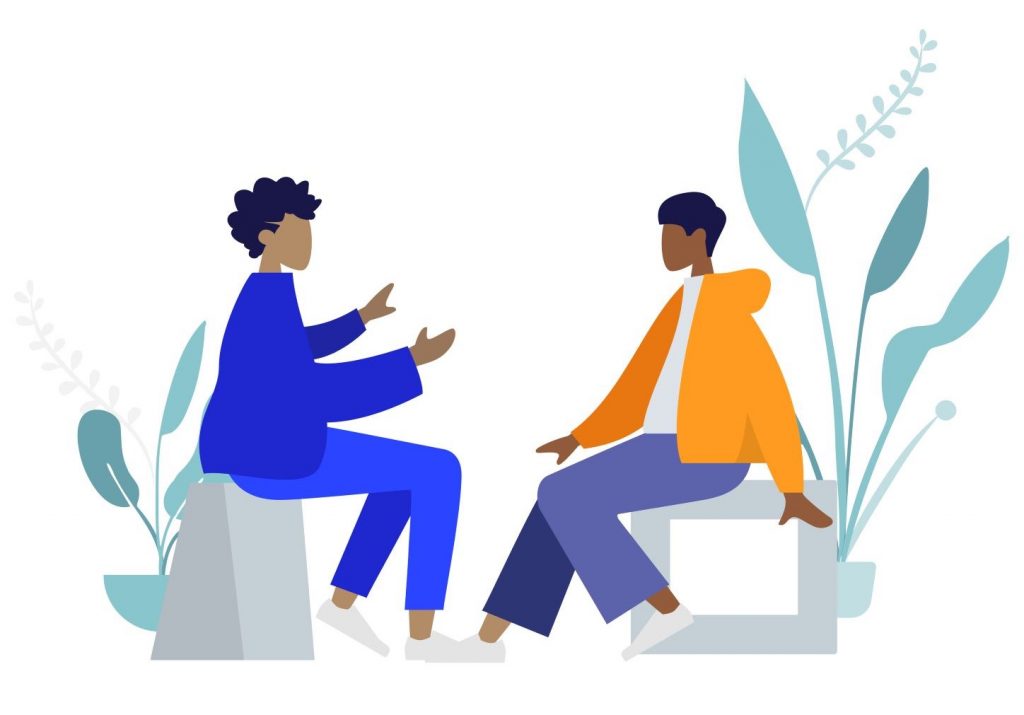 The following is an excerpt from AMLE’s newest publication, Help Us Begin: HUB mindsets and strategies for meaningful conversations with kids, especially when you are challenged by the topic. Order your copy to gain access to all of the strategies included in the book, or learn more about HUBs during our upcoming webinar with author Jen Cort.

Metaphorically speaking, challenging topics have heft. Without the capacity to hold the conversation, it is akin to putting heavy items in a wet paper bag. To help, I have compiled a collection of HUBs, or Help Us Begin, strategies and tools to build strong relationships and lines of communication with kids. And because our kids do better when their adults at home and school have shared language and approaches, HUBs are useful for both parents (caregivers) and teachers to use simultaneously to have parallel or intersecting conversations.

Below I have shared one of these HUBs called Use One Sentence. Use One Sentence empowers you to navigate challenging situations using fewer, more impactful words. I hope you find it useful with your students.

We have all done it before. When we are stressed or anxious, we can tend toward extremes. In those moments we may verbally either go on and on filling the space with words or, alternatively, use fewer words than necessary for healthy communication.

Dan knew he had to have a difficult conversation with his son, Josh, after hearing about Josh’s disruptive behavior in school. Dan was nervous and felt underprepared for the discussion, leading to his words tumbling out like a dam flooding over.

Josh sat still, nodding at times but also counting the ceiling tiles. Later describing that he simply had to check out because his dad kept on talking.  The next day Dan shared with friends that he and Josh had a serious discussion, and Josh now understood how to act.  Josh did not share this view as he was annoyed that his dad talked so long, he missed a level on his video game. Dan indeed stated his concerns, but they did not hold the same meaning for Josh because the overwhelming number of words drowned out the actual message.

Angela and her mom have the opposite dynamic, handling challenging topics with silence. Angela’s mom received an email from the school about a sexist comment made to Angela and she wanted think time before talking with her daughter. Angela knew the teacher had called and suspected the conversation was coming but didn’t know when or where. Her mom’s silence was longer than usual, making hours feel like days, leading Angela to conclude her mom was angry with her. The anxiety and anticipation made it difficult for Angela to study for her test, compounding an already difficult situation with increased (and unnecessary) academic pressure.

We can avoid word vomit or loud silence by giving ourselves a structure to work within such as the One-Sentence Response. One-sentence response prompts us to make the sentence nutrient dense, packed with meaning in the message. One sentence also calls us to pause and listen before speaking again. Note, the one sentence is not a run on and works when it is a legitimate sentence with a start, middle, end. We then speak with one sentence at a time, allowing space for response. Having heard the other person, we offer another sentence, continuing until the conversation concludes.

Dan:   Josh, can we talk either before or after dinner about your perspective on what happened in school today? (Co-scheduling, allowing Josh choice, previewing the topic for Josh.)

Josh: I guess before dinner.

Dan:   Thank you. And where would you like to meet?

Before dinner, in Josh’s room:

Dan:   I brought a glass of water and a snack. I want to hear how you experienced the day, particularly English class. (Open-ended invitation to share while guiding Josh to English class.)

Josh:  He wouldn’t call on me, so I told my friends what I wanted to say.

Dan:   Can you tell me what you wanted to share in class?

Josh:  Tells his dad what he wanted the teacher to hear.

Dan:   Thank you for sharing that. I wish he had heard your thoughts, too. Could we work together on some strategies to avoid a repeat of this situation?

Dan and Josh’s next step would be to create a menu of strategies. The menu might offer options such as moving seats toward the front of the room, writing down what he wanted to share, or talking to the teacher. Menus have realistic boundaries and avoid unfeasible ideas, such as “firing the teacher.” Josh reviewed the menu and decided which strategy to try first. Dan, sensing they are at the end, scheduled a follow-up meeting.

This strategy is not just for parents, and can be just as effective when used by educators. Here’s an example:

English teacher, Alice, reviews the chapter of the book assigned over the weekend. A student comments to a classmate in a voice loud enough to be heard by Alice and most of the class with a pivot topic asking why the class was discussing Shakespeare instead of the graffiti appearing on the temple over the weekend.

Alice: Elli, I hear you and we need to discuss it, let’s finish this one piece, and then we can discuss.

Alice:  I don’t know that I can help either and I want to hear your thoughts as soon as we review the scene.

In the above example, Alice needed a minute to collect her thoughts and used one sentence at a time.  Alice acknowledged Elli’s feelings, and drew boundaries around the timing, thus giving herself a few minutes to think.

Jen Cort worked as a counselor, principal, and senior administrator for 25 years before moving to consulting for schools on equity, diversity, inclusion, and justice. Jen is the host of a podcast called Third Space with Jen Cort.
jencortedcon@gmail.com
www.jencort.com