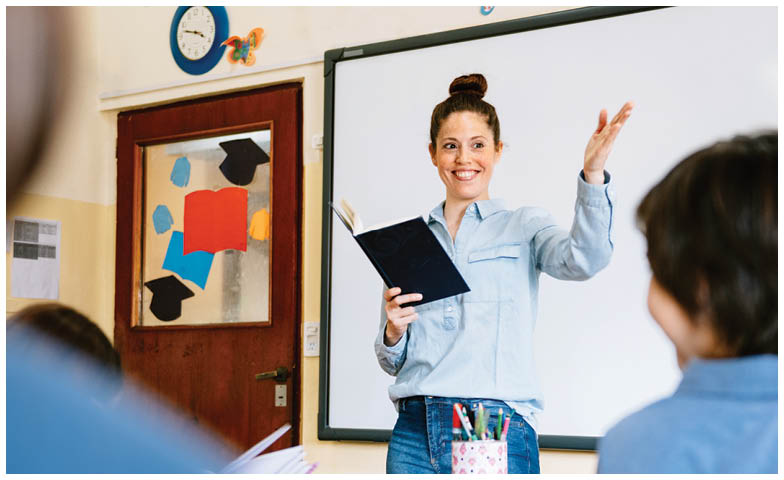 Reading out loud offers chances for connection and conversation

Good stories are powerful. They have a way of seeping into our souls and lingering in the backs of our minds. For years, stories were the main way that knowledge was passed between generations. Reading to my sixth grade students or my own kids (ages 11 and 13) is one of my favorite parts of the day. There’s something about sharing a story together that bonds us and makes us closer.

We see the benefits and get joy from reading to kids when they’re little, but those times seem to end once a child is able to read independently. Once kids reach the age where they can read on their own, that tends to become their sole way of reading. I believe, though, that it’s important to continue to read aloud to kids even when they’re preteens and teenagers because it’s a way to keep a connection with them. A read aloud is often at a level slightly higher than what a child would choose on their own, and it’s beneficial for an adult to help a child process the emotions and ideas that come with a quality book. When children read independently they’re obviously still learning and hopefully enjoying their books, but they’re missing out on the special parts of a read aloud: the connection and discussion.

There is so much happening in the world now with the pandemic, Black Lives Matter, and subsequent concerns about mental health. Young people might not be talking about such stressful events, but they are still trying to process them, and a book can be an incredibly powerful way to help them do that. Middle grades students are at a particularly important stage in their lives since they are still developing their values and understanding of our world, but they also can comprehend so much more than they could a year or two earlier. This stage of development is also a time when we see kids open up more to friends than to their parents, so a read aloud can be a great way to keep a conversation open. Stereotypical complaints about this age group are that they’re closed off emotionally, they won’t talk about their feelings, and they’re insensitive to others because they’re too caught up in their own world. And, of course, there’s the worry about how much time they spend on social media and what that might do to their developing psyches. That’s why I love a good book; it allows us to have a shared experience we can talk about.

As a sixth grade English language arts teacher, I read aloud to my students every day. It’s obviously a great way to model fluent reading and to explore quality writing, but it’s also my favorite way to connect with my students. Reading a book is like having a superpower; when else can you time travel, explore a new era and place, meet fantastical creatures, or see life through the eyes of someone of a different race, ethnicity, gender, or belief system? We use our read alouds to travel to other countries to learn how the people’s lifestyle and culture is similar to or different from ours. We use them to gain a perspective on a situation we might not have understood when viewing it only through our own lens. We use read alouds to develop empathy, and we learn how we might become better people because of it. It might seem like a stretch that you could get all of those benefits from a book, but it’s the truth.

During read aloud to my sixth graders, I’ve had a huge group of students spontaneously break out in applause when a character stood up to a bully to defend a classmate. I’ve had students ask how they can become activists or get more heavily involved in helping out after hearing about inequity, and I’ve even had kids get choked up from hearing about relationships that are hard. We have powerful discussions about why people act the way they do, how they’re feeling, or how they could make a change to improve their relationships. We learn from the stories and then we share that knowledge with friends and family.

We also refer to those stories throughout the year as learning tools in our own lives. I can look back to how a character handled a situation and see if the student might try it. After reading The Wednesday Wars, for example, I might say to a student privately, “Remember how when Holling stopped making assumptions about people, he started making friends? Maybe it would help if you told your friend how you’re feeling instead of assuming that they know. Could you try that?” When we read Joey Pigza Swallowed a Key, we had meaningful discussions about what it’s like to have ADHD (something many students could relate to), and we could better see the importance of being patient and understanding. When we read I am Malala (a memoir by Malala Yousafzai, a young Pakistani woman who fights for all girls to be educated) and A Long Walk to Water (a hybrid nonfiction/fiction story that follows a young Sudanese boy who goes through a harrowing fight for asylum and grows up to create wells for people who do not have access to clean water), we realized how similar we are to people who come from such different cultures and we learned the importance of standing up for people and being kind. And from One for the Murphys (in which the main character is a foster child who has to learn how to trust love), we saw the power of giving people the benefit of the doubt because everyone has a story, and if we are strong enough to stick around to learn those stories, people can surprise us in the most wonderful ways. The teacher in that book purposefully paired his students with someone he did not think they got along with or knew well to force them into figuring out how to work together. At first this plan seemed disastrous, but eventually the characters came around and formed friendships where they least expected it. Since I change my students’ desks every month to encourage bonding with people students wouldn’t necessarily choose on their own, this book helped to reinforce that message. When we had class discussions about this scene, it was a nice segue into how working through differences in relationships is a vital life skill.

I also read aloud to my own kids. Usually I read a book to both of them at the same time, but sometimes I have a separate read aloud for my daughter and my son, depending on their interests. I like varying the pattern because it’s nice to have that special time for the three of us and the discussions are better when we have all of our perspectives on the book, but it’s also rewarding to have time alone with each of them. When kids might be feeling shy about opening up to parents about what’s happening in their lives, a book can provide a safe topic; after all, we are just talking about a character’s problem and how they’re working on it, not their own problem!

When the protests about Black Lives Matter started happening, books were one of the main ways to start conversations with my children. Racism is hard and uncomfortable to talk about, and I found that books gave me a pathway to do that. (See figure 1 for a list of suggested titles for read alouds on the topics of racism and social equity.)

I like to change up what we’re reading often, so if I look back at the last few read alouds I’ve done with my kids, I can see that each gave us an opportunity to grow our hearts, minds, and imaginations. We read A Time Traveler’s Theory of Relativity and saw how powerful it is to grieve someone’s death—especially when you feel like you caused it. This was a fantasy book, but its message was reinforced in our latest realistic fiction read aloud, Sunny (the third book in the Track Series), this time told from an African American point of view. We also read Al Capone Does My Shirts, which showed us how important it is to listen to people with Autism Spectrum Disorder and to trust their way of thinking.

As a teacher, I am always looking for ways to improve my library. I want books that are interesting and engaging for my students and I want them to explore the world and humanity through them even if they are at home on their own. I once watched a TED Talk on the dangers of “the single story,” which emphasized the importance of listening to as many different stories as you can so you’re not basing your views of people and cultures and beliefs on a single experience that the people being described might have gone through. It made me realize that in a lot of ways, I needed to broaden my library so I wasn’t including just several versions of the same experience and was instead trying to include as many viewpoints and approaches as I could find.

For example, I noticed that I had lots of stories that included Black characters, but almost all of them were related to the Civil Rights’ Movement, and it made me realize that I was limiting the Black voice to that one time period. Since then, I have added lots of books by Black authors or with Black characters that are set in different time periods and are in different genres. I try to do this at home, too, when I read to my own kids; I try to change up the genre, time period, style, and topic of the read aloud so we’re seeing as much as we can. I want us to read books with our minds alert and our hearts open.

In closing, I challenge you to try this: find a book you think might engage your child or students (if you’re not sure where to look, ask teachers or librarians!) and read it to them. I hope you discover a special time of bonding, talking, sharing, and learning from each other.