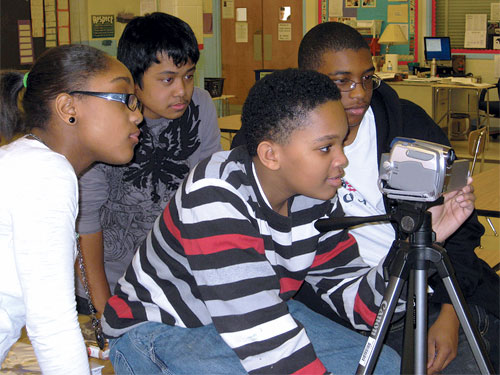 As middle school teachers, we strive to inspire our students to achieve. We constantly seek ways to engage, motivate, and challenge every learner in our classrooms. We want to provide those special experiences that transform disengaged students into involved students. We yearn to see bright students who, after failing year after year, finally succeed in our very classrooms. We love to hear a student say, “Your class gives me the motivation to get up and come here every day.”

These are the reasons we are teachers.

During my many years in regular, special education, and gifted classrooms, I grappled with the question of why so many of my co-workers were not having these experiences; instead, they were becoming discouraged with their teaching careers. How fortunate then, that seven years ago, while acting as an instructional specialist for visual literacy for Maryland’s Montgomery County Public Schools (MCPS), I had an opportunity to implement my educational theories into a new middle school program. The results exceeded even my own expectations.

In 2007, MCPS launched a middle school reform initiative that included rolling out new courses and new organizational structures to MCPS’s 38 middle schools during a four-year period. Summer 2007 was the Phase I launching of the initiative at 5 middle schools. I was asked to create one of the new courses: Lights, Camera, Literacy! (LCL!), a 20-day, 72-hour summer course that would teach literacy skills. My colleague Kathryn Lee joined me to develop this curriculum, which had lofty goals:

Language of the Moving Image

While on a Fulbright Scholarship to the United Kingdom in 2006, I witnessed the language of the moving image (LMI) curriculum in action. Upon my return to the United States, I discovered that the National Council of Teachers of English (NCTE) had issued a statement two years earlier regarding teaching literacy skills with non-print media.

Being a screenwriter as well as an educator, I knew the power of story, especially when a story is shared on the big screen. I was aware of the filmmaker’s use of language to convey ideas. I had witnessed the moving image’s power to engage its audiences.

My pedagogical theory began to form. By infusing literacy instruction with LMI, might we capture the attention of disengaged learners? By exposing students to literacy concepts via film clips, might they transfer this new knowledge to their own productions and then solidify their knowledge with written text applications? What if, through carefully designed and methodically sequenced activities, students could learn to “read” and “write” LMI in school, just as they learn to read and write spoken language?

I have always believed that authentic learning for an authentic purpose provides the most meaningful learning experience, especially when students feel excitement about the end goal. Many literacy topics such as vocabulary, story structure, metaphors, main idea, summarizing, and inferring are taught in isolation.
To teach these topics in an authentic way where students would need to fully understand them in order to complete their own projects—wouldn’t this ensure students’ openness to learning these skills?

Student engagement is necessary for student learning. The activities designed for the Lights, Camera, Literacy! course would not only have to ensure the engagement of visual and auditory learners, but kinesthetic learners, as well. The course would have to address variation in students’ attention spans. Multiple intelligences, especially those intelligences not normally called upon in a traditional classroom, would not only need to be acknowledged, but would have to be integrated into the program.

If our students could feel success with every task, we knew they would be hungry for more tasks. If the bar could be set to allow every student to be successful, we expected that the students themselves would then strive to set that bar even higher.

Collaboration is crucial with project-based activities, yet due to the inevitable conflict within working teams, many teachers avoid classroom projects. Our LCL! students, we decided, would be forced to collaborate by being assigned to random four-person teams. Just as in the professional world of filmmaking, the teams would have to find a way to be effective. Instead of avoiding the conflict in group work, we would use these moments as teaching opportunities.

Since most adolescents have not yet been given the tools for effective collaboration, we would need to include a concrete instructional teaching aid so students could practice and even excel at this important life skill. Students would work collaboratively and use technology to produce short films.

The Maryland State Department of Education and our new course sought the same end result: to ensure that students acquire literacy skills. The biggest challenge, we believed, would be assessing the teachers of the Lights, Camera, Literacy! classes.

Supervisors would need to understand that when they observed the new program in action, they would not be seeing one specific skill being taught in one class period; rather, they would see project-based activities where students acquire multiple skills via authentic use of the skills over many class periods. (Note: The Common Core, which has replaced our state’s outcomes, validates the authentic project-based, collaborative approach of the LCL! program.) 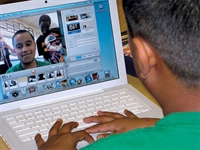 Critical and creative thinking and technology use would be inherent to the Lights, Camera, Literacy! program. Camcorders and computer applications would be the necessary tools for accomplishing the team’s creative tasks. Students would learn LMI by critically viewing film clips for particular purposes. They would demonstrate an understanding of these purposes by including examples in their own short films. Their tasks would be designed in such a way that students would be consistently rebuilding and expanding their productions in order to demonstrate their accomplishments as visual communicators.

Film to Text to Film

As Kathryn Lee and I were tackling how to incorporate the six goals into the Lights, Camera, Literacy! course, we knew early-on that the selection of the teaching films would be crucial. The anchor texts we chose were Akeelah and the Bee and Searching for Bobby Fischer.

With Akeelah and the Bee, we would have a main character to whom students can relate and a theme that stresses not only believing in yourself, but that through hard work and dedication, you can discover what you are capable of accomplishing. We also could expose our students to the worlds of spelling bee competitions, lexicography, and etymology. With Searching for Bobby Fischer, we would have a true-life main character’s story that’s revealed through more challenging LMI, and we could introduce students to the world
of chess.

Leveraging students’ heightened interest in spelling bees and chess through these films, we could incorporate subject-related informational texts and involve students in hands-on activities. We also could use the movies’ scripts as bridges to denser written text.

With the films chosen, the materials ordered, and the course manuals printed, we presented a two-day training for the classroom teachers. One month later, the first Lights, Camera, Literacy! classes were launched with 200 students enrolled. Within days, there was a buzz. Students in the LCL! classes were so engaged and so successful in their tasks that word about the course started to spread.

Within two weeks, we had requests from principals at two other schools to try LCL! as an elective course during the school year. Because the 72 hours of the LCL! summer program easily translated into a one-semester course, the requests to try this pilot program were granted. Within weeks, the schools requested a second semester and LCL! Part Two was born.

Currently, these three LCL! strand courses are being taught to thousands of MCPS students at four times the original number of schools.

As an educator, I’m thrilled to witness the expansion of LCL! and to see pedagogical theories in action that result in positive change. It’s especially rewarding to hear the excitement of the teachers after a day in their LCL! classrooms. They tell me that they have seen LCL! transform disengaged students into involved students. They tell me they have witnessed bright students who, after failing year after year, finally succeed in their classrooms.

One LCL! teacher even heard a student say the very words, “Your class gives me the drive to get up and come here every day.”

This article was published in AMLE Magazine, May 2014.