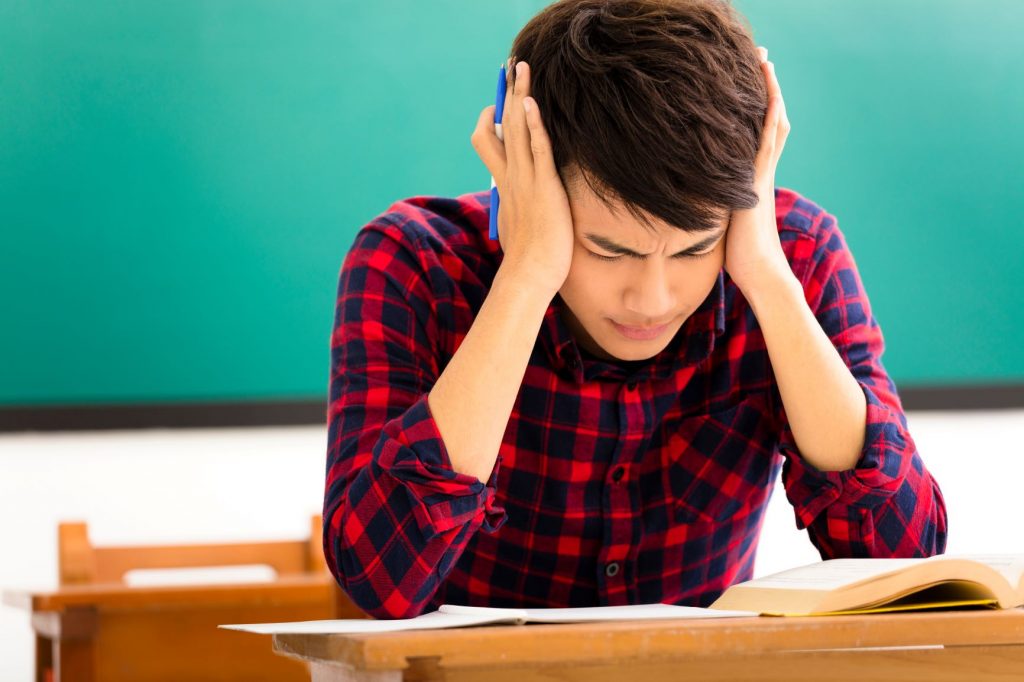 In the winter of seventh grade, my math teacher handed me a graded test that had a big “45%” at the top circled in red. “Your counselor is expecting you,” she said to me in a low voice. “You need to go right now. Take your stuff.”

My stomach twisted into knots as I made my way to the main office. When the counselor saw me at her door, she told me to take a seat. “Do you know why you’re here?” she asked. I shook my head, and she looked at me kindly before breaking the news. “I’m moving you to the lower math class,” she said as she nudged a box of tissues toward me. She expected tears, but I was too relieved to cry. No one had died, and I wouldn’t spend another minute in a class that made me feel like a failure. Still, my math mojo was gone, and I worried I’d bomb the easier course, too.

The new class was different, though. The teacher insisted we hand in our scratch paper so he could “see our thinking.” He never once handed back a test that only had a score at the top. If anyone answered a question incorrectly, he’d point out a step or two they got right. Our scratch paper was always returned with encouraging comments. And when he met with my parents a few months later to discuss my progress, he didn’t bring up my grades at all. Instead, he talked about my thinking. “Phyllis has a unique way of approaching problems,” he told them. “She gets to the right answer eventually, but in her own, outside-the-box way.” He could have said I needed to pay closer attention in class, or that I should read instructions more carefully, both of which were true. Instead, he chose to focus on my creativity. I still remember the pride I felt when my parents relayed his feedback. Before then, I considered myself “bad at math.” After that day, I was an outside-the-box thinker!

I’ve thought a lot about that teacher as I contemplate what it must be like for students returning to school buildings after a year of disruption. More than ever, they’re going to need teachers who are adept at the artful reframe. So many middle schoolers have lost their academic mojo during the pandemic, whether sky-high stress levels messed with their focus and follow-through, or they lacked access to technology, or they struggled to adjust to shifting schedules and instructional methods. And if a kid’s grades plummet in the insecure tween years, during a time when they’ve spent months feeling disconnected from both teachers and peers, their academic self-concept and motivation are bound to take a hit.

The good news is that tweens will engage in learning if they think their teachers consider them capable and want them to succeed. Recently, a sixth-grade girl shared in an affinity group that she does her best work for one teacher who is particularly flexible about due dates. “I haven’t missed a single one yet,” she said, “because I know he trusts me, so I want to work harder for him.” This isn’t unique to middle schoolers. Christina Samsock — a senior in high school and my counseling intern — told that sixth grader that she feels the same way. A couple of Christina’s teachers gave her “extension passes” this year that buy her an extra 24-hours to complete an assignment, no questions asked. She can just staple a pass to the late assignment when she hands it in. The passes lower her stress and, as a result, may help her work more efficiently, as she’s never had to use one.

The same is true when it comes to behavioral expectations. As kids return, they may be more wiggly, more likely to flop over their desk or lie on the floor, but understand that they’re simply trying to stay grounded. “Students are coming in with compromised abilities for regulation and attention because they’ve gone through toxic stress,” explained Mona Delahooke, the author of Beyond Behaviors: Using Brain Science and Compassion to Understand and Solve Children’s Behavioral Challenges. “It’s important to look beyond behaviors to compassion, to have a new tolerance for movement,” she added. “We need to help every student meet their need for movement and praise them for it.”

If a child comes back with a lower tolerance for frustration, they also may call out or scream. “If that happened, I’d ask them what the purpose is,” said Morgan Penn, a science teacher at Argyle Middle School in Silver Spring, Maryland. “I’d say, ‘If you’re frustrated, let’s talk about other ways to handle frustration. It’s okay to yell, but this isn’t the space.’” She noted that students won’t learn if they feel anxious or think their teacher isn’t rooting for them. “A student said to me, ‘This is the only class I have an A in.’ When I asked him why, he said he knows that I like him and will deal with it if he’s struggling.”

Even without the strain of a pandemic on a middle schooler’s nervous system, they’re operating with an undeveloped prefrontal cortex, heightened sensitivity and impulsivity, and increased moodiness. As Delahooke pointed out, “Teachers and administrators are going to have to ride the waves of this maturing executive function, be realistic in their expectations, and try to understand and empathize.” The good news is that anything educators do to convey care will improve a child’s self-concept, engagement, behavior and performance.

Relationship-building not only helps in the short term, but also is likely to have a lasting impact. Middle schoolers will never forget the teachers, counselors and administrators who helped them when they were at their lowest. After all, it’s been three decades since I took that seventh-grade math class, and yet I still remember the teacher who combed through my scratch paper so he could focus on my strengths instead of my scores.