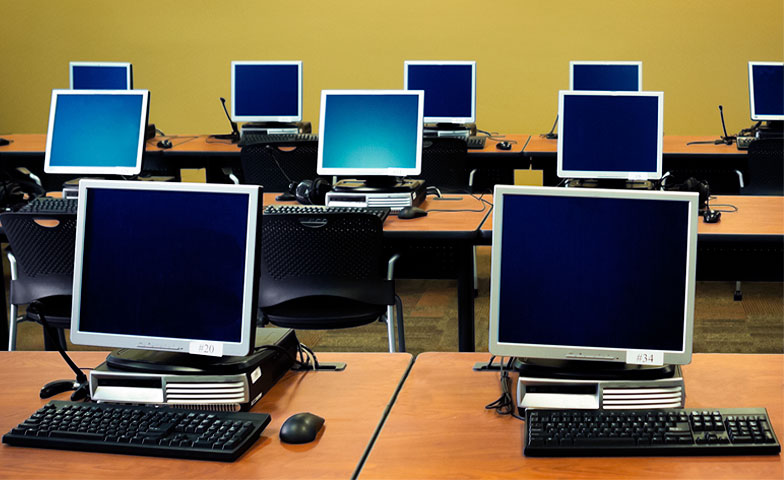 “I didn’t do very well in the library, I was distracted,” one of my sixth grade students told me a few days after completing a math progress monitoring test in the school library. An uncomfortable testing environment can lead to distracted test taking, anxiety, and unreliable test scores.

Progress monitoring tests are an important tool for education personnel to assess academic achievement of all students. Teachers and schools utilize these test scores to improve instructional practices, to accommodate instruction for students’ needs, to measure academic growth, and to determine if adequate yearly progress is being met. Since these tests are used to improve instruction and academic growth, it would make sense for students to take these tests in a comfortable environment. The answer may seem simple, but there is more to it than just a comfortable environment.

Our school utilizes a computer-based test that students have access to anytime and anywhere if there is an Internet connection. The school district requires three testing periods where all students must take the test to help measure individual student growth in reading and math. The first test is taken in the fall at the beginning of the year, one in the winter after the holiday break, and finally in the spring before the end of the year. Scores and instructional recommendations are received instantly as students finish their test. Since students are able to take the test anytime throughout the year, I decided to have students take the test after completing the expressions and equations unit. I was shocked to see a majority of my students regress.

As a first year teacher, this broke my heart and almost sent me running out the door. I was wondering what I did wrong, and how I could fix it. During a monthly Math Professional Learning Community meeting, the other math teachers and I analyzed the test scores across the grade levels and found that numerous students regressed in their scores. Many of which were students who typically would not regress. This led us to many questions: Are students effectively learning the math concepts? Are students anxious to take this test? Are students taking this test seriously, or just trying to finish? Are students taking this test in an effective testing environment?

Traditionally, high stakes tests are taken in school computer labs, cafeterias, gymnasiums, or other large areas where multiple students could test in the same quiet area. This is an efficient way to test multiple students at a time, and reduce the number of testing days, but is it the most effective? I decided to do some investigating to find an answer.

The Concern
It’s a cool Friday morning in March. Students are flocking through the school hallways as the morning bell rings. Slowly, students show up in my classroom and notice the desks are rearranged in an odd, but familiar fashion. They look over at the daily agenda board and instantly complain. “Testing, today, on a Friday?” And just like that, the motivation for the day is ruined and students’ anxiety sets in.

As math class starts, I prompt students to find a desk. Some of the desks face the walls and the rest are spread out around the middle of the classroom. They were organized this way so I can walk around and monitor students during the test. This desk arrangement would be considered typical progress-monitoring testing conditions in my classroom. Once all students were organized and instructions were given, they opened up their personal computers, logged into the test website, and started the test. I used this score as a baseline, focusing specifically on the percentile rank out of 100. Once I had the baseline scores, I was ready to manipulate the testing environment.

The Change
I wanted to see how my students would react and how test scores would differ in different testing environments. For the second progress-monitoring test, students took the test in the school library. From a teacher standpoint, it was such a hassle to get and keep students’ attention when we were in the library. They were so used to the routine of finding their desk, opening up their personal computers, logging in, and completing the test.

When we got to the library students couldn’t decide where to sit, who to sit by, and were distracted by what was going on around them in the library. I watched two students in particular: one student who has a difficult time focusing, and the other who has had many negative behavior incidents during the year. The student who could barely focus was too distracted by the new environment and never completed the test, receiving a percentile rank of zero. The student with behavior issues raced through the test, receiving a percentile rank of seven, and then started to distract and disturb other students who were still testing. These scores did not show the progress they made throughout the year. Clearly, the library was not the most effective place for those two students to test.

The final testing environment was back in the classroom, but the desks were in a different arrangement. I had various seating arrangements for students to choose from. I had some groups of desks, some desks spread out around the classroom, and some flexible seating options including pillows, chairs, and even floor spots. I gave students the freedom to choose a smart spot, meaning a spot that they thought they could do their best in.

Again, I watched the same two students as in the library and observed their actions and behaviors in the flexible seating environment. The student who has a difficult time focusing found a spot on the floor in the corner of the classroom and moved some chairs around him, almost like a fort, to keep distractions from the classroom out. This student received a percentile rank of 35. The student with behavior issues chose a desk facing out the window. When he completed his test, with a percentile rank of 75, he closed his computer and watched everything happening outside the window. Both students achieved their highest percentile rank in this environment.

The Results
As anticipated, on average, students had higher percentile ranks when taking the test in the classroom they learn math in. However, I found that there is more to it than just the classroom environment. When students had the choice to find a comfortable spot within their math classroom, they achieved their best scores on the test.

By giving students the choice of seating, they felt more comfortable and less anxious to take the progress-monitoring test. Each student has a unique learning style and learning preference. Allowing them to choose their preferred testing environment will help them achieve what they are capable of.