Students carry a stack of textbooks into the classroom and sit in their rows of desks. Mr. Jones pulls up his PowerPoint and leads the class through the content that will be on Friday’s test. Next week will look pretty much the same.

Mr. Jones thinks he’ll take his students to the computer lab sometime soon so they can use the Internet. He might even try some cooperative learning activities once the summative assessments are completed. He is concerned that students aren’t motivated to turn in homework. Their off-task behaviors are causing some real discipline problems.

There must be a better way. 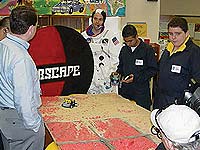 There is a better way, Mr. Jones. At G. W. Carver Academy, we design innovative, integrative curricula that immerse students in relevant problem solving. As a result, students choose to become self-motivated learners instead of sitting around asking questions like, “Why do we have to know this?” or “Is this going to be on a test?”
We design activities that draw from many sources and overlap subject areas so learning does not stop between class periods. We try to avoid pencil and paper tests in favor of culminating simulations that require students to demonstrate mastery of specific standards.

Every nine weeks, each team of teachers focuses on a particular Odyssey unit such as animals, connections, careers, or mysteries. During the eighth grade Space Odyssey, teams of students studied the U.S. Constitution so they could design their own constitution for a Martian colony. They studied space science and scale drawing so they could draw up blueprints for the colony. And, they wrote a science fiction story.

For several years, this seemed to be working just fine. But, a few years ago, during our annual summer curriculum writing session, the teachers did some honest reflecting on the success of the unit and decided these activities lacked integration between subjects and, for the most part, constituted fairly traditional schoolwork. We put students in groups, but they had no roles within those groups. The Martian colonies looked like shopping malls or amusement parks, because students didn’t know the dangers of living in space or limiting factors such as cost. The science fiction story had no connection to the colony and was full of non-realistic aliens.

We knew we needed to go for broke, so we began brainstorming. We had applied to become a NASA Explorer School and had conducted some video conferences with NASA educators. Why not tailor these distance-learning opportunities to fit our students’ need to learn about surviving in space or on Mars?

We contacted some of our partners in education such as engineers from L3 Communications, Baylor University international students, and folks from the Center for Astro-Physics, Space Physics, and Engineering Research. An overnight field trip to Johnson Space Center gave students an opportunity to conduct primary research about spacecraft, space suits, and astronaut training. Students studied microgravity and designed experiments—one of which was flown on NASA’s Weightless Wonder astronaut-training aircraft.

And, we wrote a lot of grants and asked for donations.

We wanted to create a Carver Academy Mars Simulator—and we did! We turned a science closet into a Mars rocket. Students helped paint instrument consoles, our technology specialist connected webcams, our art teacher had her students paint murals, our social studies teacher ordered flight controls, and our theater teacher set up speakers so the school would shake with the rumblings of the rocket engines.

We turned our computer lab into Mission Control. Students applied to be astronauts, were fitted with flight suits, and studied training manuals for their specialized positions. We placed students in a virtual environment that gave them a reason to want to explore space and learn what they needed to know to accomplish mission goals for themselves and for their teams.

On Blast-off Day, we invited a NASA liaison to watch and local television crews to film students going through lift-off procedures while the countdown was projected onto the screens in Mission Control. Students used the Internet to check the weather at Kennedy Space Center to make sure it stayed within lift-off safety parameters.

Suddenly, there was a crisis aboard the rocket. As strobe warning lights and alarms went off, the astronauts checked the ship’s barometric and temperature gauges so the student-engineers “Earth-side” could calculate corrective procedures. The Baylor international students pretended to be members of the International Space Station crew and recorded messages (with parts of the important information in their native languages) so Mission Control needed to use context clues to decipher the data.

Once the situation was under control, the astronauts conducted experiments in the ship’s vacuum dome, wrote in their logs, and continued navigating toward Mars.

Later, the astronauts experienced an Apollo XIII-like problem and had to communicate with Mission Control by fax or distance-delayed audio to build a CO2-scrubber using available equipment aboard the rocket before time ran out. 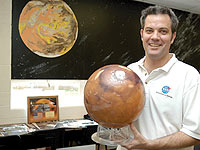 In another activity, students worked in teams to design blueprints for a Martian colony based on a certain number of cubic feet, according to the purpose of the colony (for example, mining or research). L3 engineers judged the designs. Student-astronauts, led by their team’s robotic expert, worked in Carver’s Lego Robotics Lab to build and program Martian rovers to find the spot on Mars that is actually named after our school so they could begin building their colonies.
We created a three-dimensional scaled Martian landscape using plywood, heat-molded plastic sheets created in our technology-education classes, and glued-on sand and rocks. When the rovers had problems with traction on the remote terrain, the students had to troubleshoot. They explained this adventure to the community on the morning news.

Student engagement and mastery of the standards we built into the program increased after the Mars Simulator project. So, the teachers designed a curriculum that could be applied to all kinds of other projects such as Carver’s Mock Trial of Lee Harvey Oswald. For this project, student-lawyers investigated Kennedy’s assassination by reading and summarizing authentic testimonies (language arts) and ballistic, acoustic, and medical records (science). They also took a field trip to the scene of the crime, worked with a local lawyer to study the law (social studies), created a scale model of Dealey Plaza (math), and video-conferenced with high school criminal justice classes for legal help (technology).

We’ve had a hard time fitting all the standards for all subjects into these large simulated assessments. For example, the number of places that offer a logical alignment for a chronological U.S. History class and science standards is minimal. Just as textbooks or standardized scope-and-sequence plans can limit innovation, so, too, could our system, if we were not careful. Therefore, we are currently reworking our Odysseys into smaller, more flexible units that might only integrate math and science or history and language arts. We believe this will help us focus our take on problem-based learning while still seeking community involvement and, most of all, student engagement.