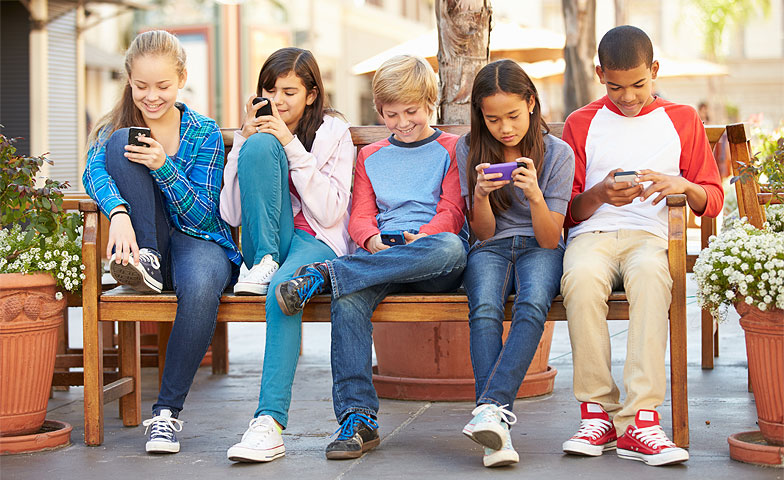 A rite of passage for many students entering middle school is being handed their own cell phone. Chances are that parents of kids entering fifth, sixth, or seventh grades have discussed cell phones ad nauseum because their kids have been anticipating getting one for a long time.

It makes sense; middle school means gaining some independence, and developmentally, kids are at the age when the instinct to separate from parents begins. These discussions no doubt include the topic of texting and using social media. For parents, these conversations are an unwelcome cacophony of stressors, signaling the end of the simpler, off-the-grid days of elementary school.

But to the kids, this is exciting stuff, signaling their entrance into the world of freedom, and the best kind of freedom: social freedom.

As a middle school teacher, I see first-hand how the cell phone has become the most impactful social instrument in human history. In my school, sixth grade is the landmark age when most students own a phone, and I watch them become attached to it like a new pet. Their little faces gaze at the screens as they look deep into the abyss of the social media, texts, and pictures.

When they’re in the “phone zone,” they abandon awareness of the outside, real world for the digital world of texts and pictures. Who could have imagined that one piece of technology could make texting and sending pictures more appealing than talking and hanging out? And who could have imagined that pictures and messages would be considered legitimate forms of socializing? But they are for young people.

In recent conversations with parents of middle school students, I’ve heard harrowing stories about their kids’ texting lives. From these conversations, I realize that young people’s inability to recognize the connotations of words, understand the tone of messages, and discern appropriate humor, causes negative social situations that they never before experienced.

All the parents’ stories had the same ending: friendships were deeply impacted by texts. When I find myself commiserating with parents who look shell shocked that a phone could inject so much strife into their kids’ lives and theirs as well, I secretly lament the fact that school experiences for the 21st century learner can be impacted by the complications of modern communication.

For several years now, schools have addressed the perils of social media, but it’s become increasingly apparent to me that tweens and teens need developmentally appropriate texting lessons to proactively address the perils of texting. Committed, continual instruction on texting should be as significant as teaching basic manners to young kids. Young people need to be taught the ways of proper text communication.

Here’s how I did it. The sixth grade students buzz directly to their desks, each girl loaded down with a huge backpack until thud, thud, thud, bags are dropped on the floor. The girls slide into their seats, lounging every which way. More motion comes in waves over the class as the kids retrieve books and pens out of their bags. Once the students settle, they look at each other and say hi to their peers. Greeting one another is a daily ritual in my classes so together we build a culture of camaraderie and a routine of practicing social etiquette.

One outgoing girl named Nora says to her neighbor, “Caroline decided it was weird sock day.” Immediately, we all look down at Caroline’s socks, orange and white knee-highs with pictures of dragons and fire blazes on them. The entire class, including myself, giggles as we see that Caroline is delighted with the attention. She raises her feet and says, “I couldn’t find any white socks this morning so I had to borrow my brother’s. He’s into dragons.”

This encouraged more giggles. At this moment, I could have killed the jovial mood and reiterated the uniform policy, but I refrained and instead asked the class, “How would Nora’s comment be received if she texted that same comment about Caroline’s socks to Caroline or to someone else?” Without hesitation, Caroline said, “That would have bothered me if someone texted me or anyone else about my weird socks. That’s just mean and annoying.”

“But Nora’s comment made us all laugh, didn’t it?” I continued, “We could see Nora’s smile as she made her comment, and we could hear her lighthearted joke in it.” The class agreed. It was a great way to start class. A clever, insightful student chimed in, “But if I read this as a text from Nora, then I would think Nora was rude, and I know she’s really not.”

I insert my instruction: “Exactly, that’s what we call tone. When we communicate, our tone matters as much as the words we choose. Tone is the attitude and feelings behind the words. We know Nora’s tone was funny and she wasn’t being mean. We have to think of how our texts will seem to others. Ask yourself what the tone of your messages are and if readers will understand your tone.”

I posed a scenario to take the instruction further: “We’ve all said or expressed something mean; we can’t deny it. What if you text your best friend that Mrs. McGuiness wears ugly shoes. You intend this message to stay between you and your friend, but let’s say this message is sent to other classmates. Pretty soon there’s a big group of kids reading this text.

Soon, I find out about it. How would I react if it were just between you and one other person, and how would I react knowing much of the class has read it?” “Awwwkkkkwaaard.” sings a student in the front. “Awkward for whom, the texter or for me?’ I ask. “For both of you, because it’s a mean comment about you, which is bad, and now the girl’s one text became a huge thing about a teacher and she’ll get in trouble,” the singing student replies.

“Yes, I agree, and her one judgmental comment is now a class problem. We’re embarrassed, and I’m disappointed that a student would write that about me and tell everyone.”

“But she didn’t want to tell everyone; it just got out. She didn’t intend for this to happen” a budding lawyer next to the window retorted. “Ah right,” I responded, feigning forgetfulness. “I must remember that it was intended for only one person. That may make me feel better, but probably not. I’m a little humiliated and hurt. It’s hard to remember that it was for only one person to read when it’s been read by a lot of people.”

I hope my point sticks, so they learn that no text message is sacred and stuffed safely inside some phone vault. They learn that a texter’s intentions, whether mean spirited or not, can explode to the point where people are hurt, humiliated, angry, and upset. As a class, we come up with a class rule:

It’s now on our bulletin board