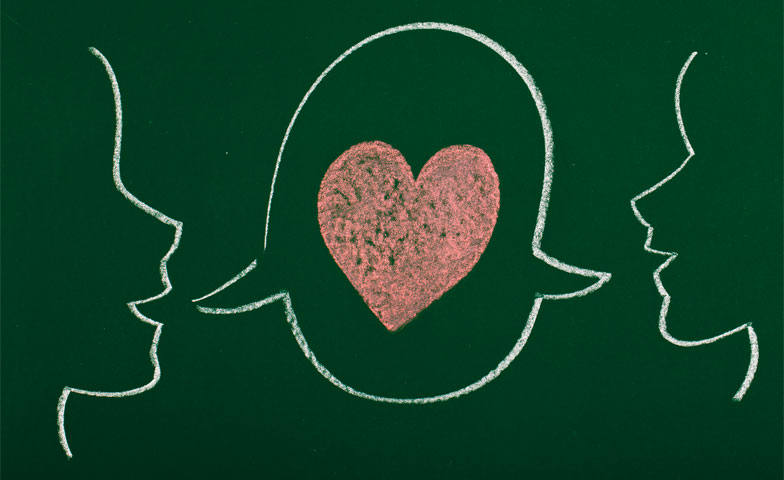 As educators, articulating our thoughts to middle school students can be one of the toughest things to do. There is a delicate balance between saying what we mean and saying the right things to produce positive outcomes. A simple slip of the tongue can turn the intentions of building confidence within our learners into making them feel that their efforts aren’t good enough.

One significant goal of teaching is to help students develop cognitively, socially, and emotionally. Verbal responses to students’ performance all too often includes sayings such as “Good job!”, “Great effort!” or “You’ve knocked it out as usual!” However, things can get tricky when we’re trying to support a student who is having difficulty discovering their assets or even keeping up with basic assignments and benchmarks. It is during these instances that what we say matters more than how we say it.

Many adults and adolescents communicate differently. Statements like “Try harder” or “put more effort into your work,” are delivered with the hope of encouraging students, yet generic statements and quasi-motivational talk could create a barrier between a teacher and a student who feels frustrated or disconnected.

How can educators transform our talk in order to transform our students’ mindsets? Can we blur the lines between guidance and honesty without condemning our students or contributing to making them feel hopeless?

Below are four suggested methods for supporting students by using positive talk.

Confirm their concerns, then meet them with optimism:

Middle school students can be very honest about their opinions and feelings toward a task. Whether it’s a discussion, assignment, or exam, if they’re apprehensive or unprepared for it, they will likley voice their concerns. As teachers, we sometimes disregard their concerns. Instead, we try to persuade them that they’re

too hard on themselves or lacking confidence.

We must remember that our middle grades students can have insecurities and concerns that maturity hasn’t yet resolved. They voice their concerns as a way of expressing themselves and seeking resolution. Teachers need to be honest with them, confirm their concerns, and then respond in optimistic ways.

I would often dismiss or respond negatively when a student claimed, “This is too hard to do.” Now, I confirm their feelings with an affirming statement like, “I understand. It does look complicated or a bit overwhelming.” Then I meet them with optimism and a resolution. For example, “I believe you can do it because you’ve practiced this before and you did well. Let’s look at it and see why it seems difficult.” This kind of positive talk validates their feelings without giving them an exit strategy that fosters making excuses or giving up. It also demonstrates my confidence in their ability to perform and demonstrate resilience—a trait that some middle schoolers lack. Additionally, it teaches them to evaluate their concerns to consider different ways to approach challenges.

Rhetorical questions often seem like passive-aggressive conversations. You want to make the person think about their actions without sounding condescending. Unfortunately, rhetorical questions can also block meaningful communication, and neither party feels like they’ve gotten their point across.

Questions such as “What’s your problem?” or “Did you think before you did that?” serve no point other than to make a student feel bad about their decision-making process. Worse, some rhetorical questions breed facetious responses. For instance, a question such as “How many times do I have to tell you …” could foster the response, “Twenty times,” in which the conversation becomes a tug-of-war.

Asking students rhetorical questions can produce different results. The student may give a blank stare and the ever-so-popular response, “I don’t know,” or the student may shut down and become completely unresponsive. Both of these results are defense mechanisms of a student who is in need of support in order to determine a plan of action.

Instead, ask questions that facilitate reflective responses. Instead of, “What’s your problem?” try “Is there a reason you’re behaving this way?” Even better, state your observation and put the ball in their court, “I noticed that you were talkative during the lesson. What questions do you have?” Although the student’s answer might not be entirely truthful, your questions will open the doors for you to hear a response and lead to a focused conversation.

Give them more than a name. Give them a new perception:

When you refer to someone by his name, you grab his attention and implicitly communicate respect. This may lead to the perception that the person is important. I’ve seen a video clip of a basketball coach who had a different handshake for every player on the team. Before a game, the coach greeted every player with their unique handshake. At first, the gestures, with their over-the-top high-fives, handshakes, and salutes, were comical. Then, his point became more evident. He wanted each player on the team to feel like they were noticeable—an integral member and someone who deserved attention. He enhanced their perception of their value to him and the team.

A middle school teacher’s schedule can be too complicated to create handshakes for each student. However, making sure to address students by their name is very important. Instead of referring to Greg as simply “Greg,” refer to him by something he’s particularly good at. For instance, “Okay Geography Guy Greg, come to the smartboard and highlight the countries that make up Western Europe.” Or, “Spelling whiz Stacey, can you write down this week’s vocabulary words?” This small use of positive talk can show students that their efforts are noticed and appreciated.

From traffic jams and flat tires to missing the school bus or no clean clothes to wear, both the teacher and student can carry a lot of emotional “baggage” with them in school.

In many elementary classrooms, teachers have “morning meetings,” where children sit in a circle and interact socially before their educational journey for the day begins. In middle school, this practice is less likely to be seen because students transition to several classes throughout the day. Busy schedules and short instructional times decrease the opportunity for “morning meetings” or social circles.

Some middle schools are now integrating class meetings into an advisory period to emotionally connect with their students before the instructional day begins. As teachers carve out time for positive talk, it changes the course of behavior for everyone. Three minutes of dialogue that begins with, “I want everyone in this classroom to have a great day. It may seem tough, or you may be tired and frustrated, but you can still make it a great day. What are some ways you can choose to be great today?” encourages students and builds positive relationships. This kind of talk appeals to their emotions and their thoughts. It makes the teacher seem approachable and relaxes the students. Wishing your students well acknowledges that they may be facing some challenges, but their teacher is rooting for them to succeed.

What will your middle school students remember about what you said to them? Will they remember your disciplinary or correctional words or will they remember your positive talk and encouragement? Choose to use language that helps develop students’ autonomy and resilience. Communicate honest words of hope and possibility in each of your students. And, model productive language as a catalyst for student development.