The mother of a seventh grade student at Canonsburg Middle School in Pennsylvania sent the following message to Mrs. Wright, a language arts teacher:

Just wanted to let you know how much Alex has been enjoying The Lightning Thief. He has been reading it on his own, without the constant reminders from me. I found him in his room the other night reading (Xbox and TV inches away), and when I told him it was time to leave, he said, “But I just got to a really good part!” So … I wanted to thank you for everything you do to engage these kids in reading. We appreciate you!

What inspired Alex to put down the Xbox controller, leave the television turned off, ignore his iPod Touch, and reach for a book?

And why does the seventh grade hallway look like a forest? 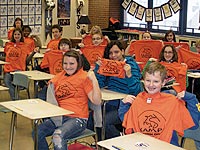 Capitalizing on the popularity of the young adolescent book series Percy Jackson and the Olympians, seventh grade students at Canonsburg Middle School recently participated in a cross-curricular thematic unit centered on The Lightning Thief, the first of author Rick Riordan’s books in the series.

The Lightning Thief tells the story of 12-year-old middle school student Percy, who discovers he is a demigod. The award-winning book captures students’ attention with tales of Percy’s adventures amidst mythological creatures who come to life in modern-day America.

Before opening the book, students learned about Greek civilization in their social studies classes and then read ancient Greek myths in language arts. With a strong foundation in Greek history and mythology, students were poised to begin reading The Lightning Thief.

To kick off the project, the teachers transformed the hallways of CMS into Camp Half-Blood, a key location in the book series, and the students became the “campers.” Overnight, artificial trees were “planted” throughout the hallways, and each classroom’s doorway was decorated with a roof and walls to represent a cabin from the story. CMS students, 370 in all, were bewildered over the changes until they were called to the auditorium for the opening assembly that explained the transformation. 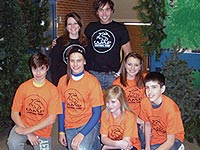 Mrs. Wright, Mr. Kuharcik, and seventh graders from each of the three teams pose in the center of the seventh grade hallway, which was decorated as a forest scene from the book.

At the opening assembly, the students watched a video message that was sent to the school from the Mt. Olympus Oracle (our own principal dressed as Zeus). The oracle explained that they would be reading the novel The Lightning Thief and that each homeroom would be representing one of the Olympian gods or goddesses.

The oracle explained to the students which rooms would represent which cabins from the story. The students cheered as the names of the different Greek gods and goddesses were announced and they learned whose cabin their room would represent.

After the students received instructions from the oracle, they returned to their homerooms and began working on the transformations. They decorated classroom doors with the Olympian’s mascot and mounted colored shields with their cabin’s name on their lockers. Students were given orange camper T-shirts that they wore to school each Friday; their teachers had matching counselor shirts.

Canonsburg Middle School embraces the This We Believe philosophy of providing a middle school experience, and teaming is the keystone of the middle school’s success. 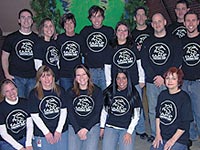 Seventh grade teachers took on the roles of Camp Counselors during the thematic unit.

The seventh grade is composed of three teams of five teachers: language arts, English, mathematics, social studies, and science. With the students fully engaged in reading the book, teachers in all content areas provided a cross-curricular experience, incorporating elements of the book in all classes.

The unit culminated in a field trip to see the movie Percy Jackson and the Olympians: The Lightning Thief at the theater. Many students are reading the sequels in the series and are still wearing their camper shirts to school, which demonstrates the power of teaming and creating thematic experiences at this level.

They are members of AMLE.