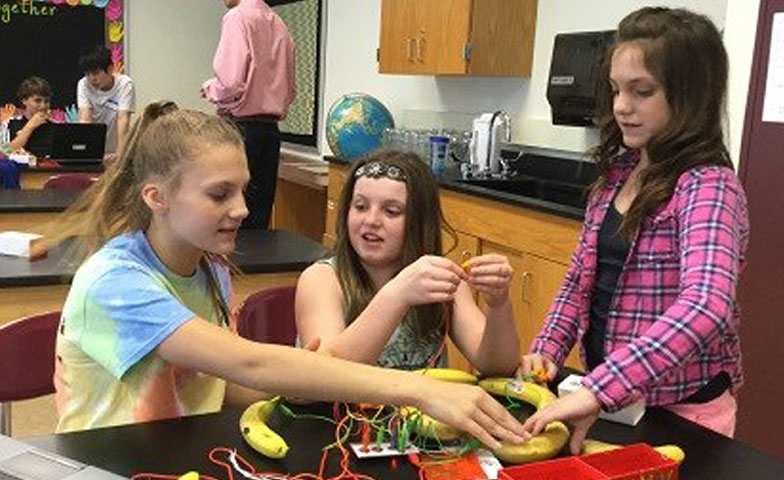 Providing students with opportunities to explore, wonder, and discover.

Mini-Course Day
As I began teaching a thoughtfully designed lesson on conductors and insulators, I was met with blank stares and compliant students, patiently waiting me out. If they weren’t such compliant young people, they might have said, “Really, is this necessary? Can we start learning now?”

What I did not realize at that time is that learning would occur as soon as I got out of the way.

This article is a reflection on the value of learning from the practice of tinkering. The lesson in which I “stood in the way of learning” occurred as part of a special event in our school on Mini-Course Day. This day is one of the opportunities that we build into our schedule to give students an opportunity to explore their unique interests.

Every teacher selects a course to teach, and my partner and I decided to teach about electrical circuits. We had learned about an inexpensive kit that invites you to experiment with circuits connected to the computer as input devices. Our curriculum includes a unit on the properties of matter, so we decided that students would use a circuit to classify objects as conductors and insulators.

The kit we planned to use was called Makey-Makey. We had learned about it at a professional development opportunity and decided to use it because we believed it would encourage student engagment.

On Mini-Course Day students were captivated and began the process of tinkering once we released them to experiment. As we moved throughout the room, we heard the conversations of partners trying to figure out how to use the objects as input devices for the computer. They had seen an example in which a banana performed the task of a mouse click and wanted to replicate it. I was surprised and impressed at their reliance on each other to problem-solve when it did not work as they expected.

The Act of Tinkering
Their problem-solving took time and was an iterative process. The act of tinkering is often used to denote an ineffectual activity. It could be said that tinkering was once valued and even a necessity in our culture. We tinkered because we needed to improvise and to fix our homes, our appliances, and our cars. As goods became more available and affordable, we became consumers with a dispose and replace mentality (Dougherty, 2012).

In the recent decade, tinkering has gained attention in conjunction with the Maker Movement. Dale Dougherty, founder and board chairman of Maker Ed, is often given credit for popularizing this movement. Tinkering has now become a progressive concept in science, technology, engineering, and mathematics education.

We once again appreciate that tinkering engages learners in creative activities that are essential for the development and construction of the learner’s ideas. Concepts and phenomena are experienced through the practice of exploration, questioning, iterative designing and testing, and problem-solving.

Tinkering differs from problem-based learning in that problems or challenges are not assigned; rather, they are identified by the learner through initial exploration with materials, people, practices, and ideas. Tinkering emphasizes creative, improvisational problem-solving.

Knowing that tinkering produces powerful outcomes for learning, why isn’t it more prevalent in our schools?

Libow Martinez and Stager (2014) attribute this reluctance to the school accountability movement. If teachers must stay on a rigid timeline to ensure narrowly defined learning outcomes, they have little time to give for open-ended exploration and discovery.

It is possible that the accountability movement, that was intended to improve the quality of education, has actually contributed to its shortcomings. Maybe it is time that we all “got out of the way” to let meaningful learning occur.