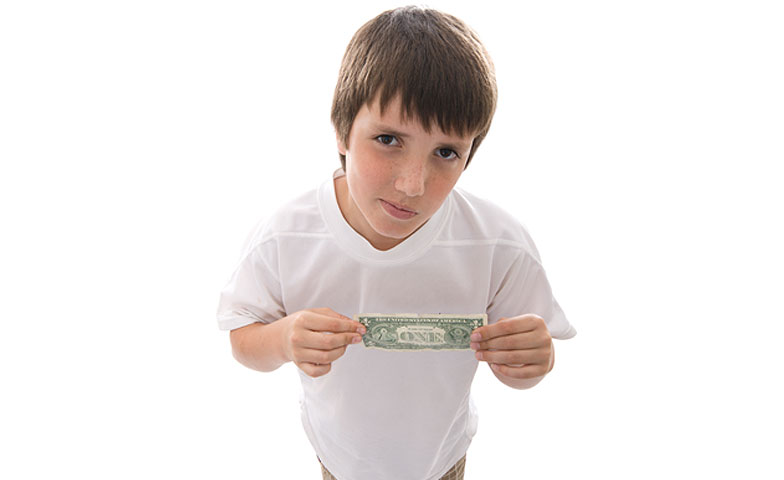 “Everything seems cheap—when was this book made?” asked one student as we embarked on an activity to engage students in a meaningful exploration focused on mathematical modeling and connections using the children’s literature book, Alexander, Who Used to Be Rich Last Sunday (Viorst 1978). In this account, Alexander is given $1.00 by his grandparents and, despite his best efforts to save his money, quickly spends his dollar. Students were quick to notice the price of goods today are much more expensive than in 1978, and they were interested in this meaningful context and humorous story.

In this article, we describe our work with students to make connections across decimals, fractions, and percentages as well as how Alexander’s money-spending journey can be modeled using two representations (strip graphs and circle graphs) and two tools (a speech bubble and a fraction wheel). The cornerstone of this work is the explicit link of the same components of Alexander’s expenditure of $1.00 to different visual models via the use of representations and tools that support students in making sense of the context. Our activity engaged students in several of the Common Core State Standards for Mathematical Practices including Model with Mathematics (MP4) and Use Appropriate Tools Strategically (MP5).

To introduce Alexander, student groups of three or four were given one strip of cash register tape that was approximately 110 centimeters long and a meter stick. Next, each group prepared their strip marking units of one centimeter with tick marks across the top of their strip for the full length of the meter. This prompted a brief review of the units on a meter stick by discussing the length of a meter, centimeter (the unit used), and half-centimeter (not used).

Then we began to read the story. Students were immediately interested in Alexander and his family as we built the context. Once we got to the point in the story where Alexander was about to start spending his dollar, we paused and asked student groups to prepare to mark their strip graph with his expenditures using markers.

Constructing and Interpreting the Strip Graph Representation
We started the strip graph together when we read Alexander’s first expenditure, which was “when I used to be rich, I went to Pearson’s Drug Store and got bubble gum. And after the gum stopped tasting good, I got more gum. And even though I told my friend David I’d sell him all the gum in my mouth for a nickel, he still wouldn’t buy it. Good-bye fifteen cents” (Viorst 1978, p. 12). On the strip graph, student groups marked off 15¢ by counting 15 units (not counting tick marks but instead using unit sized jumps) to represent the amount and labeled the section “Gum 15¢.” Then they passed the marker to the next student in their group, taking turns to record each expense.

Then students read about the rest of Alexander’s journey and worked independently to document the remaining expenditures on their strip graph (see Figure 1). We also found that one group had incorrectly prepared their strip graph. When they got to the last expenditure they realized they only had 18 jumps left, when they needed 20:

Teacher: Oh, and you needed 20, so what could have happened?

Student 2: Let’s check them (students and teacher work together to check strip graph)

Teacher: What is happening here? (teacher points to a space on the strip graph larger than a centimeter)

Student 1: Oh, we must have forgotten to make tick marks for two of the centimeters.

Student 2: Can we just add two centimeters to the end (of the strip)?

Teacher: If you could, what would that represent on your strip graph?

Student 2: What do you mean?

Teacher: Then how much would you have in total?

Teacher: What is problematic about that?

Discussions such as the one highlighted here identify the importance of constantly refocusing students on the meaning of the representation, in this case reminding students that the strip graph represented how Alexander spent his $1.00. Until we prompted this group to reason why they couldn’t just add two tick marks to the end of their strip, they had temporarily lost the connection between their strip graph and the context.

After students finished creating their strip graphs, each group received a speech bubble, which is a tool used to communicate ideas and discoveries. Then students were given the following prompt: What do you notice? What is your strip graph saying (focusing on the mathematics)? Write a statement that helps you reason about Alexander’s expenditures. We wanted students to not just read the graph (e.g., Alexander spent four cents on the magic trick) but instead to read “between the graph” or “beyond the graph” (Curcio, 1987). Groups negotiated what to put on their speech bubbles and their responses varied in sophistication. Some groups combined expenditures of “like things” such as fines or things Alexander could eat and reported on the total they represented (e.g., gum and chocolate bar totaled 26¢). Other groups made comparisons such as how much was spent on fines compared to other expenditures. Several groups created multi-step problems by combining and comparing amounts. Most interesting, some groups used fractions in their speech bubbles. One group stated that 4/20 of Alexander’s money was spent at the garage sale. When we asked this group how they got 4/20, they stated that “We had 20/100 to represent the garage sale, which simplifies to 4/20.” This allowed us the opportunity to thank this group for being precise by using the word simplify rather than reduce, as fractions do not actually get smaller. Figure 2 showcases one group’s speech bubble as they considered how much Alexander spent on average for each expenditure. We were impressed that this group reasoned about the strip graph in this way, considering we had not mentioned or suggested they explore the average.

Checking an Estimation with a Fraction Wheel

Constructing and Interpreting the Circle Graph Representation
The next representation converted the groups’ strip graphs into circle graphs. To do so, they taped their strip graph end-to-end, creating a loop that was then centered on a piece of chart paper. All students in a group worked to construct the best circle possible with their strip graph loop by having one student trace the outline of the loop onto the chart paper while the others held it stable. Then, keeping the loop in the same position, students created tick marks on the circumference to model where the line on the loop matched each expenditure. Students labeled each section with the expenditure and amount and when complete moved the loop to the side. Next, a point was placed in the middle of the circle and students used a straightedge to draw segments out to their tick marks, creating sectors representing Alexander’s different expenditures.

Checking an Estimation with a Fraction Wheel

Once all groups completed their circle graphs (see Figure 3), each group received a second speech bubble and the following prompt: Now that you have a circle graph that gives you a “bird’s eye view” of the data, what do you notice? You can use the word “about” as you write your statement. Given the flexibility to use the word “about” empowered students to think about estimating amounts that were “about” a particular fraction. One group noticed that “betting, gum, and the garage sale make up about 1/2 of the circle.”

Estimating with a Fraction Wheel Tool
We found this to be the perfect opportunity to introduce students to a fraction wheel (Figure 4), made from two paper plates. We asked the question, Can you find some combination of expenditures that are about 1/4 of your circle? 1/3? We circulated with the plate and had students test their hypotheses by placing the plate in the middle of the circle as they matched amounts that they estimated were about 1/4 or 1/3 of their circle graph to the wheel. We were especially interested in one student’s abstract thinking when he mentioned that if he could move around (reorder) the expenditures on the circle graph, there would be different amounts that could combine to be about 1/4 or 1/3 on the fraction wheel. Figure 5 highlights an example of students’ fractional thinking for this second speech bubble, as they considered using “about” in their statement.

Culminating Reflection Questions
After students considered Alexander’s expenditures through the use of two representations and two tools they were given a set of culminating reflection questions (Figure 6) focused on getting students to think about their models, the tools they used, and connections to the context. While we used all of these questions with our classes, you could easily pick and choose a subset of these questions that best meet the needs of your students.

This activity offered an engaging and meaningful way to explore multiple representations of the data from Alexander’s money-spending adventure using graphs and interpreting the information in words and through the use of tools. We hope our discussion of this exploration inspires other teachers to try this activity as well as others that incorporate children’s literature in their own classrooms, finding ways in which to best meet the needs of their own students.