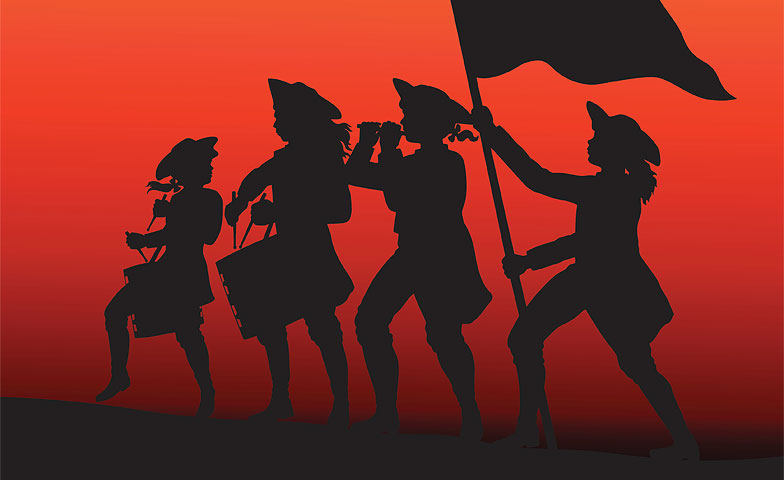 There are a number of lessons I have learned in my 20 years as a teacher of American History.

All three of these lessons are important to keep in mind as educators, but it’s the last one that has changed my approach to teaching in recent years.

When I was in middle school, history was taught in chronological order, without exception. We sat in straight rows, faced the chalkboard, and dutifully wrote down what the teacher said. History was a story that was told using lots of dates, names, and events that needed to be memorized.

Don’t get me wrong, much of what we were learning was a beautifully amazing story that fascinated me as a child, but it was often very disjointed and hard to connect. I remember thinking about each chapter as its own separate entity, that once completed, could be discarded in order to make space for the new information that I was to learn. My “velcro effect” was lacking.

Today, I still tell the story of American History, but the approach is quite different. Yes, I have my students sit in straight rows once in a while, and yes, my students still dutifully take notes during class, but the cram, memorize, regurgitate routine is no more.

Much of this is the result of two major changes in my teaching philosophy. First, content, which used to be seen as the driving force in my history class, has taken a back seat to skill building and focusing on making connections. And second, I’ve moved away from telling the entire chronological story, and teaching in more of a thematic manner with projects that are geared to being more relevant.

The idea of teaching history through the scope of “revolutions” was a pretty big shift in how my classroom operated on a day to day basis. The first thing I needed to do was to create a definition of what a revolution is and then find content that would fit the definition. I decided to make it easy, just three steps.

I ended up cutting my content almost in half. I established four content pillars: The American Revolution, The Constitution, Westward Expansion, and The Civil War. These units gave me a structured approach to covering the necessary standards and creating an understanding of American History, while also providing a perfect backdrop for the aforementioned theme of revolutions.

Instead of 15 chapter tests that I had given in the past, I was cutting back to four unit tests. Instead of the traditional fact-based reports that students created in the past, they were working on connecting what they had learned in class to relevant aspects of their own lives. It was hard for me at first to cut back on some of the history that I very much-loved teaching, but the results were immediately evident.

Studying the American Revolution first allowed me to lay the groundwork for what a revolution was and what it meant to be revolutionary. I mean, how much more revolutionary can you get … angry colonists, protests (violent and non-violent), leaders emerging to take on the cause … the students were able to identify and create a relationship between the theme and the content right away.

This unit also just so happened to line up perfectly with our eighth grade interdisciplinary trip to Boston, Massachusetts, that we take each year in November. We were able to finish the unit by the middle of October, have a test on the material covered, and then work on creating a relevant project that would help them “connect” with the content and the theme.

Our Boston Freedom Trail Project, and consequent Detroit Revolutionary Trail Project, was born out of this combination of content, thematic approach, and timing … and it has been a major success over the past few years. We ask the students two weeks before our trip to Boston to work with a partner to research one of the stops of the Freedom Trail. They research their specific stop, looking for interesting facts, historical significance, why it’s on the trail, what visitors can expect to see while there, and most importantly, what makes this stop revolutionary (based on our previously established definition).

Once this information is found and organized, students put it together in a final, visually appealing format. Students have created YouTube quality videos that visually take the viewer on a virtual tour of the stop, while providing interesting details using voiceovers. Other students have created large poster boards showcasing their information in a colorful, visually appealing style. Giving students choice in this final product is certainly an opportunity for the groups to utilize their strengths and creatively think about what would work best.

I usually give the students four to five class periods to work on this, with the final class period being used as an opportunity for the students to share their final product. This presentation day happens the day before we leave for Boston … which is great, as it provides a strong base of prior knowledge to be established for each student. When we get to Boston and experience the trail, students get another chance to do a quick 30-60 second presentation about their stop while at the stop … essentially, they become the guide. It’s fun to watch them point to artifacts, plaques, or monuments that they had been researching in class, and seeing, for the first time, the places and objects that had only been images on their computers before. They take great pride in sharing their knowledge with their peers in the moment. The experience on the trail is a great way for the students to connect with the history in a hands-on, fun, and educational way.

My first question when we get in the classroom after returning from Boston is always the same, “So, what did we love about the trip?” Inevitably, the students will talk about the fun they had with their classmates and the dinner cruise we take around the harbor, but when I redirect the question back to educational experiences, the Freedom Trail tops the list. My follow up question is then, “Why do you think that Detroit doesn’t have a trail like this?” Most students respond with statements about how Detroit really didn’t play a role in the American Revolution or that Detroit doesn’t have the same kind of history as Boston. True, maybe, but when I press harder and challenge the students to think about the Freedom Trail as not just an American Revolution Trail, but a trail that showcases revolutionary events that took place in Boston, the real question then becomes, are there revolutionary aspects to the city of Detroit?

Time to go back to our definition of what makes a revolution: unhappy with the status quo, better plan, successful implementation of that better plan. So, are there aspects of Detroit’s history that could work? Heck yeah there are! Getting the students to start thinking about Detroit differently, different from the national negative light that is often cast, is an important lesson for me to teach. Getting them to look at some of the cool, interesting, and revolutionary things that Detroit has been part of is a real game changer for many of my students.

The Detroit Revolutionary Trail Project asks the students to find places in Detroit that represent revolutionary actions in the city. Students are divided into groups again and asked to brainstorm revolutionary aspects of Detroit. I get everything from the auto industry to Motown Records to the art and cultural explosion that is currently taking place in the city. The students are asked to narrow their stops to 5 or 6 (I don’t ask for 16 like the Freedom Trail) and begin to collect information that will be helpful in describing historical significance of the place or event and determine revolutionary components. They create a Google Slides presentation that is visually appealing with lots of images and then they create a sales pitch. I call it a sales pitch because they are not just presenting it to me; we scour the community and alums of the school to create an authentic audience for the students to present to. I often get asked the question by the students, “Do you think that they will create our trail for real?” To which I always just shrug and say, “Who knows?”

The day of the presentations are awesome. The kids are nervous because there are people in the room who usually aren’t there … they are adults, but not teachers. It’s strange and intimidating, but also super exciting. And the kids don’t disappoint, they bring out their A game. They passionately plead their case for why their trail not only should but must be made. Full disclosure, none of the trails have been made in the city of Detroit … yet.

The month spent on this unit is amazing. I like to think that it involves the trifecta of educational learning: learn it, experience it, and apply it. I’m so impressed with how the students embrace the lessons from this unit and walk away not just looking at what makes a revolution, but more importantly, how they can be revolutionary. If our students are the future of our community, it’s important that they understand this concept and follow the wise words of the great Mahatma Gandhi to be the change that they want to see in the world.