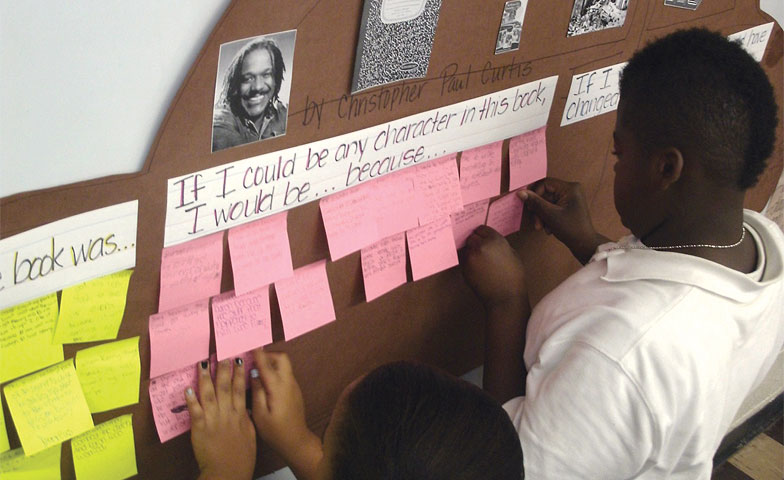 Some see graffiti as vandalism; others see it as a work of art. Urban artists use graffiti to send political messages—as a form of meaning making in the larger society. Indiana University Professor David Hanauer suggests that graffiti offers marginal groups the opportunity to express themselves publicly.

In the middle level classroom, graffiti can make reading comprehension a personally contextualized, meaningful activity for all students—and especially marginalized students who are reluctant to speak up in class.

Kathy Short’s research emphasizes the use of visual literacy for meaning making—in particular the use of graffiti boards, which capture students’ thoughts and feelings as they delve into a text. Students record and share in graffiti-like fashion—with quotes, sketches, or simple words—their thoughts about how they are connecting to the text. There is no particular organization to the students’ images and words. They are simply written randomly on the graffiti board, which is often no more than a large piece of paper.

Graffiti murals incorporate features from the text. In this example, students answered questions about The Watsons Go to Birmingham—1963.

On the other hand, a graffiti mural is much more formal and systematic in terms of how students record their responses. On a graffiti board, students jot down ideas and sketch thoughts in small groups as they respond to a text; a graffiti mural requires the whole class to answer comprehension questions using sticky notes or tags—a slight variation of a shared writing technique. Similar to graffiti boards, graffiti murals require a great deal of interaction, deep communication and comprehension, and a reinforcement of the shared purpose in the task.

For English language learners, the graffiti mural provides comprehensible input by including new and diverse ways of looking at the text—well beyond merely circling the right answer. The graffiti mural is also an example of a tactile text that emphasizes a kinesthetic, touch-based approach to learning.

Finally, there is a sense of aesthetics involved in using graffiti murals, since the teacher must incorporate visual features and carefully examine the use of color, shape, depth, and alignment in its design. When designing the mural, the teacher keeps in mind that it is a decorative piece of art that will cover the classroom wall, a representative image of the text itself, an interpretive canvas for students’ comments, an organizational tool for posing comprehension questions, and a transformative medium that invites students to construct meaning.

When incorporating a graffiti mural into the literacy classroom, the teacher takes a large piece of butcher paper and decorates the paper with the title of the text, author’s name, and aesthetically pleasing images and motifs from the text. Students can help design the graffiti mural.

After reading the selected text as a class—whether that is a nonfiction article, a piece of fiction, a painting, a piece of music, a poem—the teacher passes out sticky notes to the students, then reads aloud a comprehension question from the graffiti mural. Students write their response on their sticky note. The students do not write their names on the sticky note; rather like graffiti artists, they remain anonymous. Large sticky notes are preferable, and students should be encouraged to write on the back of the notes if necessary.

Students have at least 5–10 minutes to respond to each question. When the students are finished writing their responses, they come up to the graffiti mural and “tag” it by sticking their sticky note under the correlating question. The teacher can use a different color sticky note for each question and increase the aesthetic appeal of the graffiti mural as well as develop parallel constructs.

Once all the students are finished posting their answers to the first comprehension question, the teacher randomly reads aloud a few of the responses, encouraging dialogue around the selected responses. The students do not need to identify themselves as the author of a particular response under discussion; rather, they can remain anonymous.

In one predominantly African-American classroom, the graffiti mural was used as a culminating activity around the book The Watsons Go to Birmingham—1963 by Christopher Paul Curtis. After students read the book, the teacher created the “brown bomber”—the family car that plays a major role in the book—with brown butcher paper. She included motifs that were essential to the book, along with a photograph of the author in the driver’s seat. Instead of using questions, the teacher wrote three writing prompts that gave the students a springboard to dig deeper into the book:

The teacher outlined each of the prompts in a different color to correspond with the colors of the three sticky notes. In turn, this created a color-coded system to track and manage active student participation.

Because the students were able to stay anonymous, they were much more comfortable and confident in their writing, especially the boys. They also were more comfortable with the teacher reading their responses aloud as opposed to sharing their thoughts with the entire class. Every student wanted to participate, even students who were usually disengaged during the literacy block. Here are some student responses for the second prompt:

The teacher displayed the mural in the hallway outside of the classroom—the students’ work was now public art.

In a beginning-level Spanish bilingual classroom, the students responded to questions written in Spanish.

In a beginning-level Spanish bilingual classroom, the teacher decided to read Click, Clack, Moo: Cows That Type in Spanish (Clic Clac Muu: Vacas Escritoras). Because the story is about cows that type, she drew a beautiful picture of a cow on the butcher paper. Inside the cow, she wrote three comprehension questions in Spanish:

During the read-aloud, the teacher asked students questions that would prepare them to answer the comprehension questions on the graffiti mural. For example, she asked them about each animal’s problems, since this was a question they would be asked later on the mural.

When the students were finished answering each question, they placed their answer under the correct question on the mural. Then, the teacher read aloud what they had written.

The newcomer students who were reluctant to write their responses felt more comfortable drawing them. Some labeled parts of their drawings and others wrote their entire response in Spanish. Students who have been in the bilingual program since Kindergarten used specific Spanish words from the text as they wrote—especially characters’ names, spelling words, high-frequency words, and vocabulary words.

Throughout my 20 years in urban education, I have observed too many classrooms in which students were asked to be quiet and observant during a literacy lesson. Marginalized students benefit academically from activities in which all students have a voice. The graffiti mural allows students to connect with a text, make meaning on their own, and share in the collective experience of responding to each other’s ideas and thoughts in a democratic and inclusive way.