One of the primary goals of education is to encourage, support, and facilitate students’ academic and personal achievement.

Eighth grade students at Springville-Griffith Institute Middle School in Springville, New York, were able to extend their knowledge and expectations last year with a project that reached the stratosphere—literally.

At Springville, teachers belong to academic teams that include social studies, English, math, science, and foreign language teachers. Every day, each team has an enrichment period during which students are able to choose an activity or project that interests them. The projects relate to the curriculum the students are studying at the time, but they are not graded. 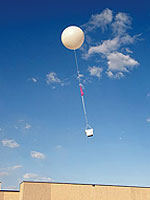 Springville teachers often describe enrichment as “things you always wanted to try but didn’t have time to during a regular class period.” One eighth grade team, the Roosevelt team, proposed a stratosphere balloon project as an enrichment project, and more than 40 students—nearly half of the academic team—volunteered to participate.
The goal was to launch a large balloon that would reach the stratosphere, 17 miles up, and bring it down with photographic proof of its flight. A capsule containing a camera and GPS would be attached to a parachute and lifted by a helium-filled weather balloon to take photographs of the earth. The project was modeled after a similar experiment completed by Massachusetts Institute of Technology students in September.

Preparing for Take Off

Students worked in groups, each responsible for a different aspect of the project. Some students researched GPS software and used a balloon trajectory program that utilized Google Maps to determine the best launch day. One group programmed a prepaid cell phone with GPS capability to locate the capsule after it landed. Other students took responsibility for documenting the process and creating a mini-movie of the entire project.

District technology specialists programmed a digital Canon camera with software that directed it to take a photograph every six seconds.

The capsule landed in a soybean field in Bryon, New York. The camera inside was still taking photographs when it was recovered.

The capsule group met another challenge when they realized that the nylon cord connecting the foam cooler capsule to the balloon was actually cutting into the foam cooler. After testing several different ideas, the students decided to use plastic tubes made from disposable pens as a barrier to prevent the nylon cord from damaging the capsule.
Before making a final version, the students dropped the test capsule, containing eggs, off the school roof to ensure the parachute size was adequate and the cord sufficiently supported the capsule.

After working on the project for about three weeks, the students eagerly awaited launch day. We contacted the Federal Aviation Administration in Atlanta for project approval and called the Buffalo Airport Air Traffic Control the morning of the launch to give them a heads up in the event any aircraft were in the area. More than 400 students watched as the balloon inflated to a 5′ diameter and students attached the capsule.
After a lively countdown, the balloon was launched to cheers of genuine excitement.

Students held their breath as the balloon lifted off, then burst into cheers as it ascended into the stratosphere.

The capsule was in the air for three hours and landed in a soybean field in Byron, New York, 50 miles from Springville. It ascended approximately 17 miles before the balloon burst because of the pressure in the stratosphere. The parachute gently guided the capsule back to earth.

The capsule’s precise location was transmitted to the chase team immediately after it landed, and the team located it soon after. The landing didn’t damage the equipment. In fact, the camera was still taking photographs when it was recovered!

The launch was a huge success, providing more than 2,100 photographs of the flight. Many of the photographs show local geographic features like Lake Erie while others show the blackness of space and the curvature of the earth. What’s more, the story was picked up by local and national media and has been recognized by Business First for a school innovation award. 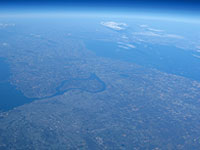 Students participated in an amazing wealth of experiences through this project. They learned about space, geography, teamwork, the scientific method, and creative thinking. As educators, we never really know the long-term impact we are going to have on our students. Who knows, some of these students might one day be inspired to become pilots, engineers, or astronauts because of this project.