Support, passion, and positive relationships are ingredients of an effective middle level school.

Henry Ford said, “Whether you think that you can, or that you can’t, you are usually right.” I often share this quote with students who tell me they are not good at this or that subject or can’t do this or that level of work. I am convinced that with the support of the school, students who truly want to accomplish something will succeed.

A positive school climate is critical to student and staff morale, and morale is all about relationships. When students and their families believe their teachers and administrators care about the students as learners, it’s amazing how their motivation and investment increase. The result: higher student achievement.

When a school tracks classes, the message to the students is this: “These are the smart ones and these are the not-so-smart ones.”

Years ago, Rye Middle School in New York had the following requirements for an eighth grader to enroll in higher-level math and science classes: The student needed a teacher recommendation, a final grade of at least 90 in the previous year’s science and math class, and a rank in the ninth stanine on the standardized test administered in seventh grade. These high standards imposed on young adolescents created an elite group of students selected to study rigorous classes deliberately designed for high-achieving kids.

One year, a student and his parents petitioned to overrule the teacher’s refusal to recommend the student to algebra. The class was already overenrolled and I did not have the resources to open an additional section, so I denied the boy’s request and enrolled him in an eighth grade math class.

In New York, any student may take the New York State Regents, a state-wide final exam. This highly motivated eighth grader and his parents hired an algebra tutor and in June, the boy sat for the Regents. He was pleased to tell me that he scored a 92% on the algebra test—a high score by anyone’s standards.

This incident certainly gave me something to think about. Why was I denying students access to classes they wanted to take? Could teachers be so sure that their students could not achieve in more challenging classes? What message was I giving the students?

A couple of years later, a student wanted to study earth science, but his seventh grade teacher did not think he had the stamina to undertake the rigors of the class and refused to recommend him. The student and his family petitioned for an exception and this time I listened.

The boy convinced me that he had a keen interest in the subject and that he would apply himself to his studies—and he did. At the end of the year, his earth science teacher presented him with the Earth Science Award in recognition that his achievement was the best among all the students in the class.

By tracking students and putting up hurdles, we are dividing the students into those we have confidence in and those we do not. At Rye Middle School, we now have a self-select procedure for science that has broken down these barriers.

Before students select courses for the coming year, guidance counselors visit classes and carefully detail the content of the science classes. For example, they explain what is covered in physical science—traditionally an eighth grade science—and what is covered in earth science, which is a high school-level class that ends with a Regents exam and awards high school credit. Students enroll in the class in which they believe they can be successful. We have used this procedure for four years and roughly 60% of the students select and successfully complete earth science.

As a school district, we are more aggressive with algebra. Why shouldn’t all eighth graders take algebra and enter high school with one year of high school math completed?

Five years ago, the district assessed the elementary and middle school math programs and made adjustments so all students have the foundation to take algebra in the eighth grade. This year, all but a handful of eighth graders took algebra and only 3 youngsters out of 230 did not pass the Regents. These students have the opportunity to retake the class or retake the Regents.

The barriers to more advanced classes have been removed in the middle school, and students are empowered to make decisions based on their interests. Students know that the educators believe in them and will help them reach their goals. We offer extra support to the students who select the more challenging science or are challenged by algebra.

For those students who want a challenge beyond algebra, math teachers provide a portfolio of enrichment activities students may complete throughout the year. At the end of the year, students’ portfolios are reviewed and they are interviewed by the math chair, who decides whether to grant the student an honors designation.

Cold, hastily spoken words can remain in the recesses of a student’s brain for the rest of his life. A young man I tutored throughout his high school years worked hard to overcome learning disabilities and with the support of his family and some teachers who believed in him, grew in confidence and achievement and graduated recently from Boston University. He says he has never forgotten the fifth grade teacher who told his parents that he would never amount to anything. 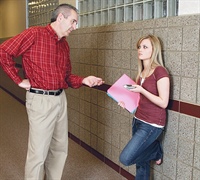 Academic excellence is established in an environment of trust and caring.

The language we use can have a profound effect on the students we work with every day. We must never use language that implies to students that they are not good at something. Of course we are challenged to remain positive and supportive when we are working with students who do not do their work or who frequently misbehave, but we don’t have a crystal ball that will predict their future and we must not act or speak as though we do.

I once was hired to replace a beloved teacher who had a heart attack shortly after the start of a new school year. One of the teachers on staff took over the honors English class for the first part of the year, and when I was hired in January, I stepped in.

As I reviewed the students’ grades a few days after taking over, I could not understand why two of my students were failing the course. My perception of them was that they were insightful readers and good communicators verbally and in writing.

By the end of my first quarter with them, both had earned As. I took each aside separately and asked why they had gone from failing to excelling. One student told me that he could not stay seated for the 45-minute class period and that the first semester teacher got upset every time he paced in the back of the room. I had never protested this student’s pacing because it did not seem to distract anyone and it appeared to help him concentrate. The other boy said that the first semester teacher told him that he did not belong in an honors class and as a result, the student doubted himself.

The three of us had a very productive year in honors English. I believed in these boys and accepted their idiosyncrasies and their abilities; they each developed a love of the subject. In fact, one announced he wanted to major in English when he went off to college.

Principals and teachers must work together to create a positive climate throughout the school. Principals should empower teachers to make instructional decisions as long as the decisions follow the district policy and school procedure.

Principals should never sweat the small stuff. I once saw a principal get upset with his assistant principal because she had given the band teacher permission to serve cookies instead of sheet cake after the band concert. Morale and the spirit of innovation became a thing of the past as the sense of joyful learning dissipated from the halls of the school.

People need to have the opportunity to be creative and even make mistakes! Positive morale is established in an atmosphere of trust.

Knowledge and skills are vital to educators’ success, but they must have more than that if they want to be successful middle grades educators. They need passion. They must enjoy going to work every day. When educators are enthusiastic about what they do, their students can’t help but get excited about learning.

This article was published in AMLE Magazine, March 2014.