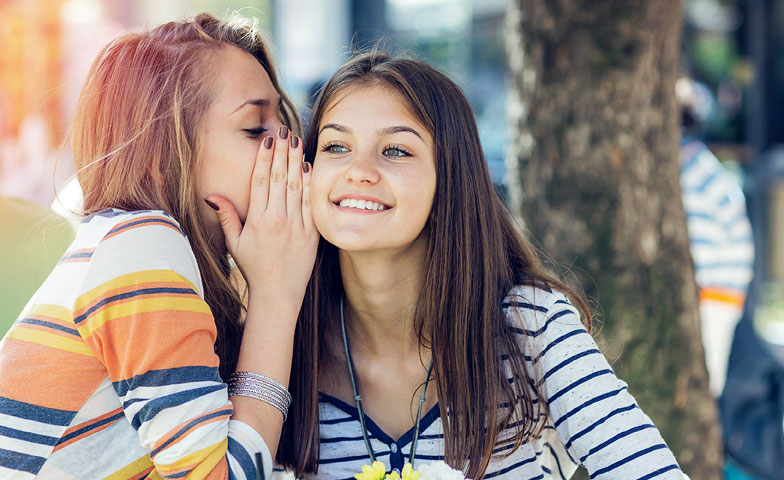 Seventh-grade teacher Laura Merrill looked around the room and asked her colleagues to close their computers. “If our students are brave enough to present to the entire staff,” she said, “we can give them our full attention.” The presenters, Thomas and Ian, are typical seventh grade boys. They know that group chats can go wrong and that kids gossip.

I’d been leading weekly discussions with their class about social issues for months, but too many kids stayed silent. I wanted more voices, so I asked the students to lead the talks. I told them they could talk about whatever they wanted, and they brought up everything from privacy violations to the perils of sarcasm.

For the first few weeks, my volunteers were all girls, and I wrestled with how to get boy buy-in. So when Thomas and Ian said they were feeling uncomfortable that adults may have been discussing them behind their backs instead of addressing them directly, I seized the opportunity. This was something that had come up in student-to-student interactions as well, and I knew that Thomas and Ian could help turn the tide.

I asked them to lead the next student meeting, and they liked the idea. They introduced the topic and tossed out questions. “Why don’t people go straight to the source? What’s the fallout when people hear second-hand that you have a problem with them?”

A few weeks later, they addressed every adult who works in the school. By then, Ian was ready to teach the teachers. “This is part of seventh grade, but also part of life,” he said. “There’s always going to be gossip, and you just have to avoid it as much as possible. And if you have an issue with someone, you just make it into a bigger deal by going to other people.”

Thomas and Ian started the conversation with questions. “What can you do to avoid this situation? If someone is in a position that has more power over you, how can you address it?” They liked the teachers’ ideas. “They suggested bringing a buddy with you if it’s an intimidating encounter,” Thomas said, or rehearsing what you’d like to say ahead of time.

“It was scary, and it felt like all eyes were on us,” Thomas told me. “But in the end it was easier to present to adults than kids, because there was only one time when no one raised their hand.” He noted that he got a good response. “A lot of teachers said how impactful it was, that the teacher can learn from the student, and the person with more power can learn from the person with less power.”

Teacher Laura Merrill backs them up. “The topic they originally brought to the seventh grade is genuinely one I think our faculty should be working on,” she said. “I think one of the ways we bond with each other is by complaining, and the boys really pointed the way toward a more positive way of dealing with problems.”

Other staff members had a similar reaction. “The teachers do such a great job teaching the students who are in the throes of learning these skills, but as adults we can lose sight of that message ourselves,” said advancement manager Wendy Lunde.

Melanie Auerbach, the student support specialist, added that “you know your seventh graders have really internalized a concept when they’re able to teach it to others, especially all the adults in the building.” Brad Bernstein, the middle school principal, echoes that sentiment. “It reinforced that we all learn from each other and it doesn’t have to be top down,” he said.

Merrill noted that the boys’ experience empowered them in a positive social way. “There’s so much peer pressure to be silly or the class clown, to not care about these types of things,” she said. “That’s the stereotypical role of the middle school boy, and this role took them in another direction.”

She also pointed out that when you have positive, powerful male social leaders in the seventh grade, things go a lot better. “We couldn’t get boys to be morning meeting leader, let alone lead their own discussion,” she recalled. “Then there was a nub of a moment when the kids had their own social conflict, and the counselor had them lead their peers in discussion.”

Merrill recommends that other schools be on the lookout for opportunities like this, but to be sure that it feels genuine. “The boys’ presentation to the staff happened organically, when the adults recognized that the dilemma they were talking about was one we face ourselves.”

(The students’ names in this article were replaced with pseudonyms.)