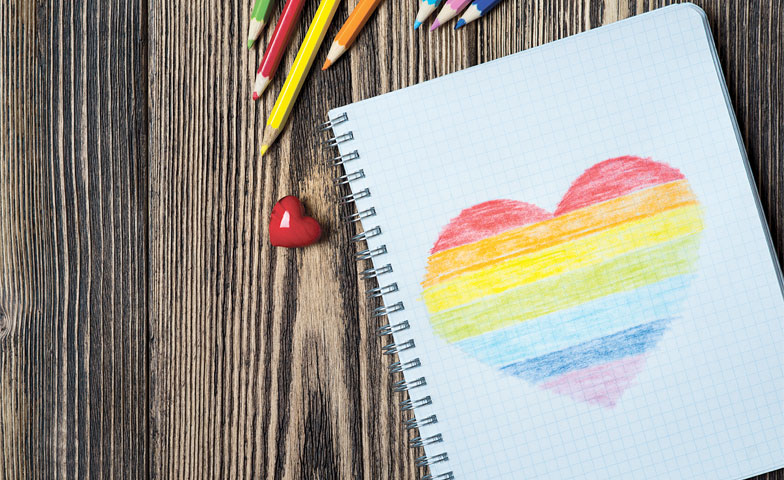 Early adolescence has been identified as a time of great change and transition. Visible physical changes occur at disparate rates and cause many young adolescents to feel uncomfortable about their differences. Young adolescents are also exploring self and social boundaries. For gay and lesbian youth, suicide is one of the leading causes of death in the United States. According to the Gay, Lesbian, and Straight Education Network’s (GLSEN) 2013 national school climate survey, 85% of the surveyed lesbian, gay, bisexual, and transgender (LGBT) youth reported verbal harassment at school, and 56% reported feeling unsafe at school. School supports, such as a LGBT inclusive curricula, can help create a safer space for LGBT youth (see http://www. glsen.org/article/2013-nationalschool-climate-survey).

An issue relatively unique to LGBT youth is the feeling of isolation. Many LGBT youth are fearful of being “outed” and rejected and often must keep their feelings, questions, and fears bottled up inside. For isolated LGBT youth, books mirroring their real-life struggles and challenges are of paramount importance. Middle school teachers, by including LGBT literature in their curriculum, could begin a critical conversation.

AMLE and Otterbein U Talk about LGBT Literature in Middle Grades

One appropriate choice would be the book, So Hard to Say (2004) by Alex Sanchez. The protagonist in the book is Frederick, who is questioning his sexual identity because of his growing attraction to another boy. Two key characters in the book become positive role models for acceptance, as they grapple with what it means to be a true friend to Frederick as he navigates his new feelings. As part of the Collegiate Middle Level Association (CMLA) 2016 spring conference, we were fortunate to have author Alex Sanchez come to our Otterbein University campus to speak, and our CMLA students read So Hard to Say to prepare for his visit.

The purpose of this article is to share our analysis of So Hard to Say; the intriguing aspect is that the analysis was done by college students majoring in middle childhood education who read the book, reflected on their recent middle school experiences, and then projected forward to their future roles as middle school teachers.

Can a Book Make a Difference? Thoughts from Future Middle School Teachers

Friends can push your thinking. One of the authors reflected about her high school experience: I had one friend in high school who came out as gay his senior year. He was so worried about telling me because he was afraid I would not act the same way around him or that my opinion would change about him. At the time, this astonished me and, still today, it makes me angry, but the anger was not directed at my friend, I was angry for him. I did not understand why I would possibly treat him differently because, to me, he was still the same person, my best friend.

As I reflect on all of this today, I realize just how much this says about the society in which I grew up. It has created such a negative stigma around LGBT issues that our youth grow up thinking that even those closest to them will turn against them if they know the truth. That is why I believe novels like Alex Sanchez’s So Hard to Say are important and necessary in middle schools. Not only does it help LGBT youth see that there are others who understand what they are experiencing, but it creates a window for others so that an understanding can be created and acceptance can be achieved. The longer we keep these individuals underrepresented in literature, in society, and in schools, the longer we promote the idea that intolerance is okay. Maybe if my friend had novels like Alex Sanchez’s in middle school, he would not have been so afraid to be himself in high school.

Learning how to take a stand. Reflecting on his middle school experience, one of the authors wrote: I remember in my middle school how hard it was to be that brave person that would stand up to defend another peer (even a friend) who was being ridiculed. I can identify with Frederick in that way. He was too scared to put a stop to the kids making fun of Iggy even though the whole time he knew it was wrong. I can relate to this feeling. I knew that it was not okay to allow students to bully other peers, but I was always too scared to stand up and say anything. This is where the real problem lies; students at this age are so scared to fall out of social acceptance that they will simply watch something happen that they know is wrong.

Developing empathy. Wondering how she could have been so “oblivious” in middle school, a different author shared: When I read this book I realized how sheltered I was growing up. For some students, this book may act as a mirror, something they can relate to and see within themselves. But for others, like myself, So Hard to Say would have created the necessary window that I so desperately needed to better understand others. A window that could have not only educated me, but given me the tools to truly make a difference in someone’s life. If we wish for middle school to be a time when students are able to find out who they truly are, then we need to provide them with the opportunities to do so. Those opportunities can only be given if they are aware of the entire world around them.

Seeking guidance. One author wrote about how the characters in So Hard to Say can provide direction: In my future classroom, I would include books like Alex Sanchez’s So Hard to Say because middle school can be a tough time for students and they may need guidance. They are hoping that someone will be there for them and give them the tools to discover who they truly are. Often times, teachers are not fully prepared for those students who are struggling with their gender or sexual identity. They do not know what to say or do if a student opens up to them or tells them that they are curious about exploring these topics. That is why it is important to have these types of novels because those closest to them might not know how to give them guidance, but the characters in So Hard to Say do provide this support.

Literature allows the reader an insider view to a different perspective, a chance to truly “walk a mile” in someone else’s shoes. So Hard to Say could start a powerful and transformative conversation in a middle school
classroom. The book could help young adolescents who are struggling with their identity formation; it could provide support and a comforting assurance that they are not alone. Moreover, experiences based on reading the book could spark personal introspection among the middle schoolers that might result in building acceptance for differences.

One powerful scene near the end of the book comes when Iggy—who has been taunted and bullied because of gender nonconformity since elementary school—shares this sentiment: “‘Think about it,’ Iggy said firmly. ‘People have been picking on me ever since grade school— making fun of how I talk or walk—before I even knew what gay meant. I used to come home crying every day because of them. And they have the nerve to tell me I’m bad?'” (p. 199).

It is important to note that LGBT–themed books can impact all students, regardless of their sexual identity. In his keynote address, Alex Sanchez shared this email from a high school girl: “Dear Mr. Sanchez: When I was done with the book I had a whole new outlook on anyone who is gay … So I would like to thank you so much for writing your books. Thank you for giving me a whole new pair of eyes.” We implore middle school teachers to read and discuss books such as So Hard to Say with students. Let’s start the conversation and work to give young adolescents “a whole new pair of eyes.”