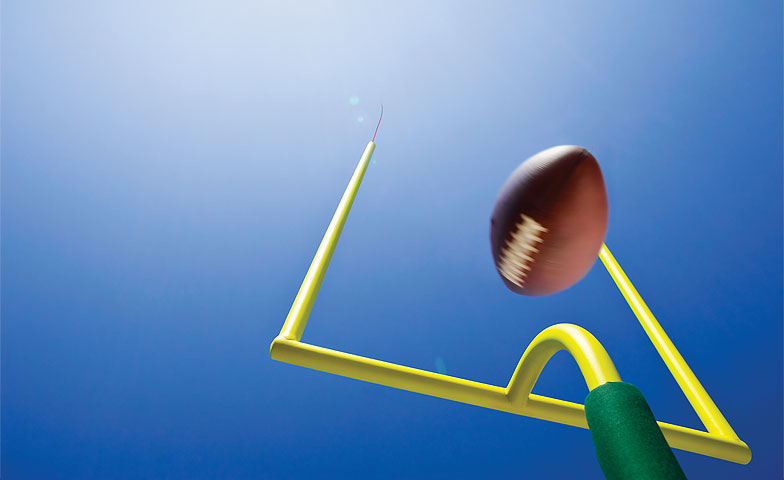 Making connections with sports in the middle school classroom

When I taught middle school language arts, one of my students, Matthew, would complain that he was not able to give an explanation about or summarize the poems we were reading in class. However, every Monday he would spend the first part of class talking to friends about the NFL Sunday games. He would discuss the stats, the running backs, how the quarterback was reading the plays, the names of the plays being called, and then compare the teams in the league.

As I listened to Matthew’s dialogue, I realized he indeed had the skills for my language arts class (i.e., analyze, summarize, explain) but only used them in relation to NFL games. I knew that a connection had to be made between Matthew’s football-talking skills and the ones needed in my classroom.

Over the next few months, I began to connect the language and strategic thinking of sports to the academic language and strategic thinking of the curriculum. In making these connections, I helped make the learning environment inclusive and purposeful for Matthew and other students who shared his literacy skill set. To be inclusive of Matthew’s interests, I needed to go beyond just including sports texts in my classroom; I needed to focus on the literacy skills and strategies at which my sports-minded students were already experts.

All teachers know the importance of connecting our students’ personal lives to the content we are teaching to make the learning relevant and personal. Many students consider themselves an athlete or a fan of a sports team, so sports is one way to link students’ lives to content area classrooms. Vocabulary, analysis, and evidence are three overarching parallels between students’ sports metacognitive thinking and learning in the middle school classroom. These three connections offer the opportunity for a natural and organic dialogue to help students build on their strengths and make personal connections to classroom learning.

A cornerstone of any middle school classroom curriculum is the vocabulary that students need to know. The hallmark of vocabulary mastery is when students are able to use the words regularly and own them. One way for students to achieve this mastery is to put word meanings into their own words. Importantly, students would be doing the same thing if they were discussing sports to someone who has never played it.

I would have Matthew explain something about football to one of his classmates who had no idea about the sport. He would use the discourse of the sport to explain a concept in plain, everyday terms. For example, he explained that a field goal is when a ball is kicked through two posts at the end of the field (end zone), and if it makes it through the posts, then that team adds points to the score of the game. The vital next instructional step was to discuss with Matthew that he could do the very same thing when he was learning new content vocabulary.

For example, in history, a student who is learning about ancient civilizations might try explaining Mesopotamia to someone who has never heard about it. “A long time ago this area was home to many civilizations because it was easy to grow food near two rivers” is much easier to remember than “a geographic area between the Tigris and Euphrates rivers that was home to many ancient civilizations due to its fertile land.” The practice of explaining technical/discipline-specific terms in plain language helps students learn the content because they are able to make it their own while using a skill set they already have.

Matthew was able to watch a football game and use his metacognitive strategies to analyze what happened, how it happened, and what needed to be done to improve the plays the next time. This We Believe further states educators should use multiple learning and teaching approaches (NMSA, 2010) to ensure that students are challenged and learn from different angles. Hence, challenging students to use their metacognitive strategies comfortably to analyze the football game to then do a similar analysis in the classroom meets AMLE’s call to approach the content from multiple angles.

In many ways, when analyzing a play or game, cause and effect analysis is being used by breaking down multiple steps based on knowledge of the rules of the game. This cause-effect analysis is a skill valued in any content area. For example, in science, students are often asked to analyze different processes, multiple steps, and relationships based on knowledge of scientific principles. Using their knowledge of air pressure, students can analyze a weather system as a series of cause and effect steps. Similarly, based on the basketball rules of two-point and three-point shots, a basketball play can be analyzed into cause and effect steps. Through an authentic dialogue a teacher can build students’ ability to meta-cognitively analyze sports into confidence in their analysis skills in the middle school curriculum.

By using this technique, Matthew was able to recognize that being able to analyze is a skill that is evident in life, both in and out of school, and what he does in one part of his life is valued in another.

Students frequently reach a conclusion or state an opinion but struggle to support the why or how with evidence. However, in sports, students often support their choices of players or back up a claim about a sport they watch. When a teacher is able to show a student that he or she is able to support their claims and opinions in sports, and that this skill is valuable in the classroom, a teacher is following a characteristic of This We Believe … that educators value young adolescents and are prepared to teach them (NMSA, 2010).

Matthew was a great example of this evidence-based argument skill set. After his favorite NFL team lost, Matthew was able to discuss the reasons his team lost (i.e., referee calls, missed field goals, turnovers that resulted in touchdowns for the other team). This ability to use evidence to support a conclusion is exactly the evidence-based argument that we want our students to make in our classroom. Matthew could not simply state there were bad calls in the game, but instead he needed to explain why the bad calls were made and what the results of the bad calls were. The same principle applies when making an argument in the classroom.

For example, in the language arts classroom, a student must be able to support a claim about why a character acted in a certain way or why an author chose a particular point of view. Supporting a claim is often done by comparing and contrasting evidence from multiple sources and using textual evidence. A teacher can build from students’ evidence-based argument skills deftly used in sports to enhance the same evidence-based argument in the classroom.

By the end of the year, Matthew was able to use his sports skills in the classroom and do so without having to be reminded or made aware of the connection. I delighted in seeing Matthew realize his potential but also recognize that his football skills were applicable for and valued in the classroom. As teachers, we must remember that sports are not a classroom distraction but rather represent positive skill sets many students can use. If we are able to reach the disconnect between sports and academics early in a child’s life by seeing our students’ sports-minded skills as transferrable, we have the opportunity to close this gap and see successful students in all classrooms.