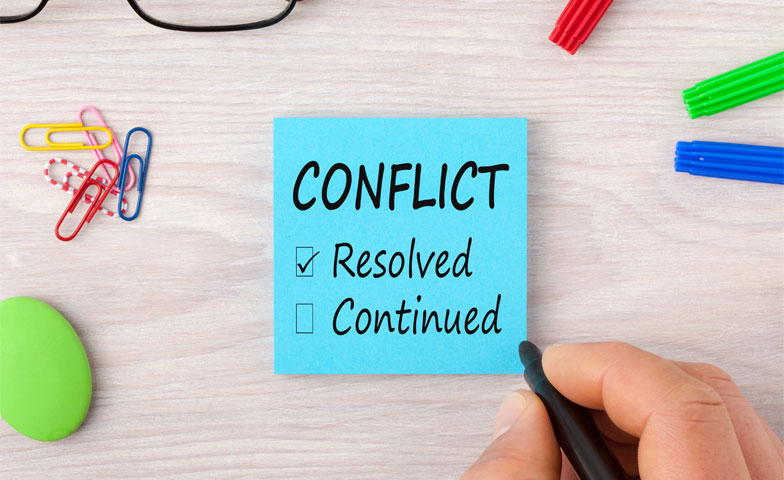 Are you ready? It’s coming. That inevitable confrontation. It’s coming and you know it. You versus them. Head to head. Will you have time to lace up or will it be too late? You play it out in your mind: POW! They strike first. You duck and grapple to find your footing. You begin scrutinizing their every move. Almost ready. All you need is one good strike and they are down. That inevitable confrontation. It’s coming. Nothing can stop it now. Waking or sleeping, it’s on your mind. Are you ready? The day of confrontation is almost here. Every middle school teacher in the trenches faces it.

Wait a minute! Hold it! I bet you think we were talking about confronting students, didn’t you? No, this is worse; confronting colleagues.

There are millions of resources available on classroom management, yet how do we handle conflicts with our peers in the middle school? When aids or paraprofessionals are not doing what they should be, how do we address it? What do we do when we feel like our administrator isn’t treating us fairly? Or worse, how should we respond when confronted? How do we prepare?

Unless you are a Type A personality or a “take charge” person, you, like most people, probably dislike or avoid conflict. Avoidance or passive aggressive attempts to address issues can lead to misunderstanding, hurt feelings, and may ultimately create resentment. Confronting problems can be intimidating and stressful. However, addressing problems early can lead to healthier living, stronger working relationships, and will contribute to building a culture of collaboration.

Their stories and wisdom have been inspirational. Modifying their principles of nonviolence for conflict resolution has become my foundation for handling conflicts in my career as a middle school teacher. They are as follows:

Using these principles as a foundation has helped me navigate many difficult situations. Here are some brief, real-life examples.

This year I was caught off guard by one of my fellow middle school teachers. One day before school “Bob” came to my classroom and accused me of making him look like a jerk (not his word of choice). The day before we both responded to a group email in which I had respectfully disagreed with him (at least from my perspective). I didn’t think anything of it, yet here he was visibly upset. My first reaction was to defend my actions. This wasn’t helping. He was still upset. Pausing to take a breath, I reminded myself that Bob wasn’t an opponent to defeat or conquer. I asked myself, “How do I restore the relationship?” Answer – apologize. I apologized for how I made him feel. I didn’t (and still don’t) think I did anything wrong. Unintentionally, though, I did make him feel like a jerk. After apologizing, I assured him of my intentions and reassured him of what I actually thought about him. We shook hands and peacefully parted ways. We haven’t had any issues since.

I spoke with a trusted counselor who would tell me truthfully if I had been inappropriate or wrong in the e-mail exchange. This person didn’t see any issue with what I had written. Yet, it wasn’t about me being right or wrong; it was about finding redemption for the sake of the relationship.

Early in my career I was assigned to co-teach with several people, which would involve co-teaching with two separate people during the same hour; not a recipe for success! We agreed I would spend 25 minutes in each classroom. One day I arrived in “Missy’s” room and was told I wasn’t needed since a counselor agreed to help that day. This happened three days in a row without any explanation. After emailing and calling her without a response, I went to her classroom to ask what was going on. She informed me that she had been talking to the counselor, and they agreed to work together that hour. This meant I was free to work with the other co-teacher for the entire period. As a young teacher, I thought it strange that she hadn’t told me sooner. However, I did not want to make a big deal over her lack of communication, and I happily went along with the new structure. In fact, I was relieved to not have to bounce between rooms.

Then in late January I received an email that had our school’s administrators, counselors, and a few others attached to it. Missy was venting about our “pseudo” co-taught class. Now, I was mad! My mind was immediately flooded with every wrong I had experienced by her lack of communication and the disregard she demonstrated by making arrangements without my input or consent. I was also ticked off because I was embarrassed. I felt like my reputation was on the line. In my anger, I drafted several emails, which I promptly deleted. I had to because I was lashing out. Our first reactions are sometimes the worst, and mine was defensive in nature. I chose instead to walk away, chill out, and wait until I was able to reply calmly. When I did respond, I respectfully asked if the prior arrangements were still occurring and invited her to talk. (Truth be told this question was asked for the sake of self-preservation. I wanted the others to know the backstory. I am not proud of this moment.) After school I went to her and shared that I noticed she was upset and asked what was going on. I gave her time to vent about the counselor no longer coming to the class and about other drama that was occurring. I gave her time, and I listened.

Now it was my time to confront, though not about the email and how it made me feel. I needed to confront her lack of communication, making changes without discussing them with me, and waiting to communicate her needs until she was overwhelmed. I calmly told her my concerns about the times when she didn’t share with me. I went on to clarify that I wanted to support her. To top it off, I reinforced this by telling her what an amazing teacher she was (which is true). She ended up being the one to apologize. The two co-teachers and I got together and figured out a better schedule so everyone’s needs were met. That was a rough year because the situation we were handed was far from ideal.

In both incidents I avoided accusing the other party. Defending my actions wasn’t productive because it didn’t acknowledge how the other person felt. Giving others the opportunity to share and actively listening are simple demonstrations of respect, which helps to disarm people who are agitated. I don’t like being confronted, and I don’t like confronting, but by using self-control and staying calm, my presence brought peace instead of frustration. In the end, both people in my situations left feeling better about the issue at hand because they left feeling validated.

When facing confrontational challenges, I encourage you to find one or two experienced individuals whom you can trust to give honest feedback. It is best if they aren’t in your immediate circle of colleagues so they can be impartial. They will be invaluable in providing counsel to positively navigate these kinds of situations.

Finally, while there are many situations we face that we should take care of without burdening our administrators, there are some issues that should be reported immediately. Situations involving ethical, sexual, or physical harassment, or the safety of others should be reported to an administrator. It may feel intimidating at first, but the more you face necessary confrontations head on with honesty, respect, and a willingness to listen, the stronger, healthier, and more productive your work relationships will be!