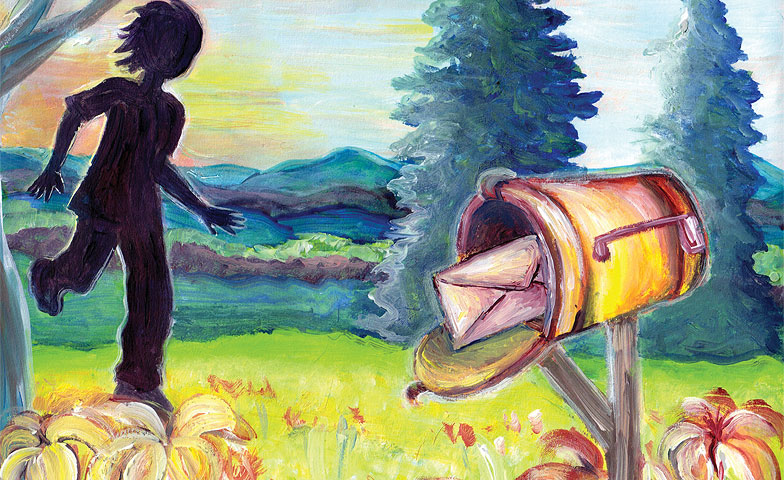 On the last day of school for the past six years, after hiking a small mountain near our school in Vermont, we gather in the shade of venerable maples for a final ceremony with the eighth grade class. After each eighth grade team member reflects briefly on the year, we make a transition to an aspect of the day that students have anticipated for months: The Letter Writing Project. Following reminders about the goals of the project and hopes for how students will read and care for their letters, team members call the names of students and hand each a postcard revealing the name of the middle school staff member who has written them a personal letter. The letters will be mailed the next day, after the students have piled on the school buses one last time and officially started summer.

In a world of personal electronic devices and constant connectivity, The Letter Writing Project honors the old-fashioned tradition of letter writing. The eighth grade team of Woodstock Union Middle School developed this project to provide a more meaningful culminating experience for our middle school students as they transition to high school. The team concluded that a brief “step-up” event and an end-of-year trip, which had served as the culmination of middle school for many years, did not bring the year to a satisfactory close.

As the eighth grade team reflected on the shortcomings of our middle school send-off, and shared ideas for how we might revamp and enhance this important time for our students, we identified two main objectives for any new end-of-year projects or activities: to recognize and honor connections students had to the middle school and to send students on to high school with well wishes and friendly advice. As a result of these discussions, the eighth grade team designed The Letter Writing Project.

From Idea to Reality

It was clear from the outset that for each student to receive a personal letter the project would need to involve the collective strength of the entire staff, not just the eighth grade team. Thus, as a first step, the team pitched the idea to staff members during a monthly meeting. While some voiced initial concerns about the time the project would require, most staff members were supportive and interested in participating. Convinced that we had sufficient buy-in, the eighth grade team decided to move into the implementation phase, which included having an art teacher design a logo for the project.

The steps involved in successfully carrying out this project have remained consistent over the course of its five-year history. Typically, the project is initiated each January at a staff meeting and, shortly thereafter, the first and most labor-intensive step of pairing students with letter writers begins. In our case, the process of securing a writer for each eighth grade student has been undertaken by two project coordinators. These point-people engage in individual conversations with letter writers and maintain a master list of pairings. Writers consider numerous factors, including their relationships with students to whom they are considering writing and the time they anticipate spending on their letters. Although staff members typically only write two or three letters, it is often helpful for them to identify more students to whom they would feel comfortable writing so that the process of matching can proceed more quickly.

Following the successful pairing of each student and writer, the project coordinators send a document to each writer reminding them of important details related to focus and format. Letter writers are encouraged to include their reflections about the student’s strengths; observations about the student’s academic, athletic, or personal growth; recollections of shared experiences; and hopes and well wishes for the student. Letter writers may either handwrite their letters or type them on a computer. As names of individual letter writers are not unveiled until the last day of school, writers are also reminded that they should not reveal to whom they are writing—however tempting! Between the time the project is presented to the staff in January and the time letters are due in June, the coordinators field questions, send periodic reminders about deadlines, and troubleshoot any problems.

As letters are turned in, it is important to have a system for their organization and safekeeping. In our case, our middle school administrative assistant fills this role. She copies each letter onto the project letterhead and then has the writer sign it. Before the letters are mailed, each completed letter is copied and placed in a plastic sleeve in a binder in case a letter goes astray in the mail and needs to be re-sent. These binders—one for each eighth grade class from the past five years—are archived in our middle school office. The letters themselves, along with a class photograph taken on our end-of-year hike, are mailed in envelopes that have been hand-addressed in calligraphy by one of our team members.

Through several surveys, we have learned that our students feel very positive about the letters they receive and the project as a whole. Students seem to appreciate the build up that surrounds the project, expressing that they feel excitement when their letters finally arrive in their mailboxes. Many students have told us in these surveys—as well as in person and via emails or thank-you notes—that they are touched by the thoughtful and personal nature of their letters. Students express appreciation for how their writers noticed and commented on their strengths; often students report how valued the letters make them feel. In survey responses, students shared that the letters made them feel “proud,” “flattered,” “appreciated,” “happy,” “inspired,” “special,” and “understood.”

While we are delighted that this parting experience leaves so many of our students feeling validated and supported, they are not the only ones who benefit from this project. Commenting on the positive impact the project has had on the adults in the building, Woodstock Union Middle School Principal Dana Peterson noted, “It seems that the faculty and staff have really appreciated the opportunity that this project presents. I know that I have heard numerous letter writers comment on how this project has impacted them, helping them to see students more clearly and fully, think about their teaching in new ways, and feel more connected to the students to whom they have written.”

Alyssa Smith, one of our physical education and health teachers who has participated in the project commented recently, “When you are writing to a student, you become much more aware of their actions around school and start reaching out to get to know them on a different level.” Smith further noted, “The transition to high school can be an intimidating time, and I don’t doubt some students crave reassurance from their teachers of their talents and potential as they move forward. I think there is something special about an old-fashioned letter, it carries much more meaning.”

Parents have commented as well. One parent wrote in an email, “To say we were touched, moved, and grateful for the thought, time, and effort you put into creating the letter does not even seem to skim the surface of how we felt reading it.” Another commented, “My daughter had tears streaming down her face after reading the wonderful letter written to her. Thank you for doing this.”

When the eighth grade team proposed The Letter Writing Project, we did so to better acknowledge our students and the important transition they experience as they leave middle school and enter high school. The idea of each student receiving a letter from a caring adult that would be delivered to their mailbox, opened and read, and then tucked away to be re-read and shared at some point in the distant future seemed idyllically sweet and old-fashioned, as well as completely achievable.

The Letter Writing Project has, for the past five years, helped us bring a much more satisfying close to our students’ middle school experience. There have been other unanticipated outcomes as well, including the positive impact the project has had on faculty members and school culture in general. The five binders in the office of Woodstock Union Middle School that contain copies of the 388 letters that have been sent as part of The Letter Writing Project stand as a testament to the project’s strength. Each binder serves as a unique portrait of a particular eighth grade class as well as the staff they interacted with during their time in the middle school. They capture a positive and powerful collective perspective that grows with each passing year. In such a fast-paced, digital world we hope this project offers a tangible reminder of the power of the physical, as well as an experience that may one day lead our students to write thoughtful personal letters of their own.