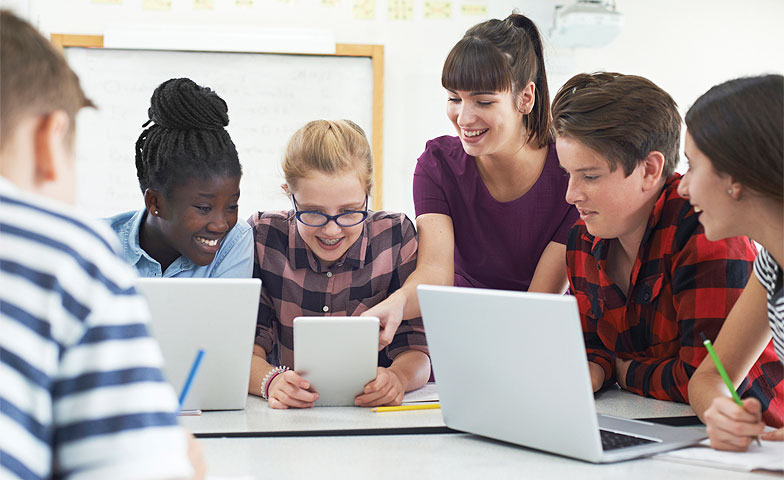 Aiden, an eighth grader, wanted to vent about his latest group project. He had to work with classmates to design an environmentally sustainable home in Vietnam. This involved sourcing local palm thatching and bamboo, understanding the local culture, and calculating measurements. “I’m sure I’ll do the whole thing,” he told me, sounding both exasperated and a little proud. “I’m the only one who gets stuff done.” I knew Aiden was missing the point of collaboration, and I challenged him to come up with three reasons to loosen control. He looked confused. “Why would I want to do that?” he asked. “I’ll get a bad grade.”

We worry about students who don’t pull their weight, but kids who dominate groups lose out too. They don’t develop the skills they’ll need for a workforce that increasingly values diversity of thought. Companies such as Google know that the loudest voice in the room can impede innovation, and they’ve been outspoken about their desire to attract people with intellectual humility. The employees who focus on success at all costs often struggle to embrace others’ ideas when they’re better. As schools incorporate more inquiry-based learning and group work, we can take advantage of opportunities to bolster students’ ability to read cues and accept feedback, take risks, and exchange ideas.

“The job of schooling isn’t just preparing kids for college,” says Scott Murphy, a director of secondary curriculum and districtwide programs for Montgomery County Public Schools in Maryland. “It’s preparing them to have a vibrant career, to work with people from diverse backgrounds, and to communicate and collaborate.” “These soft skills can’t be ‘taught’ in the traditional sense,” says Tyler Gehrking, a teacher and host of the DisruptED Podcast. “It’s chaotic sometimes, and while my natural urge as a teacher is to save them, it’s the one thing I can’t do,” he says. “When you rob students of the struggle, you rob them of the learning.” As Murphy adds, “problem-based learning is not the teacher at the front of the room sharing their brilliance—it’s teacher as facilitator.” Here are four ways educators can help students collaborate productively.

Teach Them to Use Language Differently

Kids are being thrown together without being taught to communicate, says Jeanine Esposito, the managing director and founder of Innovation Builders in Connecticut, an innovation firm for learning institutions. “There’s a language,” she explains. Teach them to avoid responding to peers’ thoughts with a binary yes or no, and to embrace all ideas by saying “yes, and” instead of “yes, but.” “When you say ‘yes, but,’ you’ve already decided there’s something wrong with what the person has already said,” Esposito explains. Show them how to ask provocative questions that prompt deeper thinking about a problem. “A magic question is, ‘what would have to be true?'” she says. “We’re always guessing at what people need by asking what’s wrong.” For Aiden’s group, the question might be, “What would have to be true for us to convince families in Vietnam that we’ve designed the perfect sustainable home?”

To further spur creativity, use sentence starters, such as, “Wouldn’t it be amazing if,” or “I wish.” You also can try the worst idea exercise. Prompt kids to throw out the worst ideas they can think of, then ask them how they could make them work. The more impossible and absurd the suggestion, the better. “Once you have the worst idea for whatever it is you’re trying to solve, take a fresh sheet of paper and come up with two good things about that worst possible solution,” Esposito says. Use sticky notes to make it fun, and use anonymity to make risk-taking safe. Students can scrawl dozens of ideas on stickies, tack them to a wall as they brainstorm, then sift through them for workable and inspired ideas.

Focus on Process, not Product

If you want to teach collaboration, emphasize process over product. Otherwise, kids will be driven by the desire for a good grade. Start by administering a strengths and weaknesses analysis such as the Compass Points Activity (see link in Resources at the end of this article). Ask students to discuss what different personality types bring to the table, and what they might need in a group member to balance themselves out. Then have them pair with people who aren’t just like them. “Teachers need to be thoughtful about the composition of groups and assign roles thoughtfully,” says Susan Cain, author and founder of Quiet Revolution. “It’s putting structures in place so it doesn’t become ‘Lord of the Flies.’ Make kids conscious of dynamics and tell them when they need to make adjustments,” she adds.

As the project gets underway, use informal peer evaluations to ensure kids notice and shift gears when they’re acting too domineering or too hands-off. Make fairly evaluating each other part of the grading process. “If you want me to give my teammates more autonomy, I need to know I won’t be penalized if they do something wrong,” says Roxanne Moore, a professor at Georgia Tech who has written engineering curriculum for middle school students. “A lot of that is in the grading. If we grade the product and not the process, then our incentives aren’t aligned. If we’re grading the process more heavily, that changes the incentives entirely. Then the high-achieving kid realizes, ‘I have to work with my teammates, and if I don’t do the poster myself, it’s not going to sink my grade.'”

Build in Time for Feedback and Reflection

Have kids journal throughout the group project. What bugged them? When and why did they clash with teammates? What strengths and weaknesses did the other students bring to the project? What tendencies did they identify in themselves? Where did they fail? How did they regroup after a setback? Were they attentive to the cues around them, or did they have no idea they were turning people off until they saw the written comments? How did working in a group help the end result?

Teach kids the habit of mind of being curious about other people and listening to what they have to say nonjudgmentally, Cain says. “Teach them to ask the question ‘why.’ ‘Why do you feel that way? Where are you coming from?'” Build in time along the way for self-reflection and self-awareness in the context of the group collaboration. You can have students share their observations with the class or keep them private. Either way, the idea is to learn from their self-assessment and others’ feedback, and to apply those findings to future group experiences.

“We have to model that none of us have all the answers, and draw from other people’s input to become smarter, wiser, and more adaptive than we would have been on our own,” says Dr. Ken Ginsburg, a pediatrician and founder of the Center for Parent and Teen Communication at Children’s Hospital of Philadelphia. “The example I give is, I think red, and I’d never think purple by myself. But if I’m with someone who thinks blue, together we can think purple. That’s how innovation occurs, when we can really take constructive criticism.”

Define Leadership as Doing What Needs to be Done, Not Taking Charge

Children (and many adults) tend to think of leadership in the conventional sense, as the soccer team captain or the student body president. Make a point of reframing leadership as making an impact or shaping the lives around you, Cain says. “When you define it that way, you leave a lot more room for broader forms of leadership.”

On teams, both alpha and more introverted kids can make real contributions, but non-alpha kids often need to be told their way of being is equally potent. Use real-life examples. As Cain notes, “Ghandi was not sociable, but we see him as a transformational leader because of his conviction and dedication, which attracts others to his cause and becomes very powerful in its own right. You can see him handling conflict in a roundabout way—he wasn’t bull by the horns. He instinctively looked for less overly conflictual ways of handling things.” Underscore that effective teams are comprised of individuals with different temperaments.

Keep in mind that group projects aren’t a cure-all, and there can be a downside. “Extroverts need to learn the skill of deliberate practice, of sitting and working on something themselves. Introverts need freedom—they’re hungry to do their own thing,” Cain explains. One way to address this limitation is by taking a hybrid approach. Before students start collaborating, build in time for individual brainstorming. “One of my favorite teaching methods is ‘think, pair, share,'” she says. “Teachers throw out a question, kids first think privately themselves, then discuss with a partner, then the pairs share out with a group. These little tweaks can go a long way.” With creativity and intentionality, we can ensure that all group members are engaged and working on their individual growth edges.