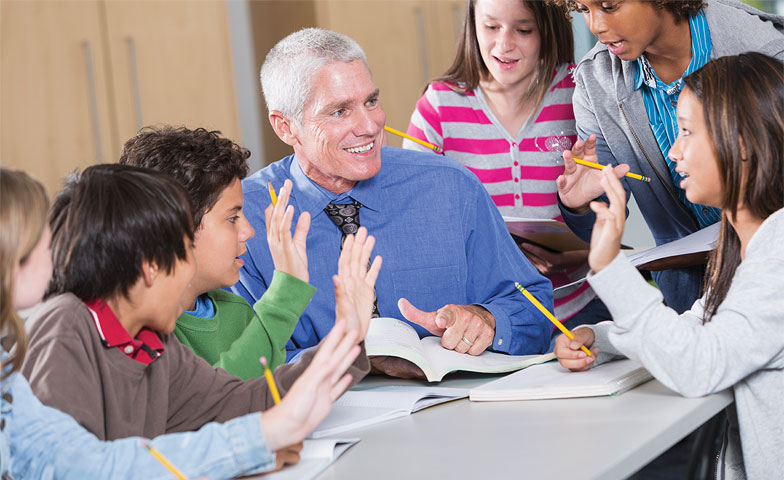 Gena was failing most of her sixth grade classes when she decided to stop going to school. Her mother, Sheryl, called me in a panic. I hadn’t talked to Sheryl in years, but we’d grown up together, and she knew I was a school counselor and psychotherapist. “I know I’m calling you out of the blue,” she said, “but I don’t know what to do. Gena doesn’t seem unhappy, and she’s a capable student with plenty of friends. Would you talk to her?”

As soon as I met Gena, I understood why Sheryl was bewildered. Gena came across as likeable, smart, and even-keeled. She made wry, spot-on observations about middle school drama and excitedly shared her love of baking and ice skating. “Your mom thinks very highly of you,” I told her. “She wants to help you, but she’s having a hard time figuring out what’s getting in your way. I’m guessing this situation isn’t ideal for you, either.” Gena conceded that she felt stuck and confused.

As we talked, I pieced together her story. Gena had been an A student through fifth grade, but found the middle school transition disruptive. She’d been tight with elementary school staff, but barely knew her sixth grade teachers. Academic expectations were higher, and her grades dropped precipitously, which rocked her self-concept.

She’d also been designated the emotional anchor for her friends. New and old friends pinged her around the clock for help with unrequited crushes, perceived slights, lopsided friendships, and spilled secrets. Her classmates were drawn to her steadiness, but there was one problem—it was all a facade. None of her teachers knew her well enough to see the cracks, or to understand that her grades didn’t reflect her ability.

Gena’s decision to shut down was maladaptive, but it made sense. She could preserve her perception of herself as an A student and get relief from her friends’ neediness. I told Sheryl that avoidance exacerbates anxiety and recommended that Gena start seeing a therapist and get back in school as quickly as possible. I also suggested that Sheryl contact the school counselor for help.

The middle school transition can be tough. Just when tweens most crave connection, they encounter a rotating cast of teachers and peers. Here are four evidence-based ways to give them back a sense of agency and belonging.

More schools are experimenting with organizational structure, including Argyle and White Oak Middle Schools in Montgomery County, Maryland, which implemented a program called Project SUCCESS. Select sixth graders can spend half of their instructional time with the same teacher and an intact peer group.

“As teachers become specialized, relationships begin to suffer,” notes Dr. Robert Dodd, the principal of Walt Whitman High School in Maryland, who founded the program after several years as a middle school principal. “Some students start to think teachers care more about their grades than their learning and become progressively disengaged from school,” he explains. “In some instances, teachers don’t trust students as much, and students don’t feel their teachers care as much as they did in elementary school.” Project SUCCESS data show that when schools create stronger cohorts, kids feel better and achieve more.

Casey Siddons, who taught in Project SUCCESS for three years before becoming a consulting teacher, attributes its success to a number of factors. “We went into the program with the idea that we would actively foster a familial type of learning atmosphere,” he says, adding that he used morning meetings, class climate surveys, and online “issue bins” to give kids a way to share their concerns. He also regularly let students choose what and how they learned.

Teach kids the skills they need to be resilient.

Resilient kids do better academically, socially, and behaviorally, especially during the middle school transition. In response, some schools are using their own staff or bringing in outside professionals to teach students self-regulation, problem-solving, and social skills.

Psychologist Mary Alvord created the Resilience Builder Program, a group curriculum that uses role playing and games to teach tweens to take initiative rather than act out or wallow in negativity. If a child is struggling with homework, for example, instructors encourage perspective and proactivity. They might ask, “Were you reading chapter books in kindergarten? What steps can you take to learn the material?” If a child has interpersonal difficulties, they’ll say, ‘What can you do? Let’s look at your impact on other people and really examine what others are perceiving.'” Alvord’s data show that giving kids a sense of control changes their outcome.

“More and more, kids are feeling like they’re victims of fate,” says Dr. Peter Gray, a research professor at Boston College and the author of Free to Learn: Why Unleashing the Instinct to Play Will Make our Children Happier, More Self-Reliant, and Better Students for Life. Gray attributes middle schoolers’ increase in mental health disorders to the rise in testing and decrease in recess. To help schools turn the tide, he co-founded the Let Grow Foundation.

Michael Hynes, superintendent of the Patchogue Medford School District, now offers middle school students one hour of self-directed play before the start of the school day. “It’s the closest thing I’ve seen to a silver bullet in my 20-plus years serving children in education,” he says. “Kids are less anxious, depressed, and upset. It’s time our school leaders understand the undeniable research that supports this fact.” When kids do engage in free play, Gray urges teachers to act “like lifeguards on the beach.” As he explains, “Play is one area where kids can learn to negotiate with other children, but it’s all ruined when adults are doing it for them.”

Schools can incorporate community circles to improve overall school culture and heighten kids’ sense of belonging. To create a safe, nonjudgmental space, everyone sits in a circle and contributes equally to

Community circles can be used to nurture healthy relationships among staff and students. When care starts at the top, it permeates the building. Traci Townsend, the principal of Silver Creek Middle School in Bethesda, Maryland, explains that care is contagious. “When you feel care from your colleagues, you pass that on to the kids,” she says. “We have a teacher who will come down, buy lunch, and choose random kids to eat with twice a week. That’s care.”

As for Gena, she agreed to see a therapist, who helped her set realistic expectations and establish firmer boundaries with friends. Gena’s counselor also convened a team meeting so everyone could problem-solve collaboratively. Afterward, her teachers started inviting Gena to lunch and inquiring about her well-being. “Those small changes had a huge impact,” Sheryl told me. “Now, Gena believes that her teachers know her and like her. When she feels like she’s losing perspective, she just talks to them instead of hiding out at home.”