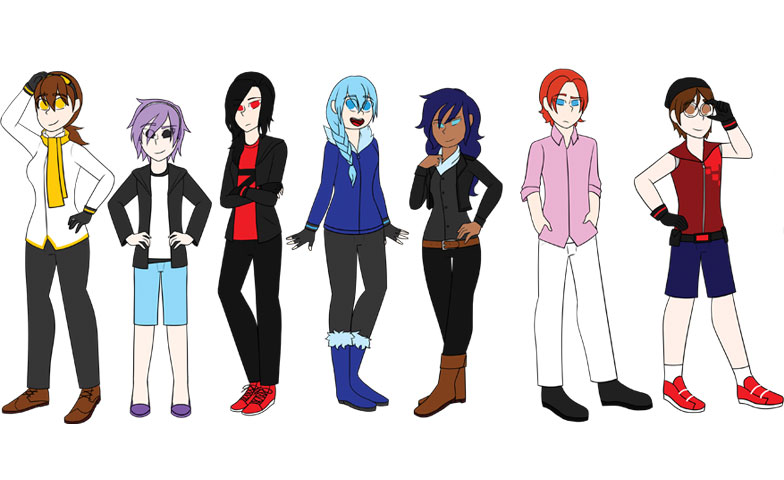 Examples of web comics and the implications to student readers

Some teachers may suggest that no text can replace the classics, the perennial list of books that English teachers seem to love and endearingly pass on to students year after year. However, the list of what belongs in the canon is in perpetual debate as “new classics” are discovered. Do we add Suzanne Collins? What about Walk Two Moons? Does Neil Gaiman make the cut?

Adding some mud to the waters of what makes a worthy text, online and picture-based reading offers a wide range of options. Web communities gather around fanfiction, as well as other topics of interest. Social media continues to be explored by students and teachers. Other students read comics fanatically, and still others participate in Live Action Role Playing (LARPing) and actually act out the events of stories they enjoy.

PitchBlank Comics defines graphic novels as “extended comics with limitless possibilities which have been steadily growing in popularity inspiring TV shows and movies.” Comic book creator Scott McCloud in his book, Understanding Comics, makes the case that graphic novels have their own art and kind of logic and language. Comic books seem to be making their way into classroom and school libraries more and more, and these texts exist in both print and electronic formats. Web comics take the picture and word experience of a graphic novel and transport them to online forums, allowing greater access to the stories they have to tell.

To participate in the learning process, students are expected to engage in school-based reading, usually involving print. However, not all text experiences are the same. Some reading practices involve traditional eye-to-paper textbooks, some require understanding of digital processing and navigation, and other forms of reading operate with texts plus images. Reading these days, it seems, is not just one simple practice with one approach, and it can all begin to sound fairly complicated. How do we possibly teach students the proper way to move through and function in all of these literacy experiences? Perhaps one answer is to be aware of some of the titles on the web that are readily available for students to practice with and engage in.

Mark Waid’s web comic Insufferable plays with the idea of being an online comic book. When clicking to open the first issue, the reader is greeted with the static-filled and strained image of a character’s face. This character addresses the audience with clear text, even though the image is distorted, and the words “Tap, Tap” indicate that the character is aware of a screen, a similar phenomenon to what the reader is encountering. A subsequent click reveals a more clarified image. In this way, the image, text, and medium work together simultaneously to act like a seamless narrative, while conveying a sense of self-awareness.

Frank Serafini, in his book Teaching the Visual, talks about the aspects of graphic novels and comic books, like the space between panels, and how these features create meaning. The gutter, or space, can translate to time that has passed, or changes in perspective. This works in a way that is similar to the breaks between chapters or some paragraphs in stories or novels. Serafini also discusses using still images to connect to moving images.

In the case of a graphic novel, the reader’s eye may first travel to the words on the page to take in the written thoughts and narrative, or the reader may first focus on the images. Many readers who are not acquainted with comic books may find themselves reading the words first. The images may themselves be simple or complex, depending on the level of detail the author chose to include. Images may exist in color, which carries a whole array of possible meanings, or they may be rendered in black and white. These choices of color may also indicate time. In the case of a web comic, images and words sometimes appear in a sequence, calibrated to the order the author intended the audience to see them.

A reader, for instance, may click once and be presented with an initial image and set of words. A subsequent click may add a response or extension to the original phrase. Aside from right to left directionality and title page to last chapter reading practice, this brand of step-by-step revelation and understanding is not generally encountered in traditional prose texts. This interplay of the hidden and revealed can be employed to create a sense of tension, suspense, or even humor. In the case of a nonfiction text, large amounts of information can be broken down in similar fashion to the complementary nature of textbook features, such as graphs and charts found in science texts.

Insufferable makes use of this convention. On page 10 of the first issue, one panel is revealed, followed in successive clicks with additional panels to progressively unveil the action. The page number changes as the reader clicks through, and there is a similar “uncovering” experience on page 21 of the same issue. Scott McCloud also provided a timeline comic example with Zot! The reader navigates the web comic by dragging the cursor down and a thin blue line connects each frame of the comic. Some panels are smaller, while others are more extended. The reading experience has a similar sense of progress, since the reading is dependent on the movement of the cursor to access the full scope of the story.

Many graphic novels and comic books appeal to mature readers; that being said, titles like Undead Alice may be suggested for older students. This particular web comic draws on a variety of media to create its message.

Web comics typically use images and words in complementary ways to deliver content, rather than pair inharmonious types of text to elicit emotions. The story a reader uncovers in a web comic is one story, composed of a number of words and images, and potentially includes sounds and film-like images.

Undead Alice uses images, text, and sound to tell its story. The reader must click on a double set of arrows to begin the text, which moves on its own in some instances, and in others depends on the interaction of the reader. The images contained in Inanimate Alice help create mood, tone, and convey a sequence of events, just like any traditional story would.

Scott McCloud, in Understanding Comics, details the ways graphic novels and comics send their messages, discussing the “invisible art” of the picture and text. The reader, according to McCloud, must participate and infer about the events of the narrative, as well as possible time boundaries, as the reader’s eye moves from panel to panel.

Even the font a comics creator chooses can communicate an aspect of mood. In Undead Alice, images wipe on to the screen, some highly visible and some distorted. There is not one particular type of image that is found; photos, diagrams, and shadows work together, while text exists in combination with sound.

On a decidedly lighter note, another web comic example is The Abominable Charles Christopher. Author Karl Kerschl has worked on a number of high interest character-based comic books, such as Gotham Academy and Teen Titans, two DC Comics, as well as Assassin’s Creed, based on the popular video game. This text actually works more like a traditional comic strip than the other web comics explored so far, and some issues are largely wordless. These mostly wordless examples are ripe for opportunity; students can provide captions, word balloons, or write about what they think is happening in the comic strip, citing evidence from the text to support their responses. Wordless picture books are another source of this kind of student work.

The main character of The Abominable Charles Christopher is a young sasquatch, and the comic strip follows his adventures in the forest. Kerschl has been posting sections of the story since 2007 and, as of this writing, the comic strip has continued with updated work. A variety of creatures, including birds, bees, and deer serve as supporting characters for Charles Christopher’s story.

Hopefully, these descriptions show that web comics work on a variety of levels. There is a potential appeal for readers of graphic novels and comic books, as well as an appeal to middle school students interested in digital media. A little exploring on the part of a thoughtful teacher will render many different results, and a process of weeding through will help educators determine which texts are appropriate for their students and which are not. Ultimately, students can build dialogue around the complex nature of the readings and potential connections can be made to those classic works that normally may elicit a groan from reluctant readers.