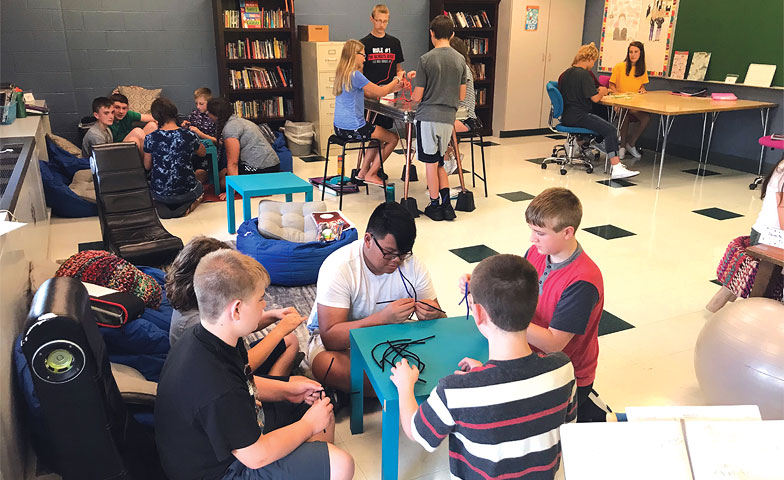 Why it’s not worth getting into a struggle with students

It was the summer of 1998. I lived in a two room apartment with my now husband. The shower was in the kitchen. We drove clunker cars, scrounged change for take-out, and let me tell you, we were living our best life. We were young, naive, and ready to take the world by storm. I had just finished my master’s degree in literature with an emphasis on southern disenfranchised female authors. Maybe not so surprisingly, my new degree was not opening doors for me, so I decided to enroll in the University of New Hampshire teacher education program. The program was pretty progressive, and so my first class was an “outdoor encounter” kind of thing where they drove about 30 soon-to-be educators into the woods of Vermont, dropped us off at the base of a mountain, and told us that we’d be picked up here on Sunday. During this “outdoor encounter,” we were supposedly going to get our first lesson in being a teacher. I was ready to change the world!

What did I learn? I needed to quit smoking, for one. The hike was way outside my comfort zone and ability level. Luckily, a big burly guy named Sturgis carried my backpack for me. I learned that balsamic vinegar improved the quality of almost everything, since we were cooking all of our meals over a fire. I learned that despite my brave front, I was pretty scared that my life wasn’t really sorting itself out as I had planned. Granted, a master’s degree in literature was probably not the greatest plan, but I was beginning to doubt that I was ready for the real world, which was nipping my heels.

On the second night, around the campfire, a veteran teacher was sharing his words of wisdom about classroom management. Most people wanted to know how to keep everything under control. At the time, I was ridiculously naive to the fact that I could ever lose control of a class. I learned the hard way later that summer while I taught summer school, and it almost drove me out of teaching. Only half listening, I heard Charlie say, “The truth is, you just can’t pick up the rope. If you do, it is a tug of war. The fact is, if you get into a battle with a kiddo, and you win, then you really lost. Right? You’ve lost the relationship and the potential for learning. You are also a bully because you used your authority for harm. On the flipside, if you pick up the rope and get into a battle, and you lose, well that’s really bad too. Then, you were just outsmarted by a child, and you’ve lost all your credibility as an authority. If you remember nothing else, remember, you can’t pick up the rope.”

All these years later, I share this story with student teachers, new teachers, and those who have transferred from the high school. The middle is a place where we are continually taunted to pick up the rope, right? Don’t you have days where you are just certain that your students are doing things just to get your reaction? They probably are, and that is why it is imperative that you don’t pick up that rope! A tug of war is one of the quickest ways to wreck any good thing you have going in your class.

The world keeps changing, today’s classrooms (especially mine) are more like a Starbucks, and the work our students can do is pretty amazing; however, they will still be kiddos. They will still try to see how far they can push you, or in this case pull you. Instead of picking up the rope, remember that ego is everything in these adolescent years and provide students with a way out, an escape route. When they are getting ready to lose face, change the state of your classroom. Lighten up. Send the student on an errand. Switch gears or take a brain break. Do whatever you can in your power to let the student escape the encounter with their dignity intact and address the issue privately with the student. Those heart to heart moments can be amazing, and they are opportunities for growth for everyone. Remember, you are on the side of the student, so you can’t be in a tug of war.