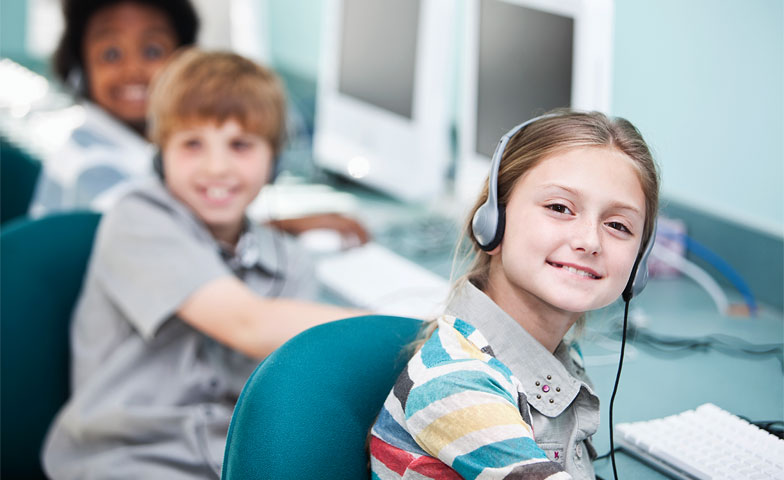 Geographically, it did not make sense. Middletown and Pocomoke Middle Schools, both located in Maryland, are approximately 200 miles away, and students in both classrooms were discussing the same piece of literature. Each student analyzed the author’s style and offered unique takeaways about attributes of the plot. However, there was not just one teacher facilitating the learning experience; instead, there were several teachers. The makeup of students available for partner discussions was also much more diverse than usual.

As a whole, students were experiencing a classroom activity of the future. Rather than hearing the command turn–and–talk with your partner and jotting down notes on a graphic organizer, there was the sound of headphones clicking into Chromebooks. Students began connecting with partners using email addresses while short repetitive jingles echoed throughout the classroom as students connected with eager faces as they appeared on the screens. Greetings were exchanged and instructions were provided from one instructor to students at both schools to open their shared Google Doc. Throughout the remainder of the lesson, students collaborated and kept track of their discussions to display mastery of the posted learning target.

This learning model, as narrated above, is often referred to as distance learning, where a class is broadcasted over the Internet without students needing to attend a physical class. Often found in higher education, attributes of distance learning were used in displaying mastery of Maryland’s College and Career-Ready (CCR) Standards as well as the Maryland State Science, Technology, Engineering, and Mathematics (STEM) Standards.

AMLE talks to Cook, Schmidt, and Shaffer about Distance Learning

Taking into account the age appropriateness of middle school students, the distance model was modified to fit the needs of the students in these two classrooms. Rather than one educator instructing all students, each classroom site was equipped with at least one language arts content specialist, as well as additional school personnel members to assist with technological hurdles. In addition, each school site instructor modeled components of digital citizenship, speaking and listening standards, and ways an author develops point of view.

In education it has been a long held belief that an engaging activity draws excitement with endless opportunities while a disengaging activity produces routine results and minimal creativity.

In two digitally connected language arts classes, students were charged with reading and analyzing the intricacies of a short story with a digital partner who was assigned by their teacher. Over the course of seven 45–minute instructional days, students completed a close reading of a short literary text and discussed it with their digital partner via Google Hangout, an application similar to Skype or FaceTime.

Discussions with unfamiliar partners challenged students in new ways, yet provided opportunities to develop speaking and critical thinking skills. Over the course of one’s schooling in a small community, it is not uncommon to collaborate with the same students and become familiar with them. However, this was quite different because there were few, if any, expectancies.

Two-voice poems, which are written for two people to perform, allow two different perspectives to examine the same topic. The poem is comprised of three columns (e.g., voice one, both, and voice two) to display the two different speakers’ dialogue as well as when the speakers are in unison. Purposefully, the poem is crafted to display characters’ internal thoughts—sometimes directly stated and other times inferred in the text—about the same topic.

At the conclusion of the close readings, students were paired together to display mastery of the point of view standard (RL6) by constructing their own two-voice poem. Individuals were given freedom of choice in selecting a topic as long as it related to the text. Teachers used theme resources and offered comments on digital collaboration documents to direct students to topics that were appropriate for the assignment. Once topics were selected, students were given two sessions to craft their poem and practice their presentations.

Every student in the project divulged his or her satisfaction of working with a total stranger. Many admitted the mysteriousness of meeting someone new made them want to come to school every day. In addition, students revealed that they learned that different people have different perspectives about poetry, and people express themselves in many different ways. Poetry became one of their new ways to display an understanding of a challenging literary text, as well as appreciate multiple perspectives.

In regards to technology, students mastered working with Google Docs and Hangouts. Prior to the activity, students admitted to having minimal, if any, experiences collaborating with another person on an electronic document. This specific opportunity could be used in real-world tasks when colleagues need to communicate with one another. However, some students shared insights about frustrations as well. Internet connections were not always as immediate as a face-to-face conversation and transmission lags were not uncommon.

This particular project was the epitome of integrating College and Career Ready experiences. Collaborating with others digitally is no longer trendy; instead, it is common practice during a variety of every day experiences. Working in pairs and teams to investigate a problem and create solutions is a skill essential to life as a middle school student as well as an adult.

The options are limitless for replicating or modifying the project to meet the needs and interests of your students. Creating two-voice poems was only the beginning for us and our students; the collaborative framework of using Google Hangouts and Docs can include numerous other content areas and different types of learning experiences.