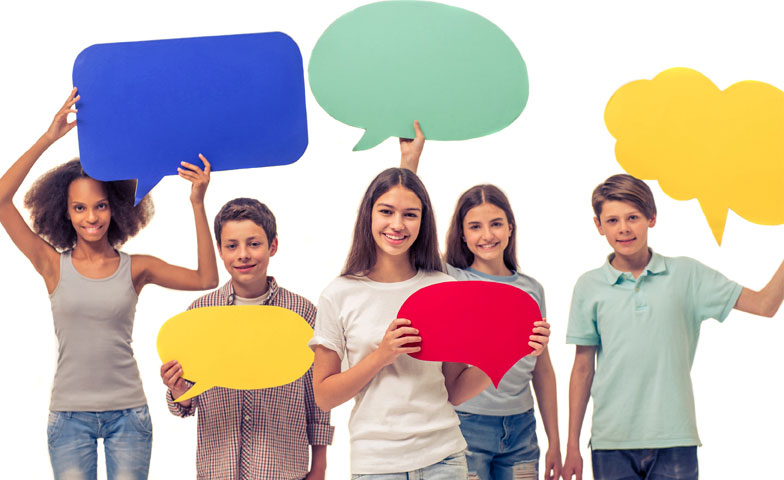 Walk the Walk about Talking the Talk!

Conversation is something that we often take for granted—like air. It swirls around us. We breathe it in. We listen to it as it bends and curves. Our ears hear it. However, even though it is as critical as the air we breathe, we often aren’t really listening. By its very definition and etymology, conversation gives us life and purpose—because according to Merriam-Webster, a conversation is an “exchange of sentiments, observations, opinions, or ideas.” And if we look at the etymology of the word, it’s even more telling. It derives from the Latin “convertere,” which means “to turn around.”

Why are the definition and origin of “conversation” so important to middle level education, in particular? They are vital for a couple of key reasons. First, young adolescents are trying to achieve in multiple areas, and one of those areas is the social-emotional one. That’s why our students need conversational practice (yes, we’re talking about practice) so they can understand what it means to share and “exchange” ideas that may result in a change or “turn” in opinion. Too often, though, the discussions they hear and witness in their communities, on their televisions, in the hallways, etc., aren’t civil, balanced, collaborative conversations during which both parties learn something from each other. Instead, they witness power struggles during which each person tries to win the talking war so their opinion is victorious and the other opinion is silenced or relegated to the shadows. How can we create and promote a positive climate and culture in our schools if that is how they see, experience, and do conversation? How can we implement a Positive Behavioral Intervention System (PBIS), if language and conversation are used to divide and conquer instead of to bring together?

The answer goes back to modeling and practice. Teachers and staff need to be sure that they are demonstrating effective conversational strategies so students can hear and see how it’s done. Verbal and nonverbal cues. Turn-taking. Summarizing. Body language. Politely disagreeing. Affirming. We are the head cooks in the conversational kitchen, and we should be using those dialogue ingredients liberally for ourselves and for our students. We are the models of conversation. In fact, school may be the only place that gives them strong examples of civil discourse and talk. In addition to modeling, it’s about time. Thus, we need to provide opportunities for students to talk with each other in structured and unstructured times—and with our support along the way. We need to ensure that time is afforded in lesson plans for students to converse with each other, and not just at the end of the class (in order to fill up time or because they’ve earned it). Rather, we should see conversation as integral to teaching and learning in the middle grades. Young adolescents are learning the subtle and not-so subtle nuances of language now. We can’t wait until later.

And conversation is also critical for the middle grades because that’s how we create and maintain relationships with the young adolescents we serve. Whether it’s through homeroom or advisory or another less-structured time in the school day, we need to just talk to kids. We need to ask them good, caring questions about their lives—and then hush. Let them talk. Let them share. Stop talking at your students and start conversing. To see where such a conversation could take me, I recorded an interview with my own seventh grader, Parker, and his fourth grade brother, Holden, for your listening pleasure. I asked them questions about early adolescence, school, and their challenges and triumphs—and Parker asked me questions, as well. Get your ears ready, check out the conversation, and enjoy the totally appropriate middle school ending! And to be 110% clear, my sons and I talk all the time, so please don’t think this interview is an isolated occurrence!