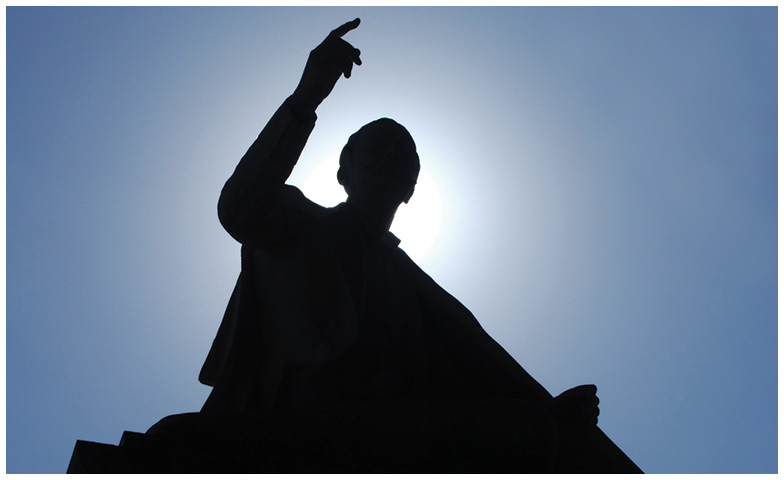 During the middle school years, students are trying to figure out who they are. Their identities are malleable and constantly changing based on different life experiences. Social studies teachers need to utilize activities that build students’ civic identities and prepare them with the knowledge and skills to be future democratic citizens (Clabough, 2017). One area of civic education where students need such learning opportunities is with deconstructing political media messages in presidential commercials.

Presidential commercials often have different goals. Sometimes, they are designed to attack one’s opponent, while at other times a candidate is trying to articulate his or her vision for the United States. Social studies teachers need to set up opportunities for students to analyze these messages.

All presidential candidates articulate an argument for why they are running for the office and how their life experiences have prepared them. These reasons can vary from previous government experience to working in the business sector. Candidates use presidential commercials as the vehicle to convey these reasons to the electorate. The teacher can use “Country I Love” from Barack Obama in 2008 as an example, http://www.livingroomcandidate. org/commercials/2008. After students watch this commercial several times, they can complete the following questions. They utilize evidence from the commercial to support their responses.

Then, the teacher guides a class discussion. The focus of this discussion should be students using evidence with phrases and images from the commercial to support their arguments. For example, the teacher may stress how Obama tries to connect his roots to the work he did in Chicago to help everyday Americans to demonstrate that he understands the needs of ordinary citizens. By examining examples like this, students deconstruct messages within commercials.

This class discussion prepares students for the presidential commercial judge activity. Many contemporary television shows use judges to evaluate the effectiveness of candidates: American Idol, America’s Got Talent, and Shark Tank. With this activity, students score the effectiveness of this presidential commercial to convey Obama’s vision for the country on a scale of 1-10. They also write a solid paragraph explaining their score by drawing on evidence from this commercial. This writing activity helps students articulate ways that candidates convey their vision for the country.

As an extension activity, the teacher can have students view multiple presidential commercials from both Republicans and Democrats that convey a vision for the country and score each commercial on a scale of 1-10. Then, they decide the best commercial from among the group. Some example commercials that may be used include Reagan’s 1984 “Prouder, Stronger, Better,” Clinton’s 1992 “Journey,” and Bush’s 2000 “Successful Leader.” This activity helps students deconstruct the ways candidates frame arguments using words and images. This sets up future class discussions to compare and contrast how both political parties convey different solutions to the country’s needs.

One consistent element present throughout the history of presidential commercials is attack ads. Candidates attempt to undermine the messages and credentials of an opponent by framing his or her policies as bad for the country. These negative messages attempt to reframe the ways in which an opponent is viewed by the electorate.

While Barack Obama ran a more optimistic campaign in 2008, his reelection campaign in 2012 had a more negative tone. He consistently tried to paint Mitt Romney as an out of touch elite that only cared for the wealthy. There are several commercials that the teacher can use to capture ways the Obama campaign attempted to frame Romney such as “The Cheaters,” “47 Percent,” and “Big Bird.” This shows that all candidates rely on negative campaigning to some degree.

First, students watch “Big Bird” a couple of times to catch the ways that Romney is framed. Then, in groups or individually, students can focus on a different element of this commercial and answer the questions in the graphic organizer above. The completion of this graphic organizer requires research into issues of the 2012 presidential campaign.

The questions in this graphic organizer help students explore the reasons certain media messages are structured in particular ways.

Then, in a class discussion, groups or individuals can share the elements of the commercial that they analyzed and researched. This allows students to learn from their peers. The teacher focuses the discussion on the ways the Obama campaign used words and images from this commercial to paint Romney as only worrying about the wealthy. This activity builds students’ research skills as they contextualize issues within a campaign that drive an election cycle.

In this article, I provided two activities middle school teachers can implement to analyze political media messages in presidential commercials. These activities help students decode the ways words and images are organized to positively frame a candidate while undermining an opponent’s messages and policies. They can also be adapted to examine presidential commercials from other election cycles. These learning experiences prepare students to be responsible consumers of media by analyzing messages and then researching claims. With election cycles on any level, students are better prepared to make informed decisions about candidates and public policies to support (Engle & Ochoa, 1988).

Jeremiah Clabough, Ph.D., is an associate professor of social studies education at the University of Alabama at Birmingham. Check out Dr. Clabough’s book, When the Lion Roars Everyone Listens: Scary Good Middle School Social Studies, in the AMLE online store.