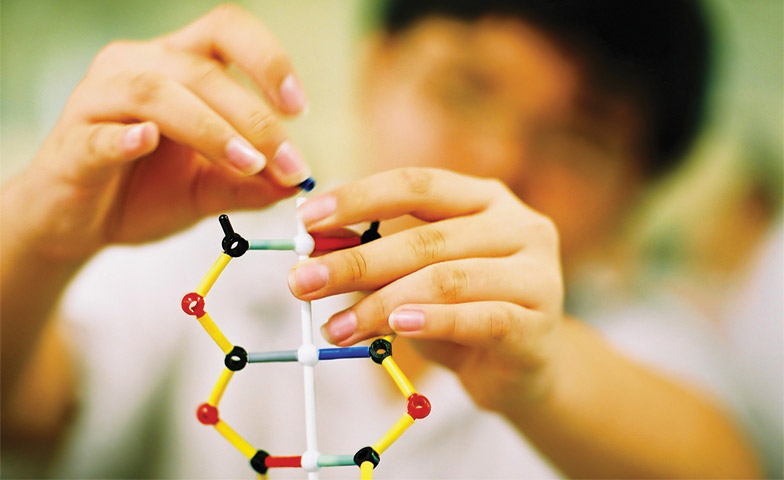 Turning up the heat to prepare students for the future.

Berwick, a K–8 school in Columbus, Ohio, has enjoyed a strong legacy of success; however, our learning community came together to reinvent the future, and the result was a new vision, mission, motto, partnerships, paradigm, and energy. We discovered that to get STEAM, we had to start the fire, turn up the heat, and move the mission with the momentum!

Berwick did not happen upon a STEAM focus by chance. Our school had been re-launched by our district in 1982 as an alternative school with a math, science, and environmental studies focus. Recognizing the growing gap between job openings in STEM (science, technology, engineering, and math) fields and qualified applicants to fill them, we considered preparing our students to fill those voids and to explore what our historical identity meant in this 21st-century new reality.

Starting the fire wasn’t hard—the school staff was hungry. When I came on board as Berwick’s principal, they told me they wanted us all to answer two fundamental questions: who are we and who do we want to be?

Using principles from Mark Sanborn’s book The Fred Factor and from the work of John Kotter, I harnessed the staff’s energy and enthusiasm and directed it to create a new shared vision. I went in believing strongly that everyone makes a difference and that success is built on relationships. I recognized the sense of urgency handed to me by my staff and realized that I already had a guiding coalition that could move the work forward. The next steps were to collaboratively develop a vision and strategy, communicate it, and empower the staff, parents, and students to act.

We didn’t want to be just another STEM school. Our students were exuberant, creative, athletic, dynamic, artistic, musical, and so much more. We decided that we had to put the “A” in STEM to make STEAM. From there we developed a schoolwide theme that incorporated what we wanted and what we knew it would take to get us there: “We’re Building STEAM: One Extra Degree Makes a Big Difference.”

We used 212: The Extra Degree by Sam Parker and Mac Anderson to keep us motivated and ever mindful that going that one extra step would give us enough power to keep moving our vision forward. With that foundation, it was time to turn up the heat.

I presented a lesson design template akin to a web with STEAM at the center and felt a cool breeze of resistance blow through the room. Clearly we were not ready to have the “integrate-STEAM-into-your-lesson-plans” conversation yet. Lesson for me? Wrong approach. But that was OK! It was important that teachers not see this as something extra, an add-on to the teaching of required learning standards. I didn’t want them to think I wanted an immediate overhaul of their current instructional practices.

We began having strategic thinking sessions with staff, students, and parents. In those sessions, we explored our core beliefs and turned those beliefs into draft vision and mission statements. Once our collaboratively developed vision, mission, and motto were crafted, we began seeking expert advice on the STEAM concept.

Building STEAM could and should take time. My guiding coalition and I needed to start by building interest and enthusiasm for this paradigm shift. We needed to show teachers how they were already “doing STEAM” in many ways.

We brought in our district and local university’s science guru, Trudy Giasi, to coach us. She taught us that STEAM is not a packaged program, but a mindset that embraces authentic learning, the design process, and 21st-century skills called the 4Cs—Collaboration, Creativity, Communication, and Critical Thinking—in all that we do. She opened our eyes to the fact that technology is more than a computer, and an engineer is more than someone who wears a hard hat.

At the beginning of the school year, with Trudy and key teachers as co-leaders, our staff attended a day camp where they experienced a design challenge and began identifying the 4Cs in their current professional practice from kindergarten through eighth grade. The wheels began turning like crazy and, not surprisingly, some of the first ideas that came to them were programmatic in nature. It was time to move the mission with the momentum.

Moving the mission involved staff volunteering to run STEAM clubs and reaching out to local businesses and organizations for possible partnerships. In addition to overnight camping trips that our school had taken at various grade levels since 1982 and a robotics course taught in sixth grade, teachers stepped up to lead new clubs and initiatives.

In one year, we added a technology club, recycling club, eco-fashion club, photography club, and garden club. We started STEAM Mates, a cross-grade level collaboration where, for example, eighth grade teachers had their students partner with primary classrooms to do projects. One of our PE teachers volunteered to tutor in math during a free period, because he had a math degree.

The spirit of creativity, communication, critical thinking, and collaboration had begun to rise in new ways at our school. We developed partnerships with The Columbus College of Art and Design, Franklin Park Conservatory, Black Data Processing Associates of Columbus, The Dick and Jane Project, local fashion designers Sarah K and Crys Darling, a former BBC editor, and others who got excited about what we were trying to build and wanted to join us.

We had hit 212 degrees and we were moving fast! By the end of the school year, our work culminated in a STEAM Night that included design projects, experiments, and experiences throughout the entire building and across all grade levels and content areas. We had an eco-fashion show. Students sashayed down the catwalk to the tunes of original songs written by their peers that The Dick and Jane Project made into an original CD. Those songs ultimately made it to local airwaves. Artwork adorned the ceilings, halls, and walls, and design challenges and experiment results were everywhere for our parents, students, and community to enjoy.

Getting What You Want

We were building STEAM, and it was a sight to behold. We started the fire, turned up the heat, and moved the mission with the momentum. Without purchasing a program or being awarded grant funds, the Berwick learning community created a STEAM focus using the talent, creativity, dedication, and leadership of staff, students, parents, and community partners. We learned that you can use what you have to get what you want.