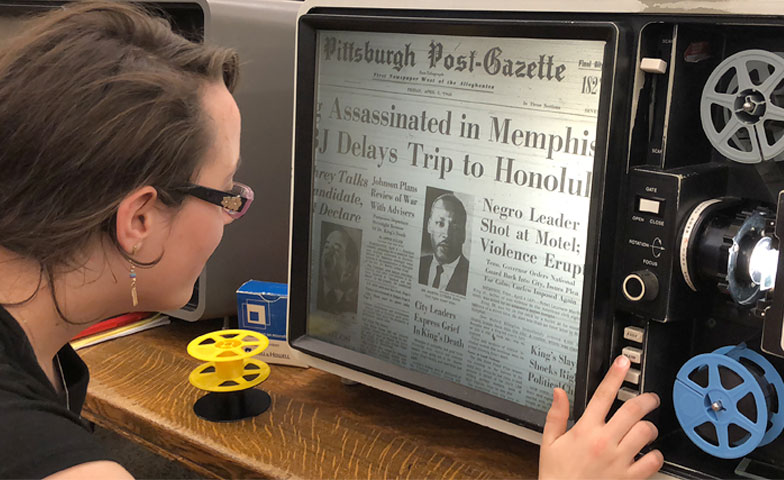 Using a microfilm machine for the first time…

Holding an authentic newspaper from 1941…

Facetiming across the Pacific Ocean, bridging generations, cultures, and language…

Visiting the largest library in Pittsburgh to conduct research…

Becoming published authors of an iBook downloaded across 4 continents…

These were just a few of the unique learning experiences for our eighth graders last year and this year on Team Heinz at North Hills Middle School. Connecting with family members and with others in their community or around the world is not something that one normally gets to do in a middle school setting. Yet, frankly, this is one experience that we both envy.

Both of us were not fortunate enough to be able to gather stories from those who lived through historic events. One of us did get to interview his 95-year-old-grandmother about her experiences as a member of the Women’s Army Corps during World War II, yet the other one of us regrets not talking with her own grandmother about life during the Great Depression.

A summer conversation led the two of us to discuss our upcoming collaborative research unit and how we could change it so students could make connections such as these and insert their own voice alongside a larger narrative. Although our students live in an interconnected world, they sometimes struggle to connect with those who are closest to them.

We decided to help our students build a bridge to the past while obtaining 21st century skills they can use in the future. A bonus to this effort is that they would become worldwide publishers of content.

Last fall, our middle school became a 1:1 iPad school, which gave us hope that our idea could actually come to fruition. Our middle school has a previously established framework to support effective teaming and collaboration, so we, as the English and social studies teachers, had long collaborated on our grade level research project. We had both beamed with pride while writing lengthy prompts with long-winded phrases and twenty-dollar adjectives, yet, upon greater reflection, had little to no meaningful connection to our eighth grade students. We simplified by asking a basic yet profound question, “How do historical events impact individual stories?”

Prior to the December holiday break, students learned about the project. They were to take time during the break to connect with relatives and figure out what significant event they would want to research and who they would want to interview. After the break, students watched oral history interviews as guides and began to write their interview questions in our classes. They then connected with their family or community member and conducted their interview.

With the assistance of our library/media specialist and special education teacher, students then researched and cited the historical events that their person lived through and prepared to integrate their interviews and research into a cohesive explanatory essay that was meaningful and met and exceeded the Pennsylvania Core Standards.

Many students went above and beyond with their projects. Several students elected to interview grandparents and great-grandparents on the topic of the Great Depression and World War II. The Vietnam War was one of the more prominent topics as well. Still, some students reached out to family members around the world, with one student interviewing a relative about the first post-apartheid election in South Africa, while another interviewed her grandfather about living under Mao during many of his reforms.

Some topics included significant tragedies including a professor at Kent State during the 1970 shootings, a Holocaust survivor now living in Washington state, a father fleeing Vietnam during the war, a New York City emergency call center employee on 9/11, and a Washington, D.C. air traffic controller on September 11, 2001, just to name a few.

Some topics offered local connections, including the closing of a local theme park that was a major part of the community, a record-setting blizzard in the city, the decline of the steel industry, and how flooding impacted the region at various times.

No matter the topic, students reported an underlying theme: they became more connected to those they interviewed and took a greater interest in their topics. The apathy we saw while the students researched topics concerning the westward expansion era of our country was now gone, and engagement and interest took its place.

Our roles in this project was that of guides of historical research and oral history, and on the educational technology side, developing and releasing our class iBooks. Last year’s four volumes were released on the Apple iBooks Store in April 2017, and our next volume will be published in April 2018.

Students certainly took ownership of their own learning, while being guided by us, their families, and our community. The community stepped up as well to contribute to student learning, which was refreshing for us all.

We were fortunate to be able to complete this project a second time with the assistance of the AMLE Collaboration Mini-Grant. With these funds our students visited the largest library in Pittsburgh and found sources and specialized expertise that they could have only discovered at a major research library. We were also able to purchase much-needed equipment to aid in recording.

While the project was certainly a success last year, this grant allowed us to offer our students an experience that they never would have had otherwise.

It will come full circle when the students “give back” to the community members who assisted them as we work on creating our second iBook series that archives the audio of astounding stories and personal contributions to our local, national, and world history. A bridge was truly built using oral history, primary source research, a team of educators, and a grant provided by AMLE.