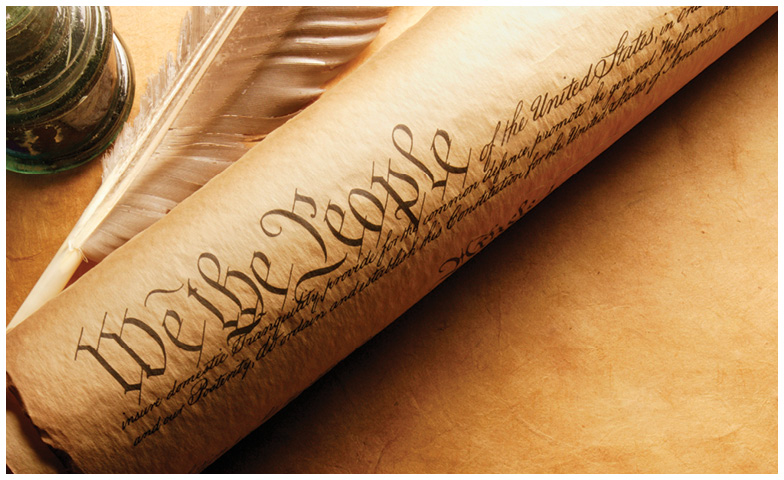 “We the People of the United States…” Seven simple words. Words that were meant to bring unity to a young country that was floundering a bit in its early stages. Words that will get many adults (ages 35 and up) to begin humming a tune they learned as a child from Schoolhouse Rock. Words that most Americans today immediately connect to the United States Constitution, or is it the Declaration of Independence? No, no, it’s from the Constitution, right? Bottom line, we recognize the words, but do we really know what they mean?

To most eighth graders, the Constitution is just an old document that has something to do with our government. To be fair, they are correct on both accounts, but as a teacher of history, obviously I’d like to have them see it as something a little more significant. The struggle I face each year as I introduce the Constitution is in getting the students to identify and appreciate the historical significance of what the Constitution says, especially as it applied to the time it was created, of course, but also to see it in a more relevant and contemporary sense. You see, as I try to explain to my students, remembering who won the American Revolution might not save you in 2020, but knowing what rights are protected by the Fifth Amendment…well, that just might.

This has led me to teaching the Constitution in a different way over the past few years, trying to get the students to see that the founding fathers were writing this document not just for the citizens of the 18th century, but as something that would be able to stand the test of time. There was no blueprint for such a document; it needed to be specific enough that it would guarantee certain basic rights, but vague enough to encompass things like Internet privacy and same-sex marriage (things that probably weren’t at the forefront of James Madison’s thoughts). It was destined to be a living document that could be amended, but not so easily that we would have 632 amendments convoluting the overall essence of what the document stood for. This was a tall task, but an exciting one as well.

So, after taking a long look at how I had taught the Constitution in the past, I decided to condense my teaching on the historical background of the Constitution. Providing background information on what the intentions of the document originally were and the historical circumstances that surrounded the creation of the document is certainly important. However, what I thought was more important was to dedicate the majority of my time in the unit helping my students understand that they were also considered in the “We” of We the People.

The ensuing project became known as the Social Revolutions project in my classroom. After looking at some historic Supreme Court cases and identifying how many of the amendments had been used in the past to protect the rights of American citizens, I had the students start to list current issues that they thought were violations of American’s rights. Often these brainstorming sessions are dominated by issues that are currently in the news. This year was no different, with many students showing interest in mandatory vaccinations in the wake of the COVID-19 pandemic and police brutality and social injustice triggered by George Floyd’s death. During the brainstorming sessions, I inevitably hear topics like cyber bullying, gun control, police brutality, and the legalization of certain drugs. I also get students that show a strong interest in discrimination based on race, religion, sexual orientation, and gender. For many of my students, it’s an opportunity to explore, in a safe environment, a topic that personally connects with them. It’s an opportunity for them to see how the Constitution could be used to protect their rights both now and down the road.

During our initial discussions about these topics, I ask students to pinpoint what it is about the status quo of these topics that they are upset about. This follows our common definition of what a revolution is (which is the theme of my class)…people must be upset with the status quo, have a better plan, and do what it takes to implement that better plan. The first part is easy. Most students have no problem identifying what they are upset about in their particular social revolution. The final two parts are where the research comes in. Being able to identify how we can rectify the violation of a certain group’s rights and then using Constitutional amendments and court precedent to implement the change, that’s where the real work begins.

Obviously, these topics are huge and it is easy to get lost in the research, so I try to narrow their focus to one researchable statement. Each student must follow the structured statement of, “Every American has the right to __ blank __ as a result of the __ blank__ amendment.” From here, I am able to eliminate the statement “Every American has a right to own a gun because I said so.” By adding the amendment and researching how it has been used in the courts over the years, this allows the students to see the Constitution, and the rights that it guarantees, as something that does in fact include them, as well as all Americans in the 21st century.

I’m fortunate to have a librarian in my building who also doubles as a research guru. In the past, we have tag-teamed the project, making sure that students have the resources available to help them find reliable and authoritative data to “build their case.” As we were thrust into the remote learning setting during the global pandemic, the research looked a little different. We maintained similar expectations in the research process, but instead of meeting in the library, students were sent to a resource landing page. This landing page provided usernames and passwords to the school-approved databases, as well as reliable news sources and organizations that may be useful during the research process. We continued to teach the how and why of research remotely, but did so over Loom recordings and during live Zoom classes. It was an adjustment for my students for sure, but to their credit, many of them rolled up their sleeves and dove into the research.

Although the students put together an individual final product, they often found themselves collaborating on similar topics. They continued the practice of sharing resources and information during the research process, it just looked a little different while remote learning. Students used breakout rooms during classes and were encouraged to carry on conversations about their topics with classmates on their own time as well. In the end, this is where much of the application of the information takes place. Listening to kids say things like, “…this is ridiculous…that’s such a violation of our rights…” or the conversations that involve one student explaining how a majority decision from a court case 50 years ago could be used as precedent for a situation happening in 2020. It’s the kind of stuff that puts a smile on my face and provides the reassurance that this project is working.

The final presentations for this project usually involve students standing in front of their peers and providing a public service announcement of sorts. In remote learning, this took on a slightly different look. Instead of standing in front of their peers to present, the students were asked to prepare a Loom presentation with visuals (infographics, powerful images, tables, or charts) to present their research to the class. They aren’t necessarily trying to convince each other that their side of the issue is the right side, just trying to explain their perspective backed with some Constitutional evidence on a social revolution happening today. This actually brings up a great opportunity to teach the phrase (and the belief behind it) “I think that we are going to have to agree to disagree…” Teaching perspective, and that there are often two sides to every story, is a big part of teaching American History in eighth grade.

By the end of the project, I always reach out to my students through a survey and have them provide feedback. Although I ask them questions like “Do you think you had enough time to work on this project?” and “How would you have attacked this project differently if you were given a chance to redo it?” The most valuable question for me is my final question: “What was the most important thing that you learned from this project?” I’m always impressed with the answers my students provide. Many students mention their frustration with events that are happening in the world around us, but that they now feel they have knowledge and a solid defense to fight back. Many leave the unit with a fire that doesn’t get extinguished just because the project is over. They are revolutionaries now with knowledge and a powerful defense…the Constitution. You see, the Constitution can just be an old document, written by a bunch of old people, dealing with old issues, or it can be used as a forceful tool to initiate change in the world today. My students learn to think of it in the latter.