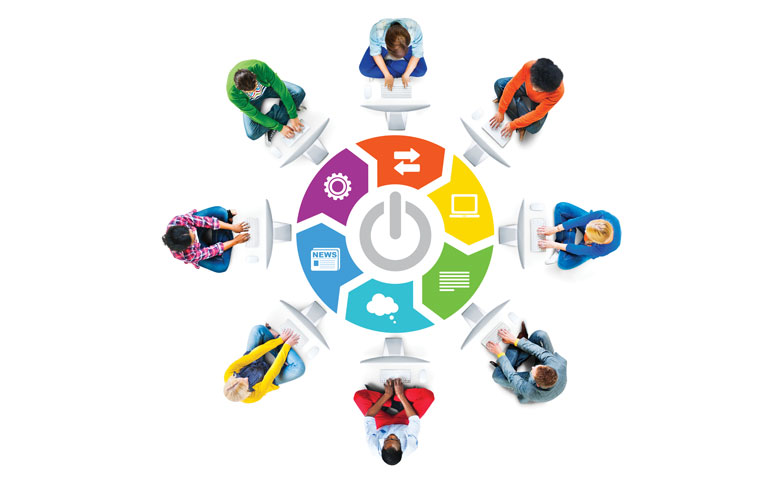 Creating middle schools where every child can speak a digital language

Jade is a quiet 12-year-old girl who has been in my English classes here in Hong Kong for the past two school years. Because of her in-class demeanor, it took me by surprise when Jade off-handedly mentioned that she has over 4,000 followers on her YouTube channel. It turns out, Jade has been teaching many more kids than I have this past year through her online videos.

Jade has a privileged position in our society. Unlike many of her peers, who can only follow the channels of others, Jade has figured out how to mix words, images, sounds, and ideas to effectively communicate her message in her DIY productions.

We have so far arranged our society so that only a privileged few can successfully communicate in the language that is integral to the operation of our cell phones, tablets, smart TVs, and video game consoles. We ensure this continues to be the case by focusing on math facts and syntax when we teach digital programming classes in isolation from the rest of the curriculum, an approach that only appeals to a fraction of our student population. The result is self-evident: the present divide that exists between those who can instruct our devices what to do and those who can only be instructed by them.

Jade has crossed that divide and is fluent in speaking digitally. She is participating in creating a new kind of literacy.

Those who are fully digitally literate are able to read beyond the surface of electronic texts in order to understand how they function. To be digitally literate means that you can craft the words that express your ideas and then connect those words to other texts through a variety of media. The presentation of words has new meaning, as does the way in which the user interacts with the text. Words are increasingly experienced within an ongoing and interconnected digital conversation.

Schools have a central role to play in determining which type of society we will have. Providing opportunities across the curriculum for students to read and write digitally and to speak the language of technology is a defining issue of our time.

Inspired by Jade’s example, my Year 8 English teaching team asked our students this year to create YouTube videos on any topic of their choosing. Essentially, we asked our students to create a visual essay. After about two weeks of continuous work time, in which students were absorbed in their tasks, I was amazed by the results. Many of the students in our international middle school are English as an additional language learners, and they often struggle with completing traditional essays. Yet out of nearly 50 students in my two English classes, nobody “forgot” to finish this assignment. Students who have been reluctant to participate in conversations were drawn into working with others by discovery of their shared interests and a desire to make technology do the things they saw it doing for others.

Our kids gained more because they had the power to create what they wanted in a situation where collaboration and conversation naturally led to a better product. For middle schools today, these 3Cs—choice, collaboration, and conversation—seem to be a particularly strong basis for allowing students to begin to speak digitally.

Another cornerstone in creating schools that encourage students to cross the digital divide is to acknowledge that programming languages are exactly that, languages, and should be taught as such.

I first contended this in a 2003 essay entitled “Teaching Computer Programming as a Language” (published in techdirections), based on my experiences teaching both entry-level programming and English courses. I wrote then that, “In the end, it is language that we are teaching, and that should guide the activities used in our programming courses” (Panell, 2003, p. 26).

Since then, much evidence in favor of my argument has accumulated. There was a study presented at the 2014 International Conference on Software Engineering in which researchers imaged the brains of students learning to program and found that as they wrote in code, the portions of the brain “related to different facets of language processing” were activated (Seigmund, et al, 2014). Another team of researchers, at Embry-Riddle Aeronautical University, tested the use of second language acquisition techniques (SLA) in the teaching of entry level computer programming classes and concluded that, “The results from this project show great promise for the utilization of SLA in introductory programming course content delivery” (Pierce, Griggs, Sun, & Frederick, 2017). I was gratified to see that the team of professors who carried out this latter study cited my original 2003 essay as a rationale for their work when they presented their final results last year (Frederick, Pierce, Griggs, Sun, & Ding, 2017).

The understanding that even complex variations of digital language, such as programming, are still language has great significance for how we teach this topic in our schools. For starters, it means that coding should be taught to a wider group of our students using the best techniques for teaching language more generally, and the earlier this teaching begins the better. This also should include a lot more conversation, collaboration, and building on interests that students already have when they come into class.

A case-in-point is a student named Riche, who enrolled in my elective entry-level web and app design course this year. He became fascinated when I showed the class how to use PhoneGap to put the apps they were creating onto the cell phones of their friends and families to test. Riche likes “memes,” so he started making silly pictures with captions to send out as apps. Although his programs didn’t really do anything, he was enjoying himself; I decided to see what would come of it. Next, he figured out how to make little apps that were practical jokes—they made a message pop up on the screen that said “ALERT: All of your cell phone files are now being deleted!” Since the program wasn’t really doing anything harmful, I let him have his laugh. By the end of the course, Riche had found the code for a Tetris game online and was modifying it to reflect his own unique style for solving puzzles. By letting him build on his own interests, at his own pace, Riche discovered his digital voice.

The goal of patience in an inclusive approach is always to allow more students the time to develop the ability to be part of the digital discussion. A student-centered focus means that we provide opportunities for kids to choose to speak in the digital conversation, however they come to it, and whatever they hope to take away from it.

Middle school teachers should be at the forefront in providing our students with a collaborative environment where the language of technology is integrated into everything they do—as it will be for the remainder of their lives outside of school. Young people in schools should be able to speak digitally within all of the core topics of the curriculum. Children should be given the chance not just to use provided digital texts but to create texts of their own.

An easy entry point to creating texts in this digital conversation is an activity like the one I described earlier, where students create YouTube videos. This allows students to incorporate a wide variety of technologies and digital languages at a pace of their own choosing, and in a way that allows most teachers to be comfortable. Similarly, students could also create animated story boards to gain more knowledge of how to integrate words and digital media.

As they gain skills, students should be challenged to apply their knowledge in a variety of situations. They could create programs that simulate hunter and prey behavior for the science class. In literature, students could analyze both the story and programming of existing game apps with the intention of including these elements in their own creations.

In these ways, technological literacy becomes incorporated across the curriculum, turning school into a digital playground where kids are free to explore. Students could build their own calculating apps, write programs that model the growth of a population of microorganisms, and explore alternate twists to famous events by coding them into a game.

In a fully inclusive and just society every child will be given the opportunity to be part of the digital conversation. Students like Riche and Jade have already crossed over the digital divide, and now are able to speak. We can create that same opportunity for every child in our middle schools today.