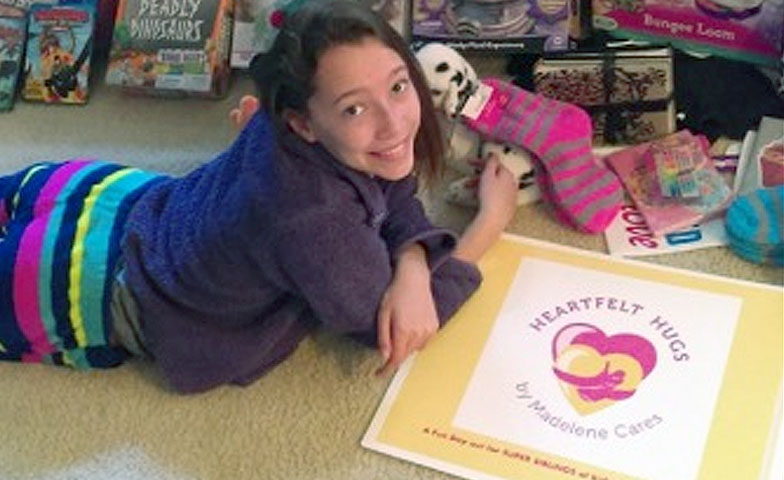 Some start because of something they saw on TV.

Others are moved by the challenge facing a loved one, or one they’re facing themselves.

Over the past 21 years, The Prudential Spirit of Community Awards has heard from thousands of young people about why they first volunteered. One theme comes up again and again: a student saw a problem in their world, then took a first step to help that turned into something more.

It’s easy to think of volunteering as a prescribed set of activities—planting a tree, collecting canned goods. Students can also find their own meaningful ways of making a difference by looking to the world around them and to their personal experiences.

Here’s how it happened for these recent middle level honorees:

“I would tell other kids to volunteer because everybody has a passion. And by working with their passion, they can make great differences in the world.”

Kayla knows firsthand how boring hospital stays can be. She has juvenile arthritis and Crohn’s disease, and during a two-week stay at the hospital, she noticed the limited DVD collection. She donated some from her family collection when she got home. The exuberant response to her small donation made her realize she was on to something. Since then, she’s collected nearly 10,000 DVDs, books and other fun items for hospitals and Ronald McDonald Houses across the United States.

“I volunteer because it helps me learn about people’s problems and how I can make a difference in the world.”

Raghav saw a video about challenges faced by people with limited or no eyesight. He was intrigued by the white canes—namely, how little they did to help users understand their environment. Raghav, a toy-building enthusiast, thought he might be able to do better. He put together a small prototype, then refined it using feedback from cane users and local blind center staff. The result: a device that clamps onto the cane, uses sensors to detect faraway obstacles, and communicates the information through vibrations in the handle. He later secured a grant to make copies.

“I think volunteering makes me feel fulfilled and complete because I’m doing something for other people and not just myself.”

When Madelene was 7, her brother was diagnosed with leukemia. She felt left out and angry—until she went to a camp for kids whose siblings had cancer and discovered she wasn’t alone. Wanting to help others in her situation, she approached a nonprofit that serves families facing medical crises. They went on to partner on developing “Heartfelt Hugs,” a program that provides free bimonthly events and activities for the siblings of kids with critical illnesses.

“I volunteer because I think that we’re never too young to lead, and we can be the leaders of tomorrow. And if you ever see someone in need, you should always help them…every little thing matters. Every little thing you do makes a big difference.”

As a young child, Caleb spotted a homeless man out the car window while his family was driving to the circus. When he learned the man was on the street because he didn’t have a home, Caleb decided he wanted to assemble some care packages for others in the same situation. He went on to make it an annual event and, during one recent winter, handed out 150 Christmas boxes and 100 coats to people living on the streets of Detroit.