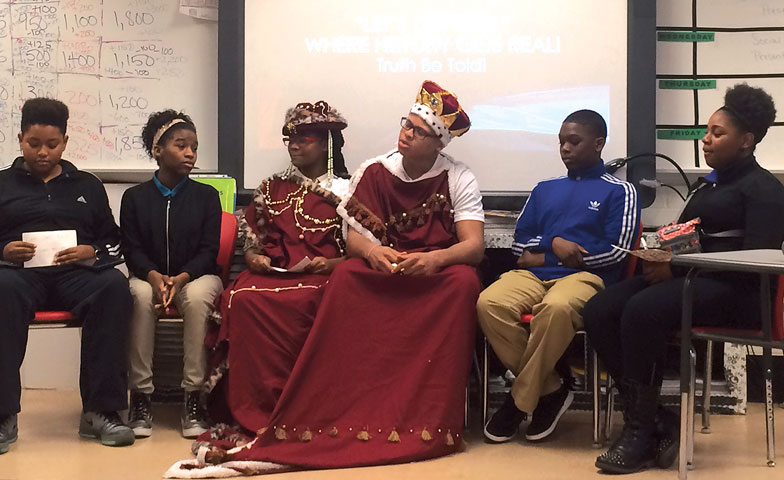 Weaving the fun of cosplaying with social studies gives history a life of its own.

Every summer, thousands of comic book fans make the trip to Charlotte, North Carolina, for HeroesCon. During this three-day convention, hundreds of fans dress up like Batman, Stormtroopers, Spiderman, Iron Man, taking on the persona of their favorite superheroes.

The process of dressing up, creating props, and acting as a character from comic books, video games, or movies is referred to as cosplaying. Cosplaying interjects a great deal of energy into the comic book convention scene, and has the potential of doing the same for your middle grades social studies classes—the difference being that instead of posing as pop culture icons, students dress up and assume the roles of historical figures.

At its core, cosplaying is a form of role playing. People become one of their favorite fictional characters for a couple of days and do their best to act in that role. In adapting the components of cosplaying to social studies, students must complete meaningful research about a historical figure before being able to become that individual. This allows students to gain a deeper understanding of an historical figure’s values.

Justinian and Theodora make a regal entrance as guests on the Let’s Go Real talk show.

Cosplaying activities in social studies also have the potential to positively alter the classroom dynamic. Through the performance aspects of these activities, students become actively engaged in their learning.

Here are three cosplaying activities for the middle school social studies classroom, including the steps to implement each of the activities and an example script.

Abraham Lincoln Gets Some Couch Time

Every weekday, millions of people turn on their televisions to watch Dr. Phil cross-examine his guests and ask that iconic question, “Well, how’s that working out for you?” Viewers are riveted as guests tell their darkest secrets, expose their deepest vulnerabilities, and boast about their greatest achievements.

With this cosplaying activity, groups of students work together to produce a talk show featuring an historical figure. Using primary and secondary sources, students research their figure and then work together to develop questions and answers.

The students present their talk show to their classmates. The show has four hosts—each one is responsible for asking questions about a specific topic, such as culture, government, the military, or even gossip. Another student assumes the role of the historical figure.

The student playing the role of the historical figure should wear a costume that is representative of the time period and character. (This does not exclude the four hosts from wearing costumes as well.)

San Diego ComicCon has become the comic book enthusiast’s pilgrimage. Every summer, fans travel to meet the stars of the newest films and to see the newest merchandise from toy companies. Not only can fans dress up as their favorite superheroes and villains, but they have the opportunity to listen to panels of actors talk about what it’s like to be their character.

In this activity, history meets San Diego ComicCon as students assume roles of historical figures and create their own panels where they discuss and debate historical issues.

Each panel consists of five historical figures and one moderator. Teachers might consider providing students with a list of people to choose from based on the particular topic of the panel, although they don’t necessarily have to be from the same time period. For example, a panel discussing democracy could include the ancient Greek philosopher Plato and the U. S. Founding Father James Madison.

Each group chooses a topic and develops a script that reflects historical figures’ perspectives on that topic. The script should include the moderator facilitating the conversation. Students work together to research how each person would have viewed the selected topic to ensure historical accuracy. All students on the panel should be dressed to represent their chosen historical figure.

When asked to think like historians, students must be able to acknowledge the importance of multiple perspectives. This activity allows students to create a script that shows their knowledge about issues from different viewpoints. Through research, they may find that factors such as social class, politics, religion, and culture influence how historical figures view certain issues.

This activity provides an opportunity for students to see there are multiple perspectives around a topic and that our perspectives influence how we interpret the world around us.

The Vikings: Looking for a Few Good Men and Women

Wander through a comic book convention and you’ll see groups of costumed participants recruiting attendees to join their Klingon, Stormtrooper, or Ghostbuster team. Imagine historical groups holding their own conventions to persuade people to join them.

In this activity, students adopt the roles of members from historical groups and attempt to persuade the audience to join their cause. The teacher breaks students into five-member groups and assigns each an historic faction. For example, one group may be the Vikings and another may represent the Egyptian pharaohs. Students must research different aspects about their assigned group and develop a recruitment script.

The nature of social studies instruction has changed over the past couple of years. The recent education reform movements of the Common Core State Standards and the C3 Framework by the National Council for the Social Studies place a premium on student-centered instruction that promotes students using their higher-order thinking skills.

The three cosplaying activities presented here reflect this type of social studies instruction. Students do in-depth research about historical figures and have an opportunity to present their information in a way that is engaging and illustrates their understanding of people, places, and events. Students can use their creativity while becoming invested in the content, class activities, and learning process.