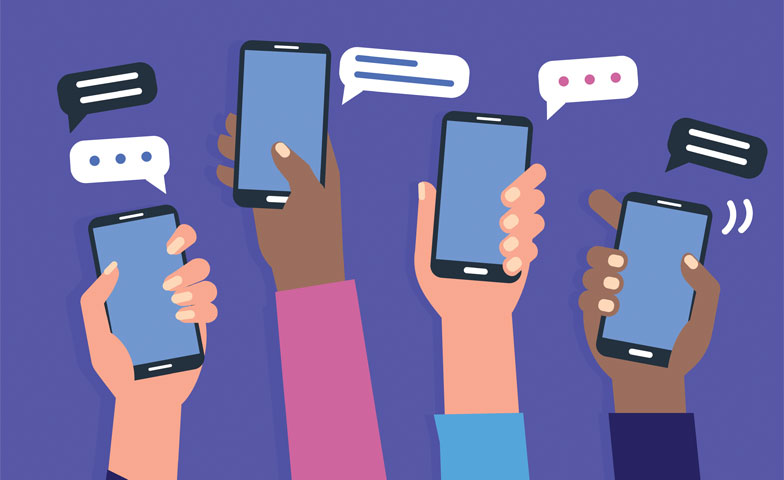 IMHO, LOL, OIC, OMG. If you’ve recently graded middle school or high school writing, chances are you’ve read terms like these; or my favorite, “wtf – idk” which also happened to be an answer on a student’s quiz. As a middle school English teacher, I became more and more perplexed to see students using texting talk on their homework and classroom writing assignments; not to mention answers on the writing portion of the state standardized test. My students were not differentiating appropriate writing contexts. The answers written on the unit test were written the same way they invited their friends to hang @ *$ (Starbucks).

It was 2005, and almost every one of my 140 eighth graders had their own cell phone; much of the time it was a model newer than mine. In my school district, the majority of discipline referrals between 2006 and 2008 were written due to student cell phone misuse. The clever students were able to text answers to a student in another class by blindly texting from their hoodie pockets. Students who could escape teacher view would take a photo of someone else’s completed work to copy later. Sneakiness had a new platform. Confiscating cell phones meant calls l8r (later) from angry parents. My colleagues and I were fighting a losing battle and our students were ROFL (rolling on the floor laughing).

The greatest challenge from cell phones was the birth of text talk. It was the first decade of the 21st century and the plague of textspeak was spreading. Textspeak is not limited to a few localized, quirky acronyms; sociolinguistics accept textspeak as its own genre of reading and writing. The texting language has become so ubiquitous that phrases are being included in dictionaries as an accepted word in the English language. The pervasiveness of texting among adolescents has even earned the term “youth code” because it is the primary language of America’s modern youth (Durkin, Conti-Ramsden, & Walker, 2011).

Those most affected, by far, are adolescents. Kids between the ages of 13 and 17 send an average of 3,364 text messages each month, which is more than any other age group (Cingel & Sundar, 2012). This doubles the amount of text messages sent by adults aged 18–24, which is 1,640. Text messaging is becoming the most preferred method of communication, as exhibited by the 200,000 text messages sent per second across the globe (Grace, Kemp, Martin, & Parrila, 2013).

Chances are, if you teach in secondary education, you are currently dealing with a similar issue. You are not alone. Across America, middle school and high school teachers are simultaneously banging their heads against whiteboards. They are frustrated by the lack of capitalization and punctuation; with each missing vowel their discouragement grows.

There is hope for the English language and optimism for our moldable students. The answer, however, may be one that you aren’t quite ready to accept. The remedy isn’t in a new and improved cell phone school policy, screen surveillance software, or reinstitution of spelling curriculum. It’s in the adjustment of educator attitudes and our understanding of the evolution of language.

Everyone is a new language learner despite cultural demographics, age, or situation. Humans are constantly learning new words, phrases, and terminology, and being exposed to new dialects and accents. Essentially, textspeak is a new and acceptable language constructed by its authors to meet their communication needs. This may be heartbreaking news for the classroom teacher. I know my high school English teacher would roll over in her grave if she thought a lowercase “i” had become an acceptable practice in English language. However, textspeak isn’t any different from other practices that have created an efficiency in communication.

Think of the telegraph. This was a turning point for communication. When communication is costly or cumbersome, abbreviations are necessary. Morse code is a prime historical example. Stenography, or shorthand, also was invented to expedite communication. In 1837 an educator by the name of Sir Isaac Pitman developed the most widely used shorthand system based on omitting vowels; the most popular strategy used in textspeak. A stenotype machine was also invented, which used a keyboard and required the operator to use all fingers and thumbs. Hmmm, that sounds familiar.

Various connections can be made between shorthand and texting. Nearly 300 research studies have been done on the reading and writing of shorthand. The results indicate that, “Good readers of shorthand were also good readers of print,” (Anderson, 1981, par. 3). One study (Bloom, 2010) found that there was an increase in the reading ability of children when they began texting, which again illustrates that an individual must have a solid understanding of language in order to manipulate it creatively.

As educators, we tirelessly teach students to identify the speaker’s tone and the author’s purpose in a text (major components in the Common Core Career and Readiness Standards). Similar to identifying the author’s tone, digital natives are well rehearsed in recognizing virtual body language, or the voice of the author in a text or an email.

Our job is to teach the appropriate utilization and further students’ understanding of language in context. It’s not necessary to know all the latest terms in textspeak. What’s important is that educators are open to the possibilities of translanguaging and the depth of learning that various codes can bring to a classroom.

Code-switching is the skill of transitioning back and forth between formal and casual registers of language depending on context and setting. In an academic setting, which relies on technology, lines between codes can become blurred. This is especially true as more schools are moving to one-to-one technology programs. Students’ academic work is now being housed in the same platform used for their entertainment and social exchanges. This can create blurred lines for adolescent brains.

Teachers need to give explicit instructions about the type of language that is appropriate to use in each classroom platform, like discussion board forums or online communications between classmates. Negotiating the code or allowing students to help decide which rules of language will be followed during certain class activities can assist both students and teachers.

What Can Teachers Do?

Teachers are encouraged to adopt a new flexible attitude towards language and permit students to journal, communicate, and brainstorm in textspeak during appropriate times. If students are journaling, or collaboratively brainstorming for a research project, then their primary mode of communication should be acceptable. For middle and high school students this will most likely not be standard English. Students may find it easier to get thoughts out if they do not have to translate to formal language during the brainstorming process.

Primary language, usually defined by what language you speak everyday or were taught by your parents, does not have to be limited to English, Spanish, or Arabic. Drill down to the actual dialect and register in which students communicate. That is the space where their primary language lies; it’s the voice they hear when they think.

During a research writing process, students will read excerpts from articles and peer reviewed journals. Examine the writing of these documents with students and contrast the language used with your classes’ previous work. How does it differ from higher academic writing? What does the writing style, vocabulary, word choice, and tone say about the author? Students quickly identify the expert tone of the formal writing style, and the credibility easily given to works with specific and well thought academic word choice. This can be done in every subject area and with any writing assignment.

Translating text calls on a student’s highest order of thinking. In order to translate, one must decode, read for meaning, synthesize the information, formulate ideas, then reassemble the information in a new way, while keeping in mind appropriate vocabulary and tone. This function is an excellent form of formative assessment to gauge the depth of student understanding. One way to engage students in this task is to ask them to review recent text messages, or chat history. Ask them to rewrite the message as if they were writing it to the principal or an employer, all the while reviewing the discussion on language registers.

It’s not easy to allow students to comfortably express themselves, while preparing them for a professional world built on written and verbal communication. The key is in understanding the evolution of students and their language, and to constantly be ISO (in search of) strategies to support our textspeaking learners.

Anderson, R. (1981). Research in shorthand and transcription. The Journal of Business Education. 23(6).