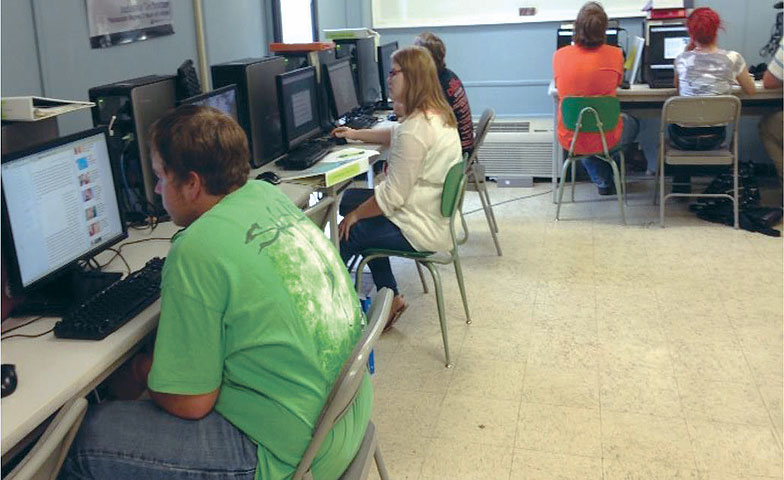 Leveraging technology helped get students back into class and on track.

In a perfect world, school districts would be able to purchase and implement as many resources and as much technology as necessary to help students achieve. However, factors such as budgets and staffing often get in the way.

When we looked at how we could improve student achievement and graduation rates at Walker County Board of Education in Jasper, Alabama, we faced some tough obstacles. Our district serves 7,800 students, 65% of whom are eligible for free and reduced-price lunch. We suffered from attendance and truancy issues. Our graduation rate for the 2010–2011 school year was 73%, which is only slightly ahead of the state average, and our dropout rate was 14%, which is 6% higher than the state average.

Although graduation and dropout rates do not directly apply to middle school students, it is an indicator that our students were struggling—and they were most likely struggling prior to entering high school.

So when the state’s top education official urged districts to rethink school programming and initiatives to include more innovative approaches to supporting student achievement, our district officials knew we had to reinvigorate academic programming to help our struggling students.

We began by transforming academics in our alternative school for middle and high school students whose behavioral issues prevent them from succeeding in a traditional classroom. The goal of the program was to provide additional supports for these students so they can overcome their behavioral issues and return to their original schools.

This lack of instruction hindered students from successfully transitioning back to the original school and thus heightened their frustration level. Most students became repeat offenders and the cycle continued on a downward trend.

Students need to feel successful in order to change their behavior, but as students returned to their original schools, transferring grades and records was fraught with miscommunications and staffing issues.

We decided to implement academic support and instruction that relied on more accessible resources instead of paper assignments and textbooks. We believed that the faster students improved behaviorally and academically, the sooner they could return to their original schools, which would solve our overcrowding issue. Also, the transfer of students’ records and grades would improve. The smoother we made reintegrating students into their original schools, the faster we could have them back in class and succeeding.

Turning Around the Alternative Program

For a fresh start, we changed the name of the alternative school to the “180 Program.” Beginning with the 2011–2012 school year, the students who entered the alternative program had 20 days to “do a 180” so they could succeed in their original schools. To help students do this, we created a more positive school environment and improved academic support.

Students in the 180 Program immediatley start their coursework on the computers, catching up and sometimes accelerating.

Our first change was to switch from textbook-based instruction to an online blended learning instruction model to bypass the issue of students not having their textbooks or assignments. With this change, students now have access to a rigorous curriculum and quality instruction. The online instruction includes more than 160 courses, 5,600 lessons, 200,000 content pages, and 130,000 test items to measure student mastery of subjects in grades 1–12—all of which are aligned to state standards. In addition, the online instruction’s built-in assessment tool gauges where students are academically and then automatically adapts the courses’ learning paths to accommodate students’ skill levels.

The online format also makes the transfer of grades and credits between schools easier, as everything is recorded and kept online. If there is ever a question about a student’s grade, the original school can cross-reference it with the online records.

After seeing how successful online instruction was in the 180 Program, we decided to expand its use to other students.

In our elementary and middle schools, we use the online instruction in blended learning centers to help small groups or individual students who are struggling with particular concepts. We also use it to introduce new concepts to entire classes.

At the high school level, students can take full online courses for regular credit or recover credits they are missing. We even use the courses for grade repair to help struggling students raise their grades and to avoid failing. High school students also are required to take the built-in benchmark assessment three times a year in order to track their improvement.

Our summer school program, which serves about 35–45 students in grades 5–12, uses the online instruction and assessments to help students make up coursework they previously failed or to get ahead for the coming year.

During the 2014 school year, we also used the online instruction to fuel the creation of new programs for older at-risk and credit-deficient high school students: the Hope Academy and the Twilight Knight School. The 42 students enrolled in the two programs during the 2014–2015 school year earned or recovered a total of 199 credits.

Since the changes to the alternative school and the districtwide changes that followed, our overall achievement has improved tremendously. We have seen significant increases in attendance, grades, and the number of students being promoted to the next grade level.

For the 2013–2014 school, we saw a 14% increase in our graduation rate— jumping from 73% to 87%—and our dropout rate fell below the state average to only 3%. After the 2014–2015 school year, our graduation rate increased to 90%. These major achievements have even sparked us to start an additional evening program for students in the 11th grade who want to take extra classes to graduate early.

We adopted a program we used to make school easier for a very specific student population—students in grades 6–12 with behavioral issues—and applied it to students in grades 1–12 and saw amazing results across the board.