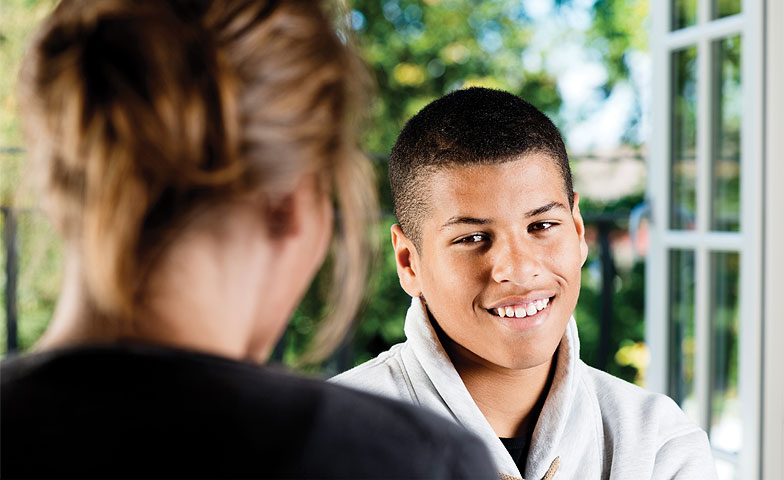 The eighth-grade girl approached Tom Adams in the cafeteria. “Dylan just asked out Samantha as a joke,” she said. “Now he’s laughing about it with his friends, and Samantha is sitting at our table crying.”

Adams, the principal of Newfane Middle School in Lockport, New York, was furious. “Of all the misbehaviors a student could engage in, this was particularly brutal,” he told me. Dylan and his friend Travis had carefully planned the whole thing, even telling Samantha in advance that Dylan liked her. When Dylan asked her out in the crowded lunch line, however, Samantha was hesitant. “Are you serious? This better not be a joke.”

Dylan insisted he was sincere, so Samantha agreed to go out with him. But by the time she returned to her seat, she could hear the boys laughing loudly. When Adams heard what had happened, he hauled the boys into his office. “I saw red. I was feeling anger more than any other emotion, and I started in with questions. ‘How could you? What does this say about you as a person?'” But then he paused to take a few notes on his iPad and saw a tweet he’d read the night before. He glanced at it again and decided to change course.

I’d never met Adams, but the tweet was mine. I’d written, “Don’t ask a child if they’ve been mean to other kids—they’ll just deny it. Instead, say, ‘I’m curious—do you think you’ve been your best self lately?” There was a story behind the tweet. One of my students—a 12-year-old girl named Casey—had told her friend Donna that she was done with her. Casey said, “It’s not just me—no one likes you.” Donna made her way to my office, where she fell apart. She cried so hard she had to lean against a wall for support.

Like Adams, my instinct was to come down hard on Casey, who initially seemed more defensive than remorseful. “Do you have any idea how annoying Donna is?” she asked me. “She won’t take no for an answer, she butts in on every conversation, and she’s always there, hovering.” I suppressed the urge to say, “Seriously? I remember when Katie did that to you in fifth grade. You were miserable, and I don’t understand how you could do that to someone else.” But that would have gotten me nowhere, so I took a different approach. I said, “When Donna told me what you said, my first reaction was confusion. I didn’t think it sounded like you at all. You’ve always been so kind and thoughtful.” And then I asked her the magic question, “Do you think you were your best self?” Casey immediately dropped her defenses. “No, not really. That’s not who I want to be,” she told me. She was upset with herself and wanted to make amends.

Adams took a similar tact with the boys sitting in his office. He took a deep breath and started over, adopting an inquisitive tone. He then asked the boys that magic question. Later that afternoon, he wrote me a note to let me know that inquiring about their “best selves” promoted better dialogue and a heightened sense of reflection. He wrote, “It changed the tone of the entire event. Conversation and tears flowed, and we were no longer talking about character flaws, but about how to make things right, how to live up to what we already possess—the best version of ourselves.”

We both had come to the realization that even subtle shifts in language make a difference when you’re interacting with middle schoolers. They’re acutely aware of the imaginary audience and sensitive to both real and perceived slights. They have to believe that we care about them and want to help them, and they need to feel redeemable. Here are four ways educators can tweak their approach to help students repair damaged relationships and make lasting behavioral changes.

Be intentional about word choice.

Every child wants the adults in their life to see them in a positive light, and that’s especially true when they make mistakes. They read your reactions, looking for signs of disappointment or judgment. They miss nothing and operate in polarities. They think you love them or hate them, find them worthy or inadequate. They don’t think or emote in shades of gray.

If kids believe their character is in question, they get stuck in shame. A little guilt can be productive, but shame is paralyzing. If they conclude they’re “bad,” they lose their sense of agency. As researcher Brené Brown (2015) explains, “Shame is the intensely painful feeling that we’re flawed and therefore unworthy of love and belonging. Something we’ve experienced, done, or failed to do makes us unworthy of connection.” That’s why it’s so important to be curious rather than accusatory, to ask questions instead of lobbing accusations. Be wary of using words like “should” that carry judgment, and avoid language that assigns blame. Don’t say you’re “shocked” or “appalled,” for example, or use phrases such as, “I can’t believe you did that.” Similarly, sarcasm, name-calling, and threats are unproductive and only serve to humiliate students.

Be thoughtful about body language and tone.

When you focus on a middle schooler’s behavior and highlight their inherent goodness, they’re able to see a way forward. A child who feels unconditionally accepted—flaws and all—feels and behaves better. If you want to convey positive regard, pay attention to your body language, facial expressions, and inflections. Kids notice when you shift your body away from them, avert eye contact, raise your voice, or adopt a biting tone. Instead, look them in the eye, ignore distractions, and listen intently to their version of a story. If they feel heard and validated, they’ll be willing to engage in problem-solving.

It’s much easier to talk to a child about mean behavior if you have a pre-existing relationship. If you’ve already built social capital, kids will default to trust and have an easier time considering your perspective. As restorative justice trainer Chuck Saufler (2011) stated, relationship-building is at the heart of everything. “When we rely on genuine curiosity, empathy, and caring, we help students improve relational skills, while also improving their connection with us and to school.” Try to get to know your students before you have to troubleshoot. Ask questions about their extracurricular interests, friends, and academics, and greet them in the halls. You’ll have an easier time appealing to their emotions when they hit a rough patch.

Research shows that if you want students to adopt new patterns of behavior, you need to involve them in the problem-solving process. Don’t simply issue directives and impose consequences. Borrow from restorative justice practices and guide students through a series of reflections. Ask, “What happened? What went through your mind at the time? How do you view the event now? Who was affected by your behavior? What do you need to do to repair the damage?” They won’t be able to restore a relationship if they don’t understand how their behavior impacted someone. They also need to connect with the person they wounded and find out what they need to do to make them feel better. Coach them through the process and keep it collaborative.

Adams and I exchanged a few more notes. In one, he shared that he’d had positive follow-up conversations with the boys’ parents. Ultimately, we came to the same conclusion: When we get it right, kids will do everything in their power to live up to their best version of themselves.

Brown, B. (2015). Daring greatly: How the courage to be vulnerable transforms the way we live, love, parent, and lead. New York: Avery.

Saufler, C. (2011). School climate, the brain and connection to school. Retrieved from http://www.iirp.edu/pdf/Bethlehem-2012-Presentations/Bethlehem-2012-Saufler.pdf