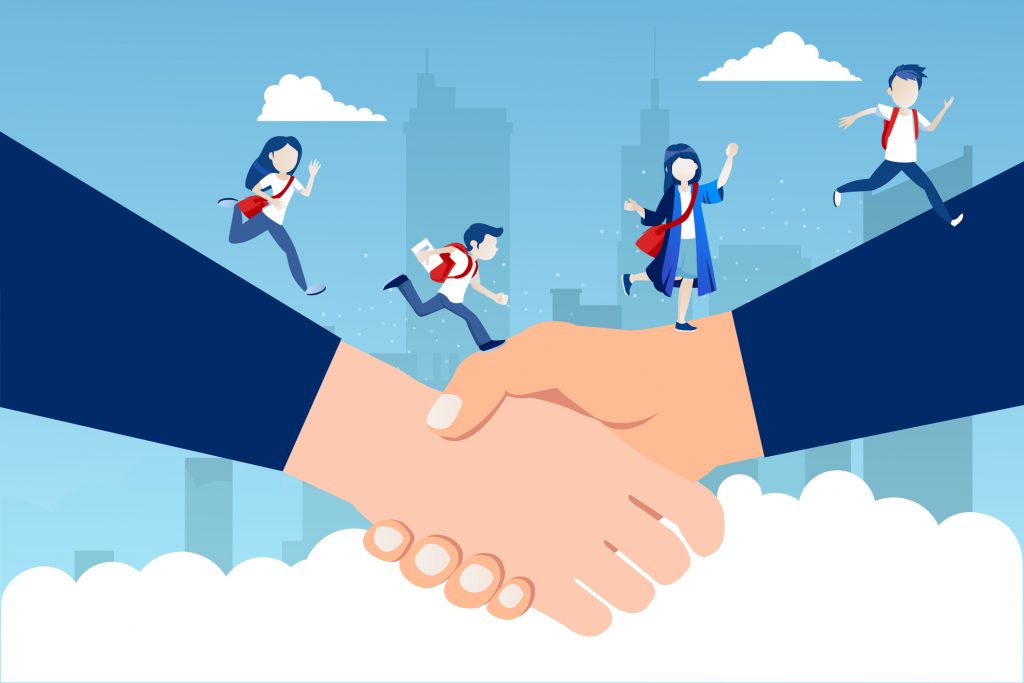 While family engagement is frequently a pain point for middle schools, AMLE has heard from many school leaders that the struggle is especially real this year. As we emerge from COVID, schools are having to reestablish that culture of family engagement – with parents and caregivers who want to be engaged in new and different ways. At the same time, the current culture of political divisiveness has some educators skittish about how and when to engage parents and families.

But the research is clear – positive family engagement is a huge boon to key student indicators like attendance, academic achievement, and feelings of safety and belonging at school. So, where to start? We talked with school leaders about the most effective strategies they’ve used for creating real, impactful partnerships with families.

What do we even mean by “family engagement?”

A key starting point is to define family engagement as a school team and what a good partnership with families will actually look like. “It’s more than the weekly newsletter,” advises Katie Powell, AMLE Director for Middle Level Programs, “schools have to get creative about how to reach families on their own terms.”

That means redefining traditional expectations of parent involvement during the middle grades, says Joe Mazza, principal of Seven Bridges Middle School in Chappaqua, New York. “There is a traditional approach that says, when you get to middle school: parents stop at the door. They’re in middle school now, so they don’t need or want you there. We’re teaching the opposite of that. In fact, they should step in closer. We’re not saying bring them their lunch or kiss them on the cheek at the pick-up line. Instead, we need to help them become experts on this grade level and the developmental changes that are happening with their kids.” That requires a partnership, he explains, one that needs to be tended to carefully. “Building that trust with parents takes years to establish and two second to blow it.”

Most importantly, we need families to be telling us they’re engaged and not the other way around. “If we’re trying to be student and family centered, we should be asking what they need and what works for them,” says Katrina Hill, principal at Community School in Roanoke, Virginia. She points to the example of a recent talent show that they offered twice, once in the morning and again the following week in the evening, allowing more families with varying work schedules to attend.

When establishing lines of communication with families, there’s never going to be a “one size fits all” option that meets the needs of everyone. Instead, it’s about providing a menu of ways to connect. “I like email, but most of my parents don’t,” Hill says. As a result, she tries to communicate in several different ways whether its social media, having students create flyers for upcoming events and printing them to go home, or using text and automated programs like Remind.

Joe agrees that in today’s increasingly virtual world we can’t forget about the value of some “old school” tools. “Sometimes you have to stop emailing back and forth and just pick up the phone. That email chain can be so tone deaf, especially at this time of the year when you don’t know families well yet,” says Mazza, “Being able to show empathy is so important.” He also challenges school leaders to think outside of the four walls of the school building, “not every meeting has to happen here at school. I once met in the breakroom at Burger King where a parent was between shifts. It’s a powerful thing to them when you’re willing to reach out to them on their terms.”

If you do still use email, you may want to look at the analytics, advises Mazza. “I’m guessing less than a third are even opening it.” Instead, he’s found success using Twitter where staff and families are using the same hashtag. The result is a digital newsletter curated by the entire school community.

Mazza and Hill both reflected on the importance of accessibility, that families can easily access and understand communication from the school and have avenues to communicate with the school themselves. For example, the phone service LanguageLine allows school staff and families to communicate in the family’s native language. “It’s something we lean on,” Mazza says. In addition, Community School is being mindful of ways to engage caregivers who may be visually or hearing impaired, added Hill, “learning to be accessible in those ways has been important to us.” Providing descriptions to images and connecting with American Sign Language interpreters has helped make school communication more accessible to families.

It’s important to think of family engagement as a partnership, and not just the school talking at parents and caregivers. This means taking every opportunity to solicit family feedback – and being sure to take seriously and act on that feedback. This can be both formal and informal, and should happen at both the classroom and school-wide level.

“Families appreciate having a voice,” says Hill, “I’m a big fan of Google Forms. It’s important to offer them a way to provide feedback in a way that feels safe to them.” Mazza agrees, adding that it’s also important to take advantage of informal opportunities, such as at the car line. “It doesn’t matter where as long as you get that feedback.”

Creating a culture of engagement

Rather than a separate strategy, family engagement should be woven into the various structures within the school. For Community School, their advisory program simultaneously serves as one of their most important family engagement tools. At the 5-8 school, advisors loop with their student through all four years. During that time, you can’t help but develop strong relationships with families, explains Hill. “After 4 years, you get so close to families. I have parents that come back, not even with their kids, just to visit because it felt like home to them.” Advisors also then become key sources of information about families for other teachers.

School leaders need to foster this culture of engagement by telling parents the story of the school, and how they can be a part of it. For Mazza, it’s about giving parents tools to be extensions of their child’s learning. Every parent can relate to the age-old dinner table conversation that begins with ‘how was your day?’ and ends abruptly with ‘fine.’ Instead, he says, if parents are seeing on social media or directly from a teacher in a text or phone call something that happened or went well that day, they can start that conversation by asking something specific about their day.

This work starts from day one, and it’s important that parents hear from you before it’s time to discuss something negative or a behavioral issue. “I want the first interaction to be positive, so I set aside time to send ten emails to families each day,” says Hill. The notes will include something she noticed about the student, or just a friendly check in.

At the end of the day, it’s all about creating a place that feels like home – for the entire school community. While this may create some extra work for school staff, the benefits will be long lasting for students. Says Hill, “yes we’re teaching them facts and critical thinking. But middle school is less about having them remember those facts forever and instead fostering positive feelings toward school and learning. If they don’t feel good about school during middle school, it’s so hard to regain that later.”